Headlines
Redwan Rahman graduates from FilmdomThe local government minister has instructed to cut the road if necessary to remove the waterRequest to withdraw closure shop at night till EIDThe days of the Western monolithic world are over: PutinLeaders of Germany, France, and Italy in Kyiv to express solidarity‘Presidents of two countries call and pressurized Mbappé’Two U.S. citizens are thought to be missing or taken prisoner in UkraineCOVID: The technical committee suggested lifting some restrictionsPetrol prices hit record highs in the USCanada wants a stern warning against cigarettesThe task force to protect the mountains, demanded the formation of a speedy trial tribunalDepot fire: CID tries to find the cause on CCTVRussian passports are being issued in occupied UkraineFire on Parabat Express: Railroad to Sylhet is normal after 4 hoursAnother 24 children died in Mariupol, Ukraine said
Home More Education 11 students expelled: Family demands to be framed in a sorted case
Facebook
Twitter
WhatsApp
Print 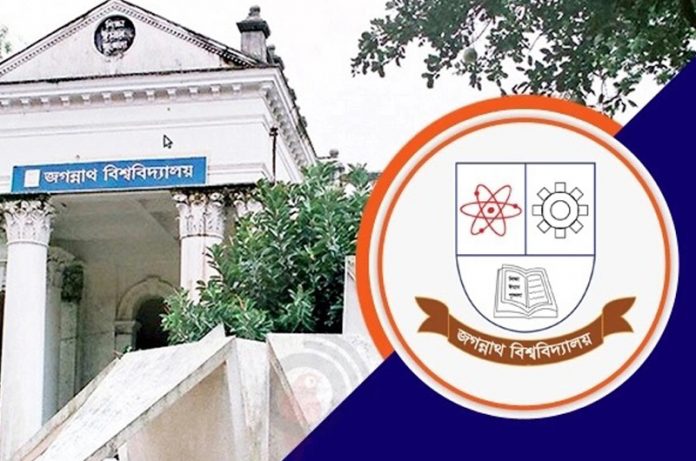 Campus Reporter: Eleven students of different academic years of Jagannath University (JU) have been suspended for tarnishing the image of the country. However, the families of these students say that they have been framed in a case.

It is learned that Raushanul Ferdous Rifat, a student in Accounting Department, came to Dhaka from his village home in Nilphamari on March 3 to take part in the first class of university life. Since there is no residential hall for students in this university, he grew up in a mess adjacent to the university. However, less than 20 days later, on the morning of March 24, a team of Kotwali police raided the mess and arrested 12 students including him on suspicion of tarnishing the image of the state and chanting anti-government slogans. They were later remanded in custody for three days on a court order.

Meanwhile, 11 students were also temporarily expelled from the university for allegedly tarnishing the image of the university with anti-government slogans. The university authorities have to face criticism in this regard.

However, on Tuesday (April 5), Raushanul Ferdous Rifat’s father, Morshedul Karim Kallol, president of Awami League, ward 7, Paschim Chhatnai Union, Dimla upazila, Nilphamari district, came to the university’s proctor’s office and claimed that his son was completely innocent. He has been framed in a sorted case. Even before he was admitted to the university, his son was a student of Chhatra League and had never been involved in Shibir politics.

Meanwhile, President of West Chhatnai Union No. 1 Wahedunnabi and General Secretary Zafar Ali said in a written statement that Raushanul Ferdous Rifat was an active member of Rifat Union Chhatra League. In a separate statement, the convener of the Upazila Chhatra League Abu Sayem Sarkar also said the same.

Not only Rifat’s family, but also the family of Abdur Rahman Oli, a newly admitted in the expelled political science department, has made the same demand. Oli’s father said. Jahangir Islam is a heroic freedom fighter.

University Proctor Professor. Mostafa Kamal said that allegations of misconduct have been made against the accused students, which is anti-government. If they are involved in such malpractices, it tarnishes the image of the university. Therefore, an investigation committee has been formed by expelling them temporarily. They will get back their scholarship subject to court bail.

University Vice-Chancellor Prof. Imdadul Haque told that the police arrested them on charges of anti-state activities. The same charges led to their temporary expulsion from the university. If the court grants them bail, or they are found not guilty, their expulsion order from the university will be revoked. There will be no problem with this.