Headlines
Redwan Rahman graduates from FilmdomThe local government minister has instructed to cut the road if necessary to remove the waterRequest to withdraw closure shop at night till EIDThe days of the Western monolithic world are over: PutinLeaders of Germany, France, and Italy in Kyiv to express solidarity‘Presidents of two countries call and pressurized Mbappé’Two U.S. citizens are thought to be missing or taken prisoner in UkraineCOVID: The technical committee suggested lifting some restrictionsPetrol prices hit record highs in the USCanada wants a stern warning against cigarettesThe task force to protect the mountains, demanded the formation of a speedy trial tribunalDepot fire: CID tries to find the cause on CCTVRussian passports are being issued in occupied UkraineFire on Parabat Express: Railroad to Sylhet is normal after 4 hoursAnother 24 children died in Mariupol, Ukraine said
Home More Environment 25 ‘hit islands’ in Dhaka city
Facebook
Twitter
WhatsApp
Print 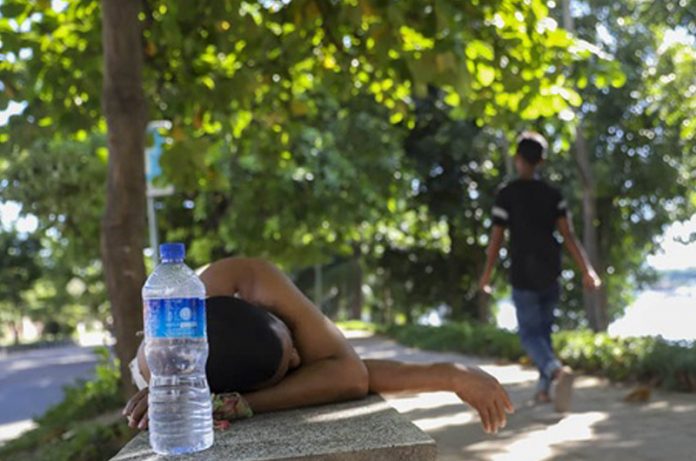 Senior Reporter: A study has identified 25 high-risk areas in Dhaka due to the heatwave due to the surrounding conditions. Researchers have named these areas ‘Hit Island’.

The Bangladesh Red Crescent Society, the German Red Cross, and the Bangladesh Meteorological Department jointly conducted a similar study on the heatwave in Dhaka entitled ‘Feasibility Study on Heat Wave in Dhaka’. The research report was published last September.

Mohammad Shahjahan Saju, assistant director of Bangladesh Red Crescent Society and project coordinator of Forecast Based Action, said that they have tried to create a ‘hit island’ in Dhaka using GIS software.

“This research has been done experimentally in Dhaka. The ‘hit islands’ of the metropolis have been identified in the trend of rising temperature in Dhaka. ”

The hit islands of Dhaka

Experts are seeing the trend of heatwaves in Dhaka in recent years due to unbearable heat. The average temperature in the Heat Islands ranges from 29 degrees Celsius to 34.5 degrees Celsius. The heat in these densely populated areas then goes to the stage of heat flow.

Senior meteorologist at the Meteorological Department. Abdul Mannan said, the temperature is rising all over the world, Bangladesh is also rising. Due to this, the condition of ‘heat wave’ is also increasing.

According to him, the trend of heatwaves in Dhaka city will continue. At the same time some areas, where the heatwave will go beyond tolerance. Where there are tall buildings, factories, or densely populated areas.

Shahjahan Saju said, “I have done piloting this year. Now it needs to be done on a larger scale. There are plans for this. ”

How hot it is

>> In 2014, the temperature in Chuadanga was recorded at 42 degrees Celsius. In the same year, the maximum temperature in Dhaka also rose to 40 degrees.

The heat flow is increasing and expanding

Meteorologist Abdul Mannan said that ‘heat wave’ occurs more in April-July. There is a similar trend in September-October.

Even at the end of September, the temperature in many places in the north is close to 36 degrees Celsius.

Mannan said, “We are seeing a gradual increase in the risk of lightning in recent times, along with the hit web trend. The last two years have seen quite a bit in July. The time-space change is that the hit web has not dominated so much in the last few years during the pre-monsoon period. There were several hit waves this year, especially from the last week of March to May. Four of them were very strong, with long periods.

He said densely populated areas of the country’s major cities, including Dhaka, are slowly becoming prone to ‘hit web’.

Mannan said, “Chittagong, Dhaka, Khulna, Barisal, and Rajshahi – these city areas are slowly becoming riskier and riskier. Among the places where there was no heatwave was Sylhet. Due to heavy rainfall and local weather conditions, the hit web could not be seen. In an analysis, I saw that the trend of hit web in Sylhet region is increasing every year. The hit webs that happened this year too, all of them were up to Sylhet. Earlier it was not evident in the Chittagong region. This year it was extended not only to Sitakunda but also to Rangamati; It has risen to 39.3 degrees. ”

For those at risk, want help

Meteorologist Abdul Mannan thinks that it is time to take various initiatives to reduce the risk of disasters considering the issue of heat flux.

“People at risk need to be warned,” he said. There is the issue of saline, drinks, medicine, and financial assistance if needed. ”

Although the ‘heat wave’ is a weather event, it is increasing due to global warming. Many people have died in heatwaves in Canada this year.

There are many kinds of difficulties in the heat flow, special problems are caused by the jobless and day laborers. There are health risks to the elderly; Many suffer from diarrhea, malnutrition, and malnutrition.

Mannan said, “Such an unusual phenomenon, the weather web forecast will take the suffering of the people on the hit web, the heatwave forecast will be needed; At the same time, those who are at risk will need help. ”

Highlighting the research experience, Shahjahan, Assistant Director, Red Crescent Society, said, “I am in touch with the Department of Health. Many do not understand why the city is getting sick. There are different types of diseases in humans, many times heat stroke, we need to be aware of what kind of measures can be taken for this. ”