Headlines
Redwan Rahman graduates from FilmdomThe local government minister has instructed to cut the road if necessary to remove the waterRequest to withdraw closure shop at night till EIDThe days of the Western monolithic world are over: PutinLeaders of Germany, France, and Italy in Kyiv to express solidarity‘Presidents of two countries call and pressurized Mbappé’Two U.S. citizens are thought to be missing or taken prisoner in UkraineCOVID: The technical committee suggested lifting some restrictionsPetrol prices hit record highs in the USCanada wants a stern warning against cigarettesThe task force to protect the mountains, demanded the formation of a speedy trial tribunalDepot fire: CID tries to find the cause on CCTVRussian passports are being issued in occupied UkraineFire on Parabat Express: Railroad to Sylhet is normal after 4 hoursAnother 24 children died in Mariupol, Ukraine said
Home Headlines 50 killed in mosque attack in Kabul, Afghanistan
Facebook
Twitter
WhatsApp
Print 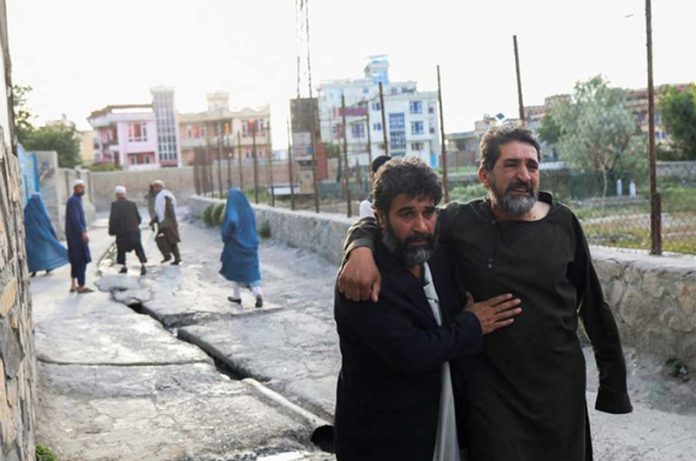 Md. Ashraful Islam: A powerful blast at a mosque in the Afghan capital, Kabul, has killed at least 50 worshipers, the mosque’s imam has said.

The bomber struck shortly afternoon in front of the Khalifa Sahib Mosque in western Kabul, according to Besmulla Habib, a deputy spokesman for the Afghan Interior Ministry. He said 10 deaths had been officially confirmed.

The bomber struck shortly afternoon in front of a gathering of worshipers at a Sunni mosque. The imam of the mosque, Syed Fazil Aga, said they thought a suicide bomber had entered the gathering and detonated his explosives.

“Black smoke is spreading,” he told Reuters news agency. There are only corpses and corpses all around. ” Syed Aga said his nephew was among the dead. “I survived, but I lost my loved one,” he said.

A local resident said he saw injured people being taken away by ambulance. “There was a loud explosion, it was as if my eardrums were torn,” he said.

The Emergency Hospital on the outskirts of Kabul said 21 people were being treated. Two died on arrival at the hospital.

A nurse at the hospital said some injured were in critical condition. A health official said 30 bodies had been taken to the hospital so far.

Taliban spokesman Jabihullah Mujahid issued a statement condemning the attack and said those responsible would be found and punished.

It was not immediately clear who was responsible for the attack. There have been a number of such attacks in Afghanistan recently. The militant group Islamic State (IS) has claimed responsibility for some attacks.

The most recent attack took place last Friday. International officials and analysts say the militant group is still a challenge to the Taliban regime, despite claims that the country has been secured since the Taliban seized power in Afghanistan in August last year.