Headlines
Redwan Rahman graduates from FilmdomThe local government minister has instructed to cut the road if necessary to remove the waterRequest to withdraw closure shop at night till EIDThe days of the Western monolithic world are over: PutinLeaders of Germany, France, and Italy in Kyiv to express solidarity‘Presidents of two countries call and pressurized Mbappé’Two U.S. citizens are thought to be missing or taken prisoner in UkraineCOVID: The technical committee suggested lifting some restrictionsPetrol prices hit record highs in the USCanada wants a stern warning against cigarettesThe task force to protect the mountains, demanded the formation of a speedy trial tribunalDepot fire: CID tries to find the cause on CCTVRussian passports are being issued in occupied UkraineFire on Parabat Express: Railroad to Sylhet is normal after 4 hoursAnother 24 children died in Mariupol, Ukraine said
Home Crime 9,47,600 fines in 2419 cases for non-compliance with traffic laws
Facebook
Twitter
WhatsApp
Print 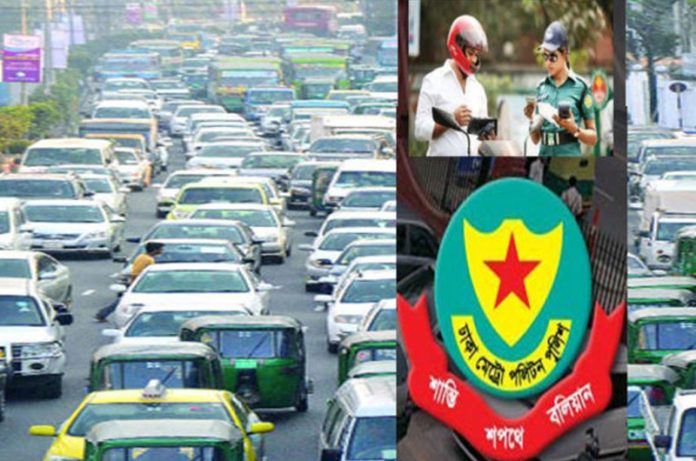 Md. Ashraful Islam: The traffic department of Dhaka Metropolitan Police conducted operations against traffic violators in different areas of the capital. The campaign is regularly conducted in the capital as part of daily activities.

According to traffic sources, action has been taken against 178 vehicles for reversing, 43 for using hydraulic horns, 4 for using hooters and beacon lights, and 12 for installing black glass in microbuses.

Besides, cases were registered against 777 motorcycles and 90 motorcycles were detained for violating traffic laws. There have been 33 video cases and 19 direct cases of using mobile phones while driving.

These cases and fines were collected by the traffic department of DMP during the day-long operation on July 7, 2016. This campaign will continue.