Headlines
Redwan Rahman graduates from FilmdomThe local government minister has instructed to cut the road if necessary to remove the waterRequest to withdraw closure shop at night till EIDThe days of the Western monolithic world are over: PutinLeaders of Germany, France, and Italy in Kyiv to express solidarity‘Presidents of two countries call and pressurized Mbappé’Two U.S. citizens are thought to be missing or taken prisoner in UkraineCOVID: The technical committee suggested lifting some restrictionsPetrol prices hit record highs in the USCanada wants a stern warning against cigarettesThe task force to protect the mountains, demanded the formation of a speedy trial tribunalDepot fire: CID tries to find the cause on CCTVRussian passports are being issued in occupied UkraineFire on Parabat Express: Railroad to Sylhet is normal after 4 hoursAnother 24 children died in Mariupol, Ukraine said
Home Country 97 million doses of covid vaccine in the country: Prime Minister
Facebook
Twitter
WhatsApp
Print 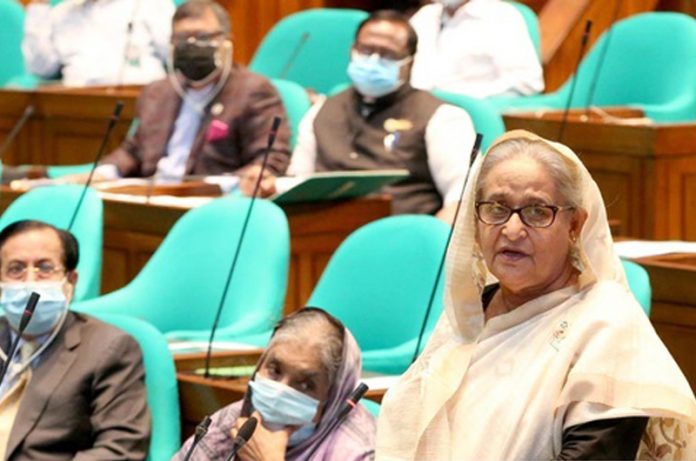 Parliament Reporter: Prime Minister Sheikh Hasina has said that the country had a stock of 96 lakh 54 thousand 119 doses of coronavirus vaccine till September 12.

The leader made the remarks in response to a question from Jatiya Party MP Rustam Ali Faraji of Pirojpur-3 constituency in Parliament on Wednesday.

The Prime Minister said, “At present, there is a plan to vaccinate all Bangladeshi citizens above 18 years of age. That is why efforts are being made to collect vaccines from different countries and organizations. ”

At present, vaccination is generally given to those aged 25 years and above. Besides, students can register for vaccination only when they are 18 years old. There is no age limit for those on the authority list.

The Prime Minister said the government is taking steps to bring 50 percent of the total population under vaccination by December this year, following the guidelines of the World Health Organization.

He said the government plans to vaccinate students aged 12 and above, register persons with disabilities through the Golden Card of the Ministry of Social Welfare, and vaccinate workers on a priority basis.

So far, eight vaccines for coronavirus have been approved for emergency use in the country. These are Oxford-AstraZeneca’s ‘Kovishield’ made at the Serum Institute of India, Russia’s ‘Sputnik-V’, China’s Sinofarm’s ‘BBIBP-CorV’, China’s Synovac’s vaccine ‘Coronavac’, a German company and US company Cominarti made by Bioentech, modern ‘SpikeVax’, Johnson & Johnson’s ‘Janssen Covid-19 vaccine’.

Also, a new vaccine was invented by the Chinese Institute of Medical Biology of the Chinese Academy of Medical Sciences (IMB Campus), which is still in the experimental stage.

Although Bangladesh has agreed to buy 30 million doses of Oxford-AstraZeneca vaccine produced at the Seram Institute of India, 6 million doses have come so far. Besides, Bangladesh is buying vaccines from Chinese synopharms.

The health minister had earlier said he would discuss buying Johnson’s vaccine in the future. Pfizer, Bioentech, Modern as well as Synoform and AstraZeneca vaccines are also coming from the international vaccine platform Covax.

In Parliament, the Prime Minister said, “All possible steps have been taken to collect the vaccine. As a result of all these activities taken by the government, arrangements have been made so far (September 12) to collect 24 crores 85 lakh 13 thousand 60 doses of vaccine.

“As of September 12, a total of 4,44,31,070 doses of vaccine have been received as bilateral purchase agreements and gifts. Vaccine collection and free immunization activities are underway to prevent corona infection. ”

Expressing hope that the target of vaccination would be met within the stipulated time, the Prime Minister said that vaccination is being provided through 63 vaccination centers in the country, and it has been extended to the unions. Necessary training has also been given for this.

“With the cooperation of all, we will be able to successfully tackle this ongoing global epidemic. The situation will return to normal. For this, besides getting vaccinated, everyone has to strictly follow the prescribed hygiene rules. ”