Headlines
Redwan Rahman graduates from FilmdomThe local government minister has instructed to cut the road if necessary to remove the waterRequest to withdraw closure shop at night till EIDThe days of the Western monolithic world are over: PutinLeaders of Germany, France, and Italy in Kyiv to express solidarity‘Presidents of two countries call and pressurized Mbappé’Two U.S. citizens are thought to be missing or taken prisoner in UkraineCOVID: The technical committee suggested lifting some restrictionsPetrol prices hit record highs in the USCanada wants a stern warning against cigarettesThe task force to protect the mountains, demanded the formation of a speedy trial tribunalDepot fire: CID tries to find the cause on CCTVRussian passports are being issued in occupied UkraineFire on Parabat Express: Railroad to Sylhet is normal after 4 hoursAnother 24 children died in Mariupol, Ukraine said
Home Headlines Abul Maal Abdul Muhith death
Facebook
Twitter
WhatsApp
Print 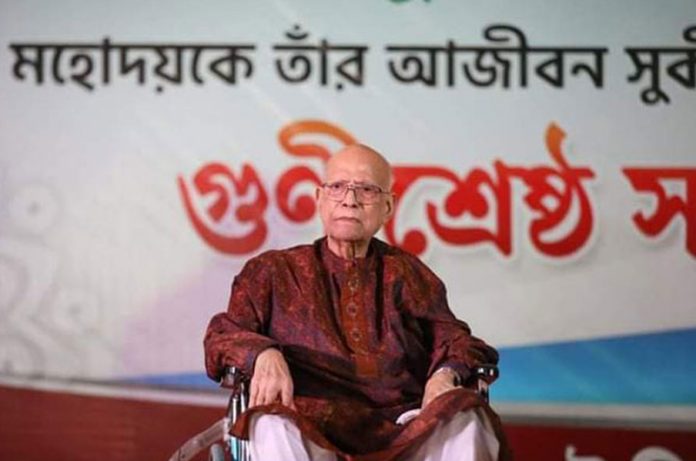 Staff Reporter: Abul Maal Abdul Muhith, the former finance minister, passed away after pulling the veil of that working life of 88 years.

Muhith died at the United Hospital in Dhaka at 12:56 pm on Friday. His younger brother quoted Foreign Minister AK Momen as saying in a message from the Foreign Ministry.

The senior member of the Awami League’s advisory council has been suffering from various physical complications since being infected with the coronavirus last year. There were various problems of old age.

Former finance minister Muhith was admitted to the hospital in the first week of March due to his physical condition. When his condition improved, he returned to his home district of Sylhet.

Accepting the award from the Sylhet City Corporation on March 16, Muhith said, “I am proud of my life.… Many may call it self-esteem. But it is not wrong. You just have to be more discriminating with the help you render toward other people. “

After the Awami League returned to power in 2009, Prime Minister Sheikh Hasina handed over the finance ministry to Muhith. He has fulfilled that responsibility for ten consecutive years.

The Prime Minister has expressed deep grief over his death. Condolences to the bereaved family members.

According to a message from the Ministry of Foreign Affairs, Muhith will have two janazas at 10:30 am on Saturday at Gulshan Azad Mosque and at 11:30 am at the South Plaza of Parliament.

Former Finance Minister Abul Maal Abdul Muhith, who has given a maximum of 12 budgets in Parliament, was the Member of Parliament for Sylhet-1 constituency. He was born on January 25, 1934.

During his student life, he was elected VP of Salimullah Hall Student Parliament. He was also active in the language movement.

Muhith joined the Pakistan Civil Service (CSP) in 1956. He was sent to the Pakistani embassy in Washington as a diplomat. In June 1971, he left Pakistan and showed allegiance to Bangladesh.

After serving as the Planning Secretary in 1972, Muhith became the Secretary in the External Resources Department of the Ministry of Finance and Planning in 1977. After retiring voluntarily in 1981, he began working as an economics and development specialist at the Ford Foundation and IFAD.

In 1982-83, Muhith became the Minister of Finance and Planning for the first time during the then HM Ershad government.

After working as a consultant in various organizations of the World Bank and the United Nations for a long time, Muhith returned to the country and became active in the politics of Awami League.

In 2009, Muhith took over the helm of the finance ministry in the Awami League’s ‘Day of Change’ government. Ten years in a row, he spent most of his time with his family in seclusion.

On March 16, Muhith, soaked in the respect of the people of his district, said, “I am a man of Sylhet. My homeland is grateful to me. There can be no greater achievement than this.”