Headlines
Redwan Rahman graduates from FilmdomThe local government minister has instructed to cut the road if necessary to remove the waterRequest to withdraw closure shop at night till EIDThe days of the Western monolithic world are over: PutinLeaders of Germany, France, and Italy in Kyiv to express solidarity‘Presidents of two countries call and pressurized Mbappé’Two U.S. citizens are thought to be missing or taken prisoner in UkraineCOVID: The technical committee suggested lifting some restrictionsPetrol prices hit record highs in the USCanada wants a stern warning against cigarettesThe task force to protect the mountains, demanded the formation of a speedy trial tribunalDepot fire: CID tries to find the cause on CCTVRussian passports are being issued in occupied UkraineFire on Parabat Express: Railroad to Sylhet is normal after 4 hoursAnother 24 children died in Mariupol, Ukraine said
Home Country After reaching Barguna, 4 launches returned to Dhaka without any passengers
Facebook
Twitter
WhatsApp
Print 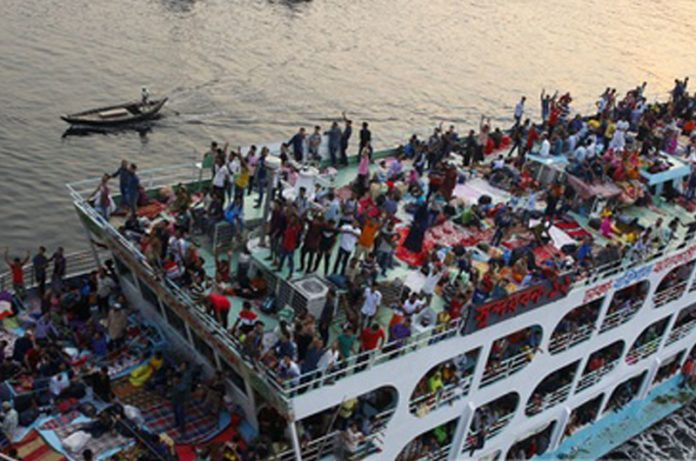 Barguna Representative: After reaching Barguna from Dhaka, the four launches returned to Dhaka without taking the passengers on the next trip.

Meanwhile, they are in extreme distress as the passengers are left behind. They had booked tickets for these launches before returning to Dhaka during the EID procession.

The launches are Dhaka-Barguna-bound NK Shipping’s MV Royal Cruise, Dhaka-Amtaligami Sundarbans-7, and Shatabdi launch. Another launch of NK Shipping has not been named.

No one has been informed as to why the passengers were dropped off at the wharf.

The cabin of Royal Cruise was booked by Zakir Hossain, a businessman from Sadar Road, Barguna.

“Our cabin was booked at the Royal Cruise launch,” he said. They left in the morning without informing us. We were supposed to go to Dhaka in an emergency. ”

Abdus Salam, a passenger from Amtali, said, “The launch left without even informing us. The booking money was not returned. ”

Shahid Mia, who is in charge of Amtali Ghat, said, “The owner will not waste more passengers due to the suffering of ten / twenty passengers; So the launch has left. ”

Siddique Mia of Barguna Launch Ghat said, “Many passengers have come to the ghat to go to Dhaka. They don’t know the launch has left. Now during Eid, how will the passengers go? ”

Regarding the issue, Barguna Deputy Commissioner Habibur Rahman said, “It was not right to leave the launch leaving the passengers like this.”

“Talking to the launch owners, I know why they left the booked passengers and left the launch.”

Commenting that the launch owners are doing these things as they wish, Mamunur Rashid, Assistant Director, Barguna Naval, said, “It is very unfair. Where extra launches have been arranged from Dhaka, why would the launch owners behave in the hope of making more profit? ”

Mamunur said a launch was scheduled to leave Barguna for Dhaka at 10 pm on Friday.

In this regard, Masum Khan, owner of MV Royal Cruise, said that BIWTA has instructed that each launch should make two trips from Dhaka. The launch had to return to Dhaka in a hurry to follow that instruction.

“We have another launch to pick up passengers from Barguna to Dhaka, which will leave for Dhaka in the evening. They were scheduled to leave Barguna at 4 pm. Now you can leave a little later in the evening at 7/8 o’clock. ”

The passengers who have booked the cabin have been informed by phone, said Masum Khan.