Headlines
Redwan Rahman graduates from FilmdomThe local government minister has instructed to cut the road if necessary to remove the waterRequest to withdraw closure shop at night till EIDThe days of the Western monolithic world are over: PutinLeaders of Germany, France, and Italy in Kyiv to express solidarity‘Presidents of two countries call and pressurized Mbappé’Two U.S. citizens are thought to be missing or taken prisoner in UkraineCOVID: The technical committee suggested lifting some restrictionsPetrol prices hit record highs in the USCanada wants a stern warning against cigarettesThe task force to protect the mountains, demanded the formation of a speedy trial tribunalDepot fire: CID tries to find the cause on CCTVRussian passports are being issued in occupied UkraineFire on Parabat Express: Railroad to Sylhet is normal after 4 hoursAnother 24 children died in Mariupol, Ukraine said
Home Headlines Allegations of ‘coup attempt’ against Trump at Capitol riots hearing
Facebook
Twitter
WhatsApp
Print 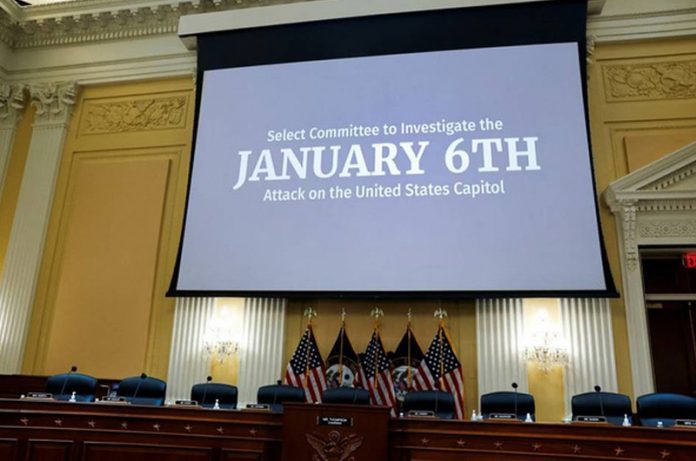 News Desk: Former United States President Donald Trump has been accused of “attempting a coup” by staging riots in the capital last year, according to a televised congressional hearing.

Liz Cheney, a Republican vice-chair of the inquiry, said Trump had “instigated” the attack. Democrat Benny Thomson commented that the Capitol riots endangered US democracy.

Proponents of her case have been working to make the actual transcript of this statement available online.

After nearly a year of investigation, the select committee of the Democrat-led U.S. House of Representatives began hearing the video on Thursday evening local time, showing video clips of testimony from some people known to be close to Trump, the BBC reported.

“We do not live in a world where the ruling administration can only stay in power based on its own views without showing specific evidence of allegations of electoral fraud,” the former attorney general said.

A recording of Trump’s daughter Ivanka’s testimony was also shown at the hearing. Ivanka has been shown to “accept” the way Bar rejected Trump’s “conspiracy theories.”

There are supposed to be 6 such hearings this month, including Thursday. These hearings will be broadcast live on television.

Trump has already called the hearing a “political hoax.” The former US president, who has been widely accused of rigging the election by Biden, has not yet made an official announcement but has indicated he will run in the 2024 presidential election.

“January 7 was the culmination of a coup attempt, a ruthless attempt,” Mississippi lawmaker Thomson, chairman of the congressional committee, told the hearing. One wrote in January that it was an attempt to overthrow the government. That violence was not accidental, it was Trump’s last attempt. “

“Those who stormed our capital, fighting for hours with law enforcement, rigged the election and were inspired by the words of a just president, Trump,” said Republican Cheney. President Trump summoned them, mobilized them, and ignited the flames of attack. “

Republicans have denied the allegations in a statement issued Friday, stating “Similar, baseless allegations concerning Russia’s intelligence have been made more than once.

Opinion polls suggest Democrats could lose control of the House of Representatives and Senate in mid-November.

Voters’ confidence in Democrat Biden is lower than it was at the same time of their term as Trump, due to skyrocketing inflation, rising fuel prices, and the baby food crisis.

Republican House of Representatives leader Kevin McCarthy criticized Trump after the Capitol riots, but later changed his tune. He sees the Jan. 8 congressional inquiry committee as a “smokescreen” created by Democrats to change voting laws.

The democrat-majority House of Representatives impeached Trump a week before the end of his term in office, although he was acquitted in the Senate.