Headlines
Redwan Rahman graduates from FilmdomThe local government minister has instructed to cut the road if necessary to remove the waterRequest to withdraw closure shop at night till EIDThe days of the Western monolithic world are over: PutinLeaders of Germany, France, and Italy in Kyiv to express solidarity‘Presidents of two countries call and pressurized Mbappé’Two U.S. citizens are thought to be missing or taken prisoner in UkraineCOVID: The technical committee suggested lifting some restrictionsPetrol prices hit record highs in the USCanada wants a stern warning against cigarettesThe task force to protect the mountains, demanded the formation of a speedy trial tribunalDepot fire: CID tries to find the cause on CCTVRussian passports are being issued in occupied UkraineFire on Parabat Express: Railroad to Sylhet is normal after 4 hoursAnother 24 children died in Mariupol, Ukraine said
Home Entertainment Angelina Jolie opened her mouth about the rapist producer
Facebook
Twitter
WhatsApp
Print 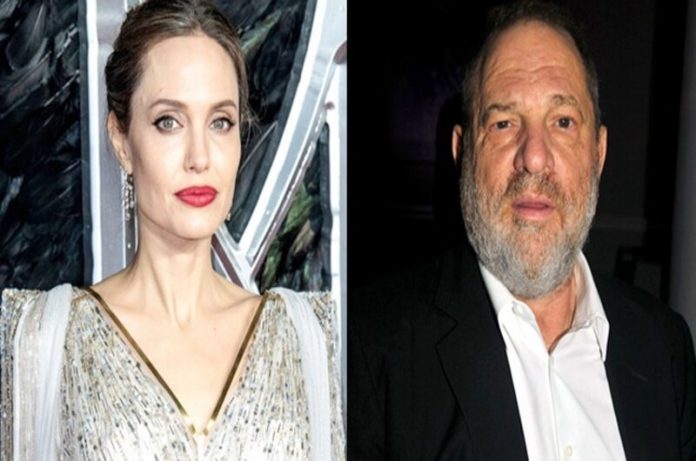 Entertainment Desk: In Hollywood, Harvey Weinstein is hailed as a talented director, producer, and actor. However, he is currently criticized as a rapist. One of the founders of Miramax Films has also been accused of sexually harassing a number of actresses in her long career.

Hollywood actress Angelina Jolie has opened her mouth about the bitter experience of working with him. He said he did not want to work with Weinstein. That’s why he turned down an offer to play a character in Martin Scorsese’s The Aviator in his production.

In an interview with The Guardian, the actress shared her experience during the shooting of Weinstein’s Playing by Heart in 1998. When she was only 26 years old an actress. “Weinstein tried to attack me several times during that time,” Jolie said. Tried to rape me. I was not safe anywhere outside the house during the shooting. I was worried about his attack.

I saw that he was greedy towards everyone. I stayed away from him. I warned people about it. I remember Johnny (Johnny Lee Miller) being my first husband, he told others he would never let a girl go to Weinstein alone. ‘

Although Weinstein has denied all of Jolie’s allegations.

Jolie further alleged in the interview that against her will her ex-husband Pete went to Weinstein to produce the 2012 film ‘Killing Them Softly’. Which disappointed Jolie. “We had a fight over that,” he said. I was in a lot of trouble. ‘

By the way, Jolie’s divorce from Pete was finalized in 2019. A legal battle over the rights of their six children is still ongoing.