Headlines
Redwan Rahman graduates from FilmdomThe local government minister has instructed to cut the road if necessary to remove the waterRequest to withdraw closure shop at night till EIDThe days of the Western monolithic world are over: PutinLeaders of Germany, France, and Italy in Kyiv to express solidarity‘Presidents of two countries call and pressurized Mbappé’Two U.S. citizens are thought to be missing or taken prisoner in UkraineCOVID: The technical committee suggested lifting some restrictionsPetrol prices hit record highs in the USCanada wants a stern warning against cigarettesThe task force to protect the mountains, demanded the formation of a speedy trial tribunalDepot fire: CID tries to find the cause on CCTVRussian passports are being issued in occupied UkraineFire on Parabat Express: Railroad to Sylhet is normal after 4 hoursAnother 24 children died in Mariupol, Ukraine said
Home Sports Appeal rejected, Brazil-Argentina has to play
Facebook
Twitter
WhatsApp
Print 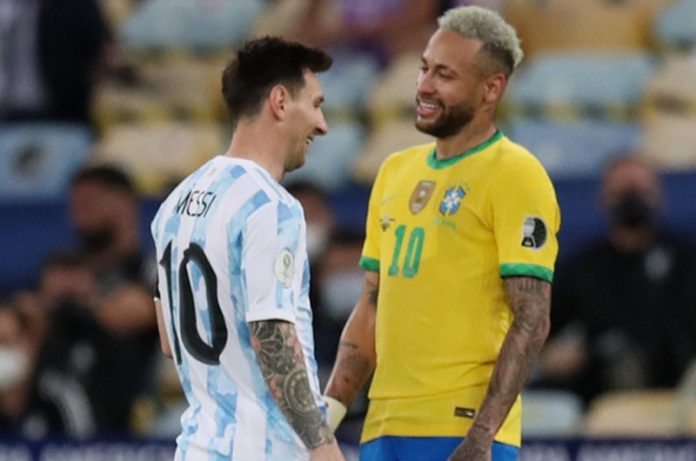 Sports Desk: No action was taken by the FIFA Appeals Committee. The application of the Football Association of Brazil and Argentina has been rejected. These two arch-rivals of Latin America have to play the postponed World Cup qualifiers.

The World Cup’s governing body said in a statement on Monday that the two countries’ objections had been rejected by the appeal’s committee. The two parties have upheld a fine of 50,000 Swiss francs.

On September 5, the battle between the two eternal rivals started at the scheduled time. But five minutes later, the match was finally called off due to the intervention of the Brazilian health department.

Earlier, it was reported in the media that four Argentine players had broken quarantine rules. An hour before the start of the match, several media outlets, including Reuters, reported that the four had been asked by the local health department to stay in isolation at the hotel.

However, the team’s XI includes three of them – Aston Villa goalkeeper Emiliano Martinez, Tottenham Hotspur defender Christian Romero and midfielder Giovanni Lo Celso. Entering the field in the fifth minute of the match, local health officials complained that the visitors had gone to the dressing room.

In February, Martinez, Romero, Lo Celso, and Emiliano Buendিয়াa were banned for two matches by the world’s top football body. The company then decided to re-organize the match.

The only thing left is the postponed match, which is scheduled to take place on September 22. It’s just a match of rules. The South American qualifiers have already ended. Brazil (45) and Argentina (39) from the top two confirmed Qatar to play in the World Cup. In the meantime, he knows the names of the group stage rivals.

Serbia, Switzerland, and Cameroon are with Brazil in Group G of the World Cup draw on April 1.