Headlines
Redwan Rahman graduates from FilmdomThe local government minister has instructed to cut the road if necessary to remove the waterRequest to withdraw closure shop at night till EIDThe days of the Western monolithic world are over: PutinLeaders of Germany, France, and Italy in Kyiv to express solidarity‘Presidents of two countries call and pressurized Mbappé’Two U.S. citizens are thought to be missing or taken prisoner in UkraineCOVID: The technical committee suggested lifting some restrictionsPetrol prices hit record highs in the USCanada wants a stern warning against cigarettesThe task force to protect the mountains, demanded the formation of a speedy trial tribunalDepot fire: CID tries to find the cause on CCTVRussian passports are being issued in occupied UkraineFire on Parabat Express: Railroad to Sylhet is normal after 4 hoursAnother 24 children died in Mariupol, Ukraine said
Home More Metropolitan Arrangements if a septic tank is not made within six months: Mayor...
Facebook
Twitter
WhatsApp
Print 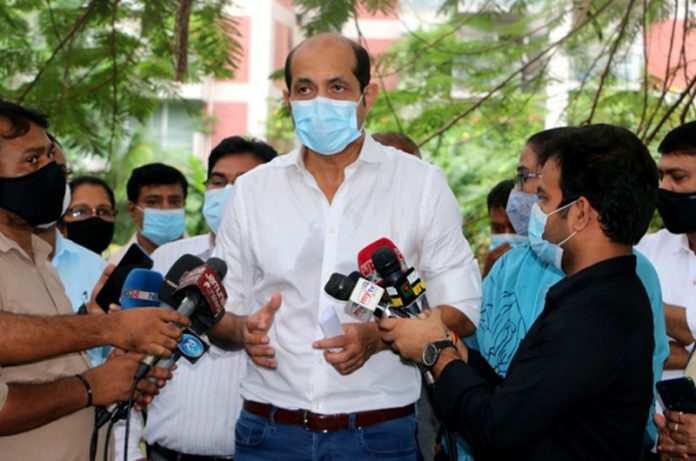 Senior Reporter: The buildings in the elite areas of the capital that do not have septic tanks, if not built within the next six months, legal action will be taken, warned the mayor of Dhaka North City Corporation. Atiqul Islam.

He said this while inspecting sewage disposal activities in Gulshan and Banani areas of the capital on Tuesday.

Atiqul Islam told reporters that he visited 21 buildings and did not find septic tanks in any of the houses.

“Most of the buildings in elite areas like Gulshan, Banani and Baridhara do not have effective septic tanks and soak wells. As a result, untreated sewage falls directly into drains or canals, polluting the environment. ”

Atiqul Islam said modern septic tanks and soak wells should be installed in the houses and a purification systems should be kept in operation.

“These works have to be completed within the next six months. Then we will go out on expeditions. If a septic tank is not found in any house, necessary action will be taken according to the existing law. ”

Dhaka North City Corporation had earlier issued a notice in January this year giving time till March 31 to install septic tanks and sock wells as per government rules.

It was said that the sewerage lines of many houses and establishments have been directly connected to various stormwater drains, canals, lakes, and reservoirs of the DNCC without following the rules, which is a punishable offense under the Local Government Act 2009.

According to a research report by the Bangladesh Institute of Planners (BIP) in 2019, 1.5 million cubic meters of sewage is generated in Dhaka every day, of which 20 percent remains at the source. And only 40,000 cubic meters goes to the mad sewage treatment plant. The remaining 11 lakh 70 thousand cubic meters of waste is discharged untreated and going to the river.

If the river pollution is not stopped in this way, it will not be possible for WASA to supply clean and safe water to Dhaka even after spending crores of rupees, the report said.