Headlines
Redwan Rahman graduates from FilmdomThe local government minister has instructed to cut the road if necessary to remove the waterRequest to withdraw closure shop at night till EIDThe days of the Western monolithic world are over: PutinLeaders of Germany, France, and Italy in Kyiv to express solidarity‘Presidents of two countries call and pressurized Mbappé’Two U.S. citizens are thought to be missing or taken prisoner in UkraineCOVID: The technical committee suggested lifting some restrictionsPetrol prices hit record highs in the USCanada wants a stern warning against cigarettesThe task force to protect the mountains, demanded the formation of a speedy trial tribunalDepot fire: CID tries to find the cause on CCTVRussian passports are being issued in occupied UkraineFire on Parabat Express: Railroad to Sylhet is normal after 4 hoursAnother 24 children died in Mariupol, Ukraine said
Home Sports Ashraful’s career best unbeaten 141
Facebook
Twitter
WhatsApp
Print 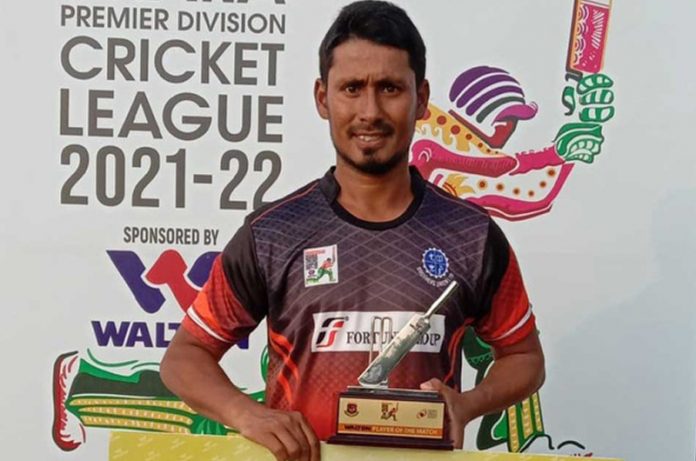 Sports Reporter: A very slow fifty in one match, 24 with two zeros in the remaining 5 matches. This was the performance of Mohammad Ashraful in this year’s Dhaka Premier League. There was no rhythm in the bat. The experienced batsman was able to break the cycle of failure and finally paint himself in the light of success. After five consecutive defeats in the best innings of the captain’s career, Brothers Union got their first taste of victory in the league.

This year will mark the 22nd anniversary of Ashraful’s List ‘A’ career. This fall, he surpassed his previous best innings. Brothers Union defeated Rupganj Tigers Cricket Club by 36 runs.

In BKSP, Brothers scored 309 runs on Tuesday and held Rupganj to 263 runs.

His previous best in List A cricket was 127 against Mohammedan Sporting Club in 2016 for the Kalabagan Sports Club.

Ashraful’s start was quite slow even on this day. After losing the toss, Brothers lost to opener Imtiaz Hossain (0) in the first over. Ashraful and Maishukur Rahman, who came down in three, then chose the path of careful batting. There were 16 runs in 6 overs.

Ashraful then hit two fours in Farhad Razor’s over. Maishukur hit sixes in two consecutive overs to Nasum Ahmed and Farhad Reza. After that, the two decided to form a pair with careful batting again.

At the end of 25 overs of the innings, Myshukur had just completed fifty, Ashraful was still a little away from fifty!

Maishukur made fifty off 6 balls, Ashraful made 6 balls.

Ashraful opened his hand after fifty. Sharifullah hit fours and sixes in one over. The speed of the run continues to increase. He needs only 32 balls to go from fifty to a century. List ‘A’ gets the eleventh century of his career with 110 balls.

Myshukur, however, went back before that. A pair of 150 runs for the second wicket stopped his farewell with 8 off 92 balls.

Minhazul Abedin Sabbir was dismissed for 30 off 36 balls. The Brothers’ potential score at the time seemed to be 270-280. That is more than three hundred in the stormy batting of Chaturanga de Silva.

The Sri Lankan all-rounder played an innings of 51 off 25 balls, with 4 fours and 3 sixes. Brothers made 65 runs in the last 6 overs. Ashraful was not out in the end.

Rupganj Tigers had the strength to chase this run on the batting wicket. But they did not get big innings in the top order. After opener Mizanur Rahman was dismissed for 1 run, Zakir Hossain and Baba Aparajith put on a pair of 50 runs. But the two batsmen who were in great form got out and settled down.

The two batting heroes of the Brothers returned the ball to these two. In the left-arm spin of Chaturanga, Zakir was dismissed for 33 runs with a lazy shot from outside the ball. Ashraful came to attack and got success in the first ball. Indian Oprahith (34) made a return catch in a loose drive on a flighted delivery.

However, Rupganj overcame that push in the next pair. Fazle Mahmood and Marshall Ayub, two experienced batsmen in domestic cricket, led the team with great batting. After meeting the demands of the situation, the two kept the team on their way.

Fazle Mahmud put his foot in the fifty with 57 balls, Marshall with 51 balls. The two continue to run per ball without taking much of a risk.

Saqlain Sajib broke the tie by returning Marshall who scored 56 off 54 balls. Marshall’s foot went out in the follow-through to play the left-arm spinner inside out. The keeper broke the stump in the chuck.

After that, Rupganj could not fight anymore. Farhad Reza, Ariful Haque, Sharifullah, none of them could survive.

Fazle Mahmud tried from one end. List ‘A’ scored the eighth century of his career in 99 balls, with four fours and sixes. However, the next ball was out. In the end, Nasum Ahmed made 22 runs from 13 balls to reduce the gap.

Man of the Match: Mohammad Ashraful