Headlines
Redwan Rahman graduates from FilmdomThe local government minister has instructed to cut the road if necessary to remove the waterRequest to withdraw closure shop at night till EIDThe days of the Western monolithic world are over: PutinLeaders of Germany, France, and Italy in Kyiv to express solidarity‘Presidents of two countries call and pressurized Mbappé’Two U.S. citizens are thought to be missing or taken prisoner in UkraineCOVID: The technical committee suggested lifting some restrictionsPetrol prices hit record highs in the USCanada wants a stern warning against cigarettesThe task force to protect the mountains, demanded the formation of a speedy trial tribunalDepot fire: CID tries to find the cause on CCTVRussian passports are being issued in occupied UkraineFire on Parabat Express: Railroad to Sylhet is normal after 4 hoursAnother 24 children died in Mariupol, Ukraine said
Home Headlines At least 50 people have been killed in a gun attack on...
Facebook
Twitter
WhatsApp
Print 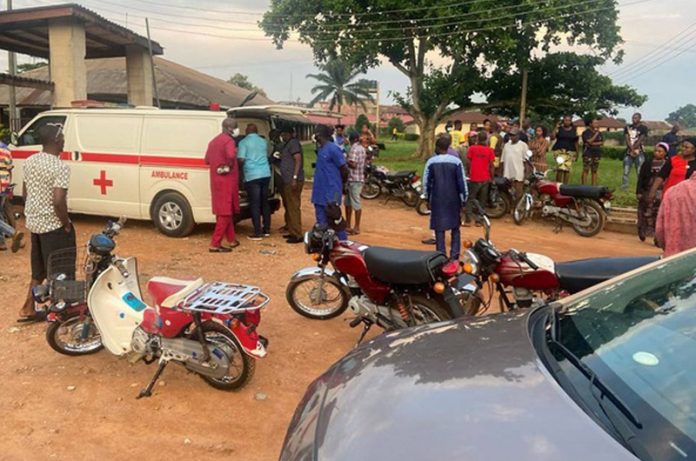 International Desk: At least 50 people have been killed in a gun attack during Sunday prayers at a church in southwestern Nigeria.

The dead included children and women, according to hospital doctors and media reports.

He did not say how many people were killed or injured in the attack on St. Francis Catholic Church in the state of Owoo. Simply put, the police are investigating the incident.

Ondo state governor Arakunrin Oluwarotimi Akeredolu described Sunday’s incident as “genocide.” He went to the hospital to see the injured after inspecting the scene. He commented that such incidents could not be allowed to happen again.

The identity of the attackers and the motive for the attack were not immediately clear, Reuters news agency reported.

A spokesman for Nigeria’s Catholic Church, Reverend Augustine Aiku, has expressed “deep sorrow” over the attack, which was carried out by unknown assailants. He said the church’s bipas and other priests had escaped the attack

A doctor at a hospital in Ouaru told Reuters that at least 50 bodies had been brought to two hospitals in the city from the site of the attack. The doctor, who did not want to be named, said blood was needed to treat the injured.

Nigerian President Muhammadu Buhari has called it a “heinous attack” and condemned it. The Vatican says Pope Francis has prayed for the victims.

Islamist rebels in northeastern Nigeria are battling government forces, and in the northwest, armed criminal groups often carry out deadly attacks for looting and kidnappings for ransom. But such deadly attacks are rare in the southwestern part of the country.