Headlines
Redwan Rahman graduates from FilmdomThe local government minister has instructed to cut the road if necessary to remove the waterRequest to withdraw closure shop at night till EIDThe days of the Western monolithic world are over: PutinLeaders of Germany, France, and Italy in Kyiv to express solidarity‘Presidents of two countries call and pressurized Mbappé’Two U.S. citizens are thought to be missing or taken prisoner in UkraineCOVID: The technical committee suggested lifting some restrictionsPetrol prices hit record highs in the USCanada wants a stern warning against cigarettesThe task force to protect the mountains, demanded the formation of a speedy trial tribunalDepot fire: CID tries to find the cause on CCTVRussian passports are being issued in occupied UkraineFire on Parabat Express: Railroad to Sylhet is normal after 4 hoursAnother 24 children died in Mariupol, Ukraine said
Home More Environment Australia’s new leader hints at a change in climate policy
Facebook
Twitter
WhatsApp
Print 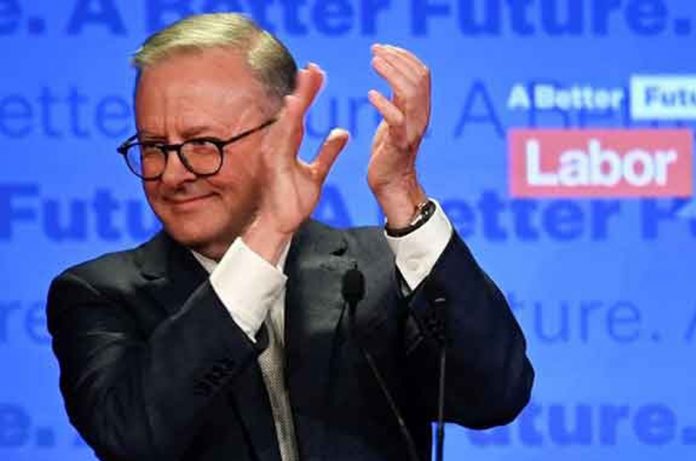 International Desk: The Labor Party is returning to power in Australia after nine long years. In the meantime, Anthony Albanese, the new prime minister, has signaled a change in policy and strategy to govern the country, especially in climate policy.

He says Australia could become a superpower using renewable energy.

According to the BBC, Alabanis will be sworn in as the new prime minister on Monday. However, it is unknown at this time what he will do after leaving the post.

Australia has broken all previous records of wildfires and flash floods in the last three years. As a result, the climate has become a major concern for voters in this election.

In his election manifesto, Albanese pledged to do more to tackle climate change.

Voting in Australia’s national election took place on Saturday. In order to form a government out of 151 seats in the parliament of the country, at least 6 seats have to be obtained.

It is unknown at this time what he will do after leaving the post. The party has already won 72 seats. I want four more seats.

Meanwhile, the counting of votes is still going on and will continue for the next several days. Because the election officials have just started counting about 3 million votes that were called.

If the Labor Party does not get a single majority and if Australia gets a hanging parliament, then the smaller party The Green’s MPs, and independently elected MPs will have a greater impact on the new government’s climate policy.

The Green Party and all independents have campaigned for a radical change in Australia’s climate change policy.

“We now have a chance to end the climate war in Australia,” Albaniz told the BBC shortly after winning the election.

“Australian businesses also know that good action to tackle climate change will bring good things for both our jobs and our economy.” And I want to join the global effort to combat climate change. “

However, despite making so many promises about climate change, Albanian has not been able to prove their point. According to the BBC, so far he has rejected calls for a complete ban on coal use or a ban on new coal mines.