Headlines
Redwan Rahman graduates from FilmdomThe local government minister has instructed to cut the road if necessary to remove the waterRequest to withdraw closure shop at night till EIDThe days of the Western monolithic world are over: PutinLeaders of Germany, France, and Italy in Kyiv to express solidarity‘Presidents of two countries call and pressurized Mbappé’Two U.S. citizens are thought to be missing or taken prisoner in UkraineCOVID: The technical committee suggested lifting some restrictionsPetrol prices hit record highs in the USCanada wants a stern warning against cigarettesThe task force to protect the mountains, demanded the formation of a speedy trial tribunalDepot fire: CID tries to find the cause on CCTVRussian passports are being issued in occupied UkraineFire on Parabat Express: Railroad to Sylhet is normal after 4 hoursAnother 24 children died in Mariupol, Ukraine said
Home More Health Bangladesh has received the most vaccines from Covax: UNICEF
Facebook
Twitter
WhatsApp
Print 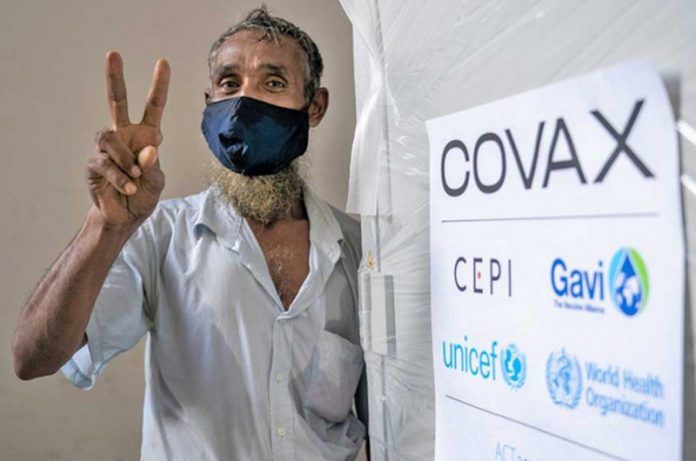 News Desk: The United Nations Children’s Fund (UNICEF) has provided more than 19 crore Covid vaccines to Bangladesh in one year under Covax.

In a press release issued on Tuesday on the occasion of the anniversary of the delivery of UNICEF vaccines to Bangladesh, the UN agency said that Bangladesh has so far received the most vaccines under CoVAX.

UNICEF is also cooperating by providing a vaccine booster dose of covid vaccine in June.

Kovacs is a global initiative to provide vaccines to countries on a fair basis, led by the Epidemic Preparedness Innovation, Vaccine Alliance (GAVI), and the World Health Organization (WHO). Under this, UNICEF is working to deliver the vaccine to the country.

According to the press release, more than 62% of the coronavirus vaccines that Bangladesh has received so far have come through CoVAX.

In February 2021, the year after the onset of the epidemic, covid vaccination was started in Bangladesh. The first vaccine was sent to Bangladesh under UNICEF Covax on June 1 of that year. From February to June, only 4 percent of the country’s population was covered by the two-dose vaccine.

UNICEF says that one year after the start of vaccination in Bangladesh, through the concerted efforts of the government, the World Health Organization, and other partners, 117 million people have received two doses of the Covid vaccine, which is 69 percent of the country’s total population.

Additional Director General of the Department of Health, Ministry of Health and Family Welfare. “Thanks to the uninterrupted availability of vaccines and the hard work of health workers, we have been able to reach people across the country without wasting the vaccine,” said Mirzadi Sebrina Flora.

UNICEF said in a press release that it would strengthen the cold chain and ultra cold chain system in vaccine protection, deliver vaccines, assist in data management and assist the government in enhancing vaccination capacity.

Sheldon Yate, UNICEF Representative in Bangladesh, said that “the political commitment and equitable supply of vaccines can be achieved.”

He praised Bangladesh’s immunization program, saying that the way people in all parts of the country have been vaccinated quickly and safely is “nothing less than impossible”.

Bardan Jang thinks that this ‘success’ would not have been possible without the help of Covax. He said the ongoing pace of vaccination raises hopes of seeing an end to the epidemic.

However, the representative of the World Health Organization in Bangladesh advised, keeping in mind that the ‘epidemic’ cannot be said to be over until the infection is brought under control everywhere.