Headlines
Redwan Rahman graduates from FilmdomThe local government minister has instructed to cut the road if necessary to remove the waterRequest to withdraw closure shop at night till EIDThe days of the Western monolithic world are over: PutinLeaders of Germany, France, and Italy in Kyiv to express solidarity‘Presidents of two countries call and pressurized Mbappé’Two U.S. citizens are thought to be missing or taken prisoner in UkraineCOVID: The technical committee suggested lifting some restrictionsPetrol prices hit record highs in the USCanada wants a stern warning against cigarettesThe task force to protect the mountains, demanded the formation of a speedy trial tribunalDepot fire: CID tries to find the cause on CCTVRussian passports are being issued in occupied UkraineFire on Parabat Express: Railroad to Sylhet is normal after 4 hoursAnother 24 children died in Mariupol, Ukraine said
Home Sports Bangladesh is ahead by winning the battle
Facebook
Twitter
WhatsApp
Print 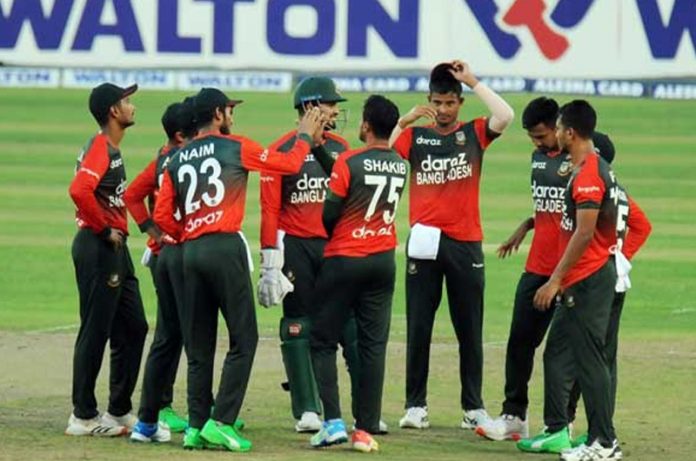 Sports Desk: 2 balls need 13 runs. The match is in the hands of Bangladesh. Then Mustafizur Rahman sat down and said ‘no ball’, Tom Latham sent it to the boundary. Sudden tension in the match, 6 runs from 2 balls is very possible! In the end, however, Latham could not. Despite playing a great innings, the New Zealand captain stopped short of approaching the desired address. Overcoming fears, Bangladesh got the relief of another victory.

Bangladesh beat New Zealand by 4 runs in the second T20 to take a 2-0 lead in the five-match series.

Latham chased down Bangladesh’s 141 runs at the Sher-e-Bangla Stadium in Mirpur to keep New Zealand at bay till the last ball. He did not lose, but his team lost for a short time due to a lack of a qualified partner. The Kiwi captain remained unbeaten on 6 fours and 1 six with 75 off 49 balls.

He may have given away the best personal innings so far, combining two matches in last month’s Australia series and the current series. But the Kiwi captain could not bring a great victory to the team without finding a partner.

The score of around 140 runs of both teams shows that the wicket was relatively good for batting on this day. Considering the recent picture of this field, this wicket can be called a batting paradise.

Top order runs were needed after winning the toss. Liton Das and Mohammad Naeem Sheikh brought that desired start to Bangladesh. Liton, however, survived with zero runs. Colin D’Grandhome made an easy catch in the square leg off Cole McKinnie.

Litton is the one who suffers the most in New Zealand. Ejaz Patel hit two boundaries. He continued to work to increase the run. Go with Naeem.
Fifty touched the team’s run in the ninth over. This is Bangladesh’s first fifty in the opening match in 9 matches. In the next over, Liton hit Rachin Rabindra in the slog sweep. This is the first six of the series between the two teams.

The pair broke in that over. Not just one, Rabindra brought wickets to New Zealand with two balls in a row. Lytton strangely pulled the ball to the stumps as he turned to play the ball on the side. His innings stopped at 33 off 29 balls.

Mushfiqur Rahim may have been dropped to three due to the right-left combination. Defeated at the turn, he says stumped first. This is his sixth zero in T20, all four of which are ‘Golden Ducks’.

Shakib Al Hasan started down four very positively. With great use of the feet, McKinney hit the boundary straight to the bat. Send the short ball to the boundary with extra cover. But after showing the spark of possibility, the next one goes out. Long off was caught by lifting. After a great start, the team’s innings came to a halt.

Mahmudullah got down and started the team again with some great shots. However, Naeem, who survived at one end, could not meet the demand of the situation later in the innings. He was dismissed for 39 off 39 balls in 16 overs.

Afif Hossain also got out trying to score a quick run. Bangladesh can still release 140 courtesy of Mahmudullah. The captain remained unbeaten on 36 off 32 balls in 5 overs. Nurul Hasan Sohan made 13 runs off 9 balls at the end.

The run chase in New Zealand was entirely the story of Latham’s batting. Their two openers failed again. Bold Rachin Rabindra bowled short after a great six off Shakib. Stumped Tom Blandell is the arm of Sheikh Mehdi Hasan who has a great ball again with a new ball.

Latham led the team down to three. Will Young accompanied him for a long time in the third wicket. When the pair became a threat to Bangladesh, Shakib returned Young for 22 runs.

Then Colin D. Grandhome, Henry Nichols failed to meet the demands of the situation. But Latham kept the match alive with his display of great skill and temperament. He touched fifty off 36 balls, his first in 15 Twenty20s.

Towards the end, Cole McKinney accompanied the captain from one end. But he could not make a quick run. Latham could not cross the last hurdle, even though he could get closer by his own efforts.

The third match of the series is on Sunday.

Man of the match: Mahmudullah.