Headlines
Redwan Rahman graduates from FilmdomThe local government minister has instructed to cut the road if necessary to remove the waterRequest to withdraw closure shop at night till EIDThe days of the Western monolithic world are over: PutinLeaders of Germany, France, and Italy in Kyiv to express solidarity‘Presidents of two countries call and pressurized Mbappé’Two U.S. citizens are thought to be missing or taken prisoner in UkraineCOVID: The technical committee suggested lifting some restrictionsPetrol prices hit record highs in the USCanada wants a stern warning against cigarettesThe task force to protect the mountains, demanded the formation of a speedy trial tribunalDepot fire: CID tries to find the cause on CCTVRussian passports are being issued in occupied UkraineFire on Parabat Express: Railroad to Sylhet is normal after 4 hoursAnother 24 children died in Mariupol, Ukraine said
Home Country Bangladeshis detained in Libya must be returned: Foreign Minister
Facebook
Twitter
WhatsApp
Print 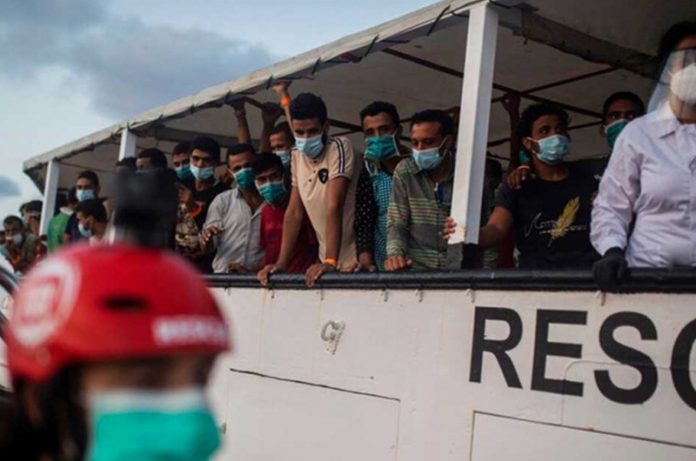 Md. Ashraful Islam: Foreign Minister AK Abdul Momen has said that many Bangladeshis detained in Libya will be repatriated to Europe.

Libyan police have detained more than 500 Bangladeshis in the past few days off the Mediterranean coast, according to Voice of America.

Responding to a question from reporters at the Foreign Ministry on Tuesday, the foreign minister said measures would be taken to bring them back.

Referring to talks with a representative of the International Organization for Migration (IOM), Abdul Momen said, “Many of those who have been repatriated go there again.”

“It simply came to our notice then. A little reduced, of course. I think you create awareness. What a pain to go abroad! I heard yesterday that there are still enough people detained. ”

Explaining the current situation in Libya, Foreign Minister Momen said that the government had stopped Bangladeshis from going to Libya in 2015 due to instability. It was re-introduced as a ‘fairly normal’ situation prevailed. Skilled manpower like engineers and technicians are going there at high salaries.

“Even then, there is instability in the country,” he said. There are warlords in some areas. Those who go illegally fall into the clutches of Oisbe.

“We have already brought some people. I heard that hundreds more people were detained there. He is in jail. It’s very sad. “

Bangladesh’s ambassador to Libya, Maj. Gen. SM Shamim Uz Zaman, was quoted by the Voice of America’s Bangla division as saying in a report that they were detained on April 23 off the east coast of Tripoli while preparing to cross into Europe.

“Initially, the Libyan police told us they had detained 500 Bangladeshis,” the ambassador said. However, we have so far been able to contact 240 people. ”

“They will be repatriated. Our ambassador will seek the cooperation of all concerned, including the IOM, to bring them back. Within a year, we have brought back more than a thousand from Libya. “

Masood bin Momen said, “Concern numbers for Europe trips across the Mediterranean coast are not decreasing. We will take it seriously. We’re going to take the Awareness Campaign seriously.

“People from the districts are going more, especially to the people of Faridpur, Madaripur, and Shariatpur areas.”

“We want to focus on trafficking here,” he said. They have to identify those involved in these activities.

“Our labor market in Libya is slowly opening up. It’s a struggle for those who go the legal way in the normal market. “