Headlines
Redwan Rahman graduates from FilmdomThe local government minister has instructed to cut the road if necessary to remove the waterRequest to withdraw closure shop at night till EIDThe days of the Western monolithic world are over: PutinLeaders of Germany, France, and Italy in Kyiv to express solidarity‘Presidents of two countries call and pressurized Mbappé’Two U.S. citizens are thought to be missing or taken prisoner in UkraineCOVID: The technical committee suggested lifting some restrictionsPetrol prices hit record highs in the USCanada wants a stern warning against cigarettesThe task force to protect the mountains, demanded the formation of a speedy trial tribunalDepot fire: CID tries to find the cause on CCTVRussian passports are being issued in occupied UkraineFire on Parabat Express: Railroad to Sylhet is normal after 4 hoursAnother 24 children died in Mariupol, Ukraine said
Home Sports Bangladesh’s ‘Circle Breaking’ World Cup started with the Scottish Challenge
Facebook
Twitter
WhatsApp
Print 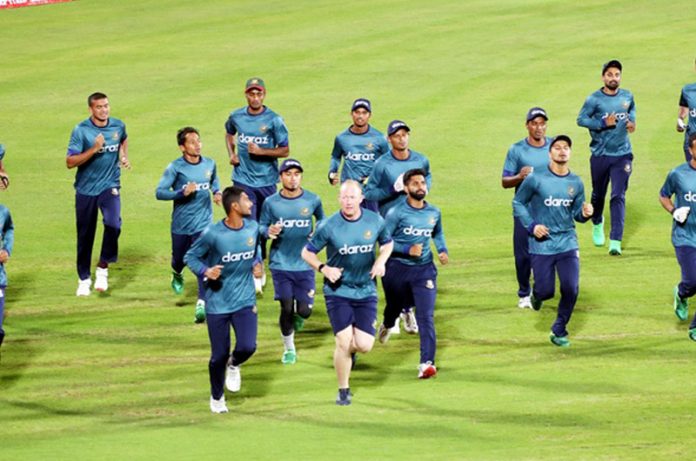 Sports Desk: Mahmudullah entered the press conference room with a smile on his face. The next time there was a burst of laughter. Sometimes smiling, sometimes wide. Not all questions were meant to provide food for laughter. There was a bouncer-yorker as well as a ‘half volley’ of words. But the Bangladesh captain took care of everything in a cheerful mood. He sang the song of breaking the shackles in this World Cup with conviction in his voice.

After the first World Cup in 2006, Bangladesh could not win any match in the main stage of the World Twenty20. The team wants to break the circle of failure and come out this time. That campaign is starting on Sunday. Bangladesh will face Scotland at the Oman Cricket Academy. The match started at 8 pm Bangladesh time.

Each time the first round is called a qualifying round, the team and those who have not won a match in the last 14 years in the main event may have high hopes. Especially, when the picture of preparation before the World Cup is gray.

The team that won the series against Australia and New Zealand at home has been knocked out in the warm-up match before the World Cup. Sri Lanka and Ireland have lost two official warm-up matches.

However, Bangladesh did not get the whole team in those matches. The captain himself did not play due to back discomfort, Shakib Al Hasan was in the IPL. Mustafizur Rahman played in only one. Reminding this, Mahmudullah said in the press conference on the day before the match, the team is not at all upset about the rate of the preparation match.

“We lost two warm-up matches, but I don’t think it will have any effect. We are ready for tomorrow’s match. The team’s confidence is the same as before. Hopefully, we can play our best cricket.

Mahmudullah wants to go a long way in that raft of positivity. The captain wants to surpass himself in the first match, the first round and the main round.

“We are just thinking about the first round. If I can play good cricket in this round and win all the matches and go to the next round, I will think more. I said one thing, we have to go through several steps. There are some obstacles, which we want to break. I want to win as many matches as possible. We have these things in our heads and we want to move forward step by step. ”

The other two teams in this group are Oman and Papua New Guinea. In general, there is no reason not to become the champion of Bangladesh in the group stage. However, cricket, especially T20 cricket, no longer adheres to the general equation. Bangladesh got proof of that against Scotland 9 years ago. The two teams have met only once in 20-over cricket. In that match in 2012, Bangladesh could not get in front of the Scots.

There are many of the teams that won that match in the Scotland team again. Now they are more mature and experienced. Several more effective cricketers have been added to the team. They are a dangerous team in T20. Some of them have cricketers to win matches. Ritchie Barrington, Kyle Quetzer, George Manzi, Callum McLeod’s batting is strong enough. Their bowling depth is also a lot. Fielding is always great.

Their preparation has been great. They have been practicing in Oman and the UAE for over a month now. They won the ODI series 3-0 against Oman at the World Cup this month. They have all won four warm-up matches in the UAE. Coach Shane Berger has threatened before the start of the event that he will not put Bangladesh above Oman-Papua New Guinea in the group stage.

At the press conference on the eve of the match, senior cricketer Callum McLeod’s voice was not as loud as the coach’s. However, his self-confidence has come outright.

“Bangladesh’s recent form is very good. Combining a lot of games in the rankings and such tournaments, they will probably be a bit of a favorite. But we know and have shown over the last few years that if we play well, we can fight full member countries. Tomorrow we will come down in that hope. If Bangladesh plays well, we have to play a little better, that’s all. ”

The day before the wicket match was also full of green grass. However, a lot should be cut before the match. In that case, the support of the batsmen at 22 yards is more. But batting is the biggest concern of Bangladesh.

Liton Das and Mohammad Naeem Sheikh are not in top form. The majestic government has signaled a return to rhythm in the two warm-up matches. However, he could not play big innings. Mushfiqur Rahim is looking for himself lost. Shakib Al Hasan finished the IPL with two wickets in a row.

Even then, the team has to look at them. The captain also expressed confidence in the press conference. The team’s bowling attack is good enough and varied. However, there is a question of whether the fatigue of playing in the IPL will affect the bowling of Mustafizur Rahman and Shakib. Both of them have to take the main responsibility in bowling.

The whole team has to bear the burden of expectation. In this country of cricket frenzy, the mercury of hope is high in every series tournament. In the World Cup, it is even higher. If they want to touch it, they have to leave it on the field. As Mahmudullah said, some barrier walls must be leaked!