Headlines
Redwan Rahman graduates from FilmdomThe local government minister has instructed to cut the road if necessary to remove the waterRequest to withdraw closure shop at night till EIDThe days of the Western monolithic world are over: PutinLeaders of Germany, France, and Italy in Kyiv to express solidarity‘Presidents of two countries call and pressurized Mbappé’Two U.S. citizens are thought to be missing or taken prisoner in UkraineCOVID: The technical committee suggested lifting some restrictionsPetrol prices hit record highs in the USCanada wants a stern warning against cigarettesThe task force to protect the mountains, demanded the formation of a speedy trial tribunalDepot fire: CID tries to find the cause on CCTVRussian passports are being issued in occupied UkraineFire on Parabat Express: Railroad to Sylhet is normal after 4 hoursAnother 24 children died in Mariupol, Ukraine said
Home Sports Bangladesh’s improvement in the T20 rankings
Facebook
Twitter
WhatsApp
Print 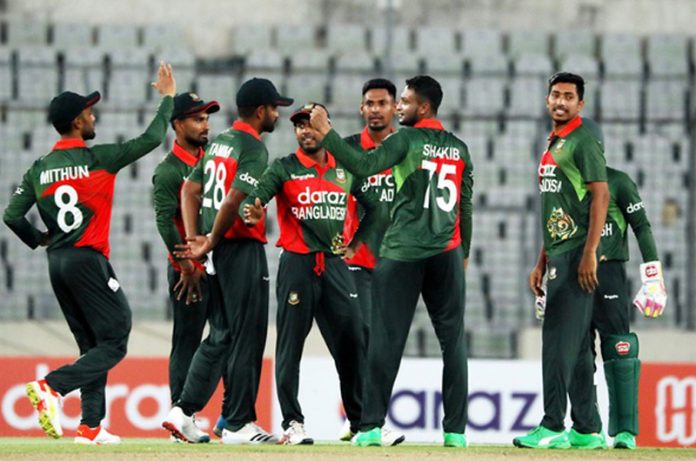 Sports Desk: Bangladesh has risen to the eighth position in the ICC T20 rankings, leaving Afghanistan behind. Bangladesh has taken a step forward in the annual update of ranking. They are ninth in tests and seventh in ODIs as before.

The annual update of the ICC rankings was released on Wednesday. There has been no change in the top spot in the three editions. As before in Tests, Australia, New Zealand in ODIs, and India at the top of the T20.

In the case of ranking updates, all the performances of the teams from May 2019 have been taken into consideration. The performance of the 2018-19 season has gone beyond calculation.

Bangladesh is still looking for ground under its feet in T20. After the defeat in the T20 World Cup, the country was whitewashed against Pakistan. Mahmudullah’s side drew their last series 1-1 against Afghanistan.

Before the World Cup, Bangladesh won the series against Australia (4-1) and New Zealand (3-2) by setting up a spin stage on home soil. Earlier, Zimbabwe won the series 2-1. These victories have played a big role in improving the rankings.

Bangladesh’s new rating is now 233, up to two rating points. Afghanistan has lost 6 rating points this time. With 228 ratings, the team has dropped two steps back to number ten. Sri Lanka is one step ahead in ninth place with 230 points.

India still holds the top spot with 270 rating points. However, the team is 5 points ahead of the two England, the English lost four points (265). Third-placed Pakistan (261) lost three points.

The two-time world champion West Indies is in the seventh position, one step above Bangladesh with 240 points.

Australia, which is at the top of the Test rankings, has narrowed the gap with second-placed India by one point. Australia now has 128 points, up from 119 at home, after losing the series 4-0 to England at home in January. India now increased by one point to 119 points.

England lost 9 points after a bad time, and also dropped from five to six in the rankings. The team’s points are now 6, their lowest since 1995.

Third-placed New Zealand (111) lost four points. Fourth-placed South Africa (110) are now just one point behind them. Pakistan is in fifth place with 93 ratings.

The next four places in the Test rankings did not change. As before, Sri Lanka (81) in seventh place, West Indies (77) in eighth place, Bangladesh (51) in ninth place, and Zimbabwe (25) in tenth place.

Three Australians with 106 points, for India with two points less. They are followed by Pakistan (102) and South Africa (99).

Bangladesh, which is in the seventh position, has increased its rating by 95. They are followed by Sri Lanka (87), West Indies (73), and Afghanistan (66).