Headlines
Redwan Rahman graduates from FilmdomThe local government minister has instructed to cut the road if necessary to remove the waterRequest to withdraw closure shop at night till EIDThe days of the Western monolithic world are over: PutinLeaders of Germany, France, and Italy in Kyiv to express solidarity‘Presidents of two countries call and pressurized Mbappé’Two U.S. citizens are thought to be missing or taken prisoner in UkraineCOVID: The technical committee suggested lifting some restrictionsPetrol prices hit record highs in the USCanada wants a stern warning against cigarettesThe task force to protect the mountains, demanded the formation of a speedy trial tribunalDepot fire: CID tries to find the cause on CCTVRussian passports are being issued in occupied UkraineFire on Parabat Express: Railroad to Sylhet is normal after 4 hoursAnother 24 children died in Mariupol, Ukraine said
Home Headlines Biden on tour in Japan, in-sight China
Facebook
Twitter
WhatsApp
Print 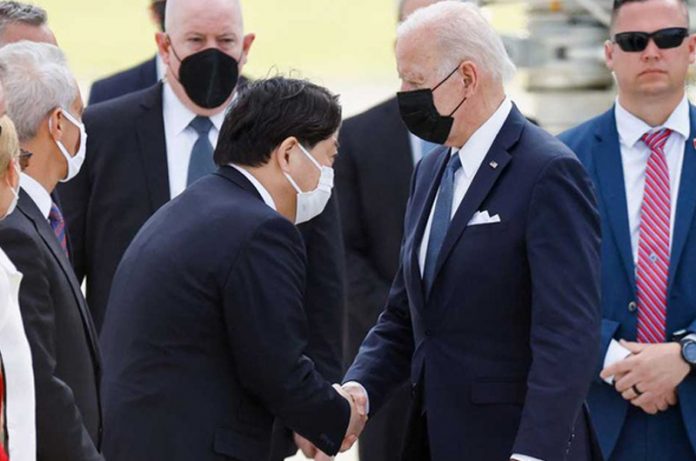 Md. Ashraful Islam: US President Joe Biden has arrived in Japan after South Korea as part of his first Asia tour.

There, China is set to launch a regional economic plan to counter its growing hegemony.

He will also meet with Quadrilateral Security Dialogue or Quad leaders. In addition to the United States, this alliance includes India, Japan, and Australia.

Biden arrived in Japan on Sunday and met with other Japanese business leaders, including the president of the Toyota Motor Corporation, at the ambassador’s residence in Tokyo, an official said.

Biden will speak to Emperor Akihito on the phone before meeting with Japanese Prime Minister Fumio Kishidar on Monday.

In a meeting with Kishidar, Biden is expected to discuss plans to increase Japan’s military capabilities and strengthen China’s response to growing power.

Biden plans to launch the Indo-Pacific Economic Framework for Prosperity (IPEF) on Monday.

These activities will further strengthen the ties between the countries of the region through a single standard in areas such as digital trade, infrastructure, transparent energy, and free and orderly supply.

The Indo-Pacific region has seen a surge in U.S. economic pillars since former U.S. President Donald Trump pulled out of a multinational trans-Pacific trade deal. And in this opportunity, China continues to exert influence there.