Headlines
Redwan Rahman graduates from FilmdomThe local government minister has instructed to cut the road if necessary to remove the waterRequest to withdraw closure shop at night till EIDThe days of the Western monolithic world are over: PutinLeaders of Germany, France, and Italy in Kyiv to express solidarity‘Presidents of two countries call and pressurized Mbappé’Two U.S. citizens are thought to be missing or taken prisoner in UkraineCOVID: The technical committee suggested lifting some restrictionsPetrol prices hit record highs in the USCanada wants a stern warning against cigarettesThe task force to protect the mountains, demanded the formation of a speedy trial tribunalDepot fire: CID tries to find the cause on CCTVRussian passports are being issued in occupied UkraineFire on Parabat Express: Railroad to Sylhet is normal after 4 hoursAnother 24 children died in Mariupol, Ukraine said
Home International Bilawal Bhutto was sworn in as a minister in Pakistan
Facebook
Twitter
WhatsApp
Print 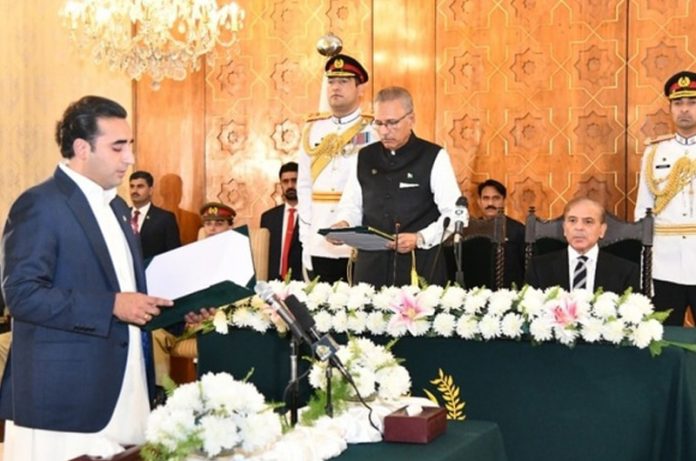 News Desk: Bilawal Bhutto Zardari, chairman of the Pakistan People’s Party (PPP), has been sworn in as a federal minister.

According to The Dawn, Bilawal was sworn in by President Arif Alvi at the presidential palace in Islamabad on Wednesday.

Bilawal, 33, was elected to the first National Assembly in 2016. This time, for the first time, he will serve as a member of the Union Cabinet.

It is unknown at this time what he will do after leaving the post.

Bilawal’s sister said in a tweet that Bilawal would be sworn in as foreign minister in the unity government on Wednesday, as decided by the PPP central executive committee. He also congratulated Bilawal in advance for this.

Bilawal also confirmed at a press conference in Karachi on Tuesday that he would be sworn in as a federal minister on Wednesday, and hinted that he could take over as foreign minister.

Although Bilawal was present at the swearing-in ceremony of Pakistan’s new Union Cabinet on April 19, he did not take the oath. No one was sworn in as foreign minister in the new cabinet that day.

However, PPP’s Hina Rabbani Khar was sworn in as the state minister for foreign affairs. PPP chairman Bilawal has been rumored to be in the ministry since then.

Interviews with some PPP leaders have confirmed that Bilawal has been the foreign minister before, although the issue was still being discussed.

At a news conference on Tuesday, reporters asked Bilawal for his comments on foreign policy, and he said he would hold a press conference soon.

At a news conference on Tuesday, Bilawal also explained why he had decided to join Prime Minister Shahbaz Sharif’s cabinet. “Unilateral decision-making is not possible, and it is the responsibility of all political parties to find a comprehensive solution to the problem,” he said.

“We have to understand that this is not a general coalition government. It is a unity government of the opposition parties. This is a big challenge and everyone has to play their part and share the burden, ” said Bilawal.

PML-N leader Shahbaz Sharif has become the Prime Minister of Pakistan after the departure of Imran Khan after losing the confidence vote a week ago.

The deputy speaker rejected a no-confidence motion against Imran in parliament. President Alvi then dissolved parliament in consultation with the prime minister.

But the Supreme Court declared those two decisions ‘invalid’. That verdict eventually led to a vote of confidence and the fall of Imran Khan’s PTI government.