Headlines
Redwan Rahman graduates from FilmdomThe local government minister has instructed to cut the road if necessary to remove the waterRequest to withdraw closure shop at night till EIDThe days of the Western monolithic world are over: PutinLeaders of Germany, France, and Italy in Kyiv to express solidarity‘Presidents of two countries call and pressurized Mbappé’Two U.S. citizens are thought to be missing or taken prisoner in UkraineCOVID: The technical committee suggested lifting some restrictionsPetrol prices hit record highs in the USCanada wants a stern warning against cigarettesThe task force to protect the mountains, demanded the formation of a speedy trial tribunalDepot fire: CID tries to find the cause on CCTVRussian passports are being issued in occupied UkraineFire on Parabat Express: Railroad to Sylhet is normal after 4 hoursAnother 24 children died in Mariupol, Ukraine said
Home Headlines ‘Bloody fight’ at Mariupol last base, Russia calls for surrender
Facebook
Twitter
WhatsApp
Print 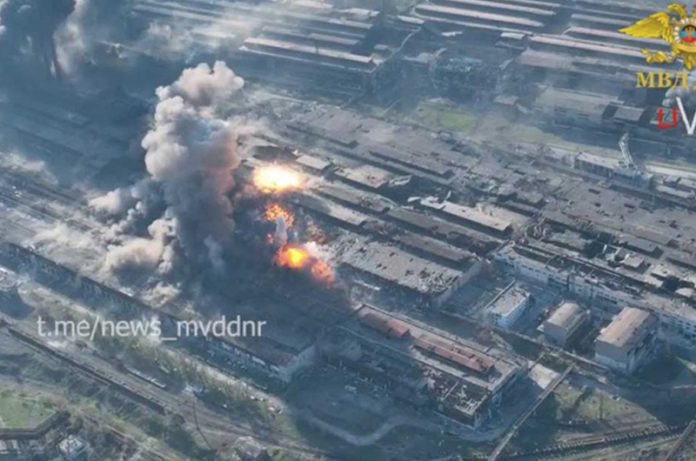 News Desk: Russian troops have broken through a blockade around the Azovstal steel plant, the last base in the southern Ukrainian city of Mariupol.

There has been a bloody battle between Ukrainian fighters and Moscow forces in a last-ditch attempt to seize full control of Mariupol.

Russia’s full control of Mariupol is hampered by a handful of Ukrainian fighters in a factory. Russia will be able to claim full possession of Mariupol only if it wins the war against them.

In that case, before the Russian victory day on May 9, President Putin will be able to declare a military victory in the Ukraine campaign. This will be a great victory for Russia.

The capture of Mariupol is important for Russia. Again, preventing the city from collapsing is also important for Ukraine’s resistance to war. That is why the Ajavastal factory has become a symbol for the image of both sides.

Lieutenant-Colonel Denis Prokopenko, a Ukrainian commander, said there had been “fierce fighting” at the base.

According to the BBC, Russian President Vladimir Putin, in a phone conversation with Israeli Prime Minister Ehud Olmert, said that Ukraine should order the surrender of the remaining troops at the Azvastal factory.

Meanwhile, Putin promised to start a three-day ceasefire on Thursday morning to evacuate civilians trapped in the factory. He also said that Russian troops were ready to provide a safe corridor, according to Moscow officials.

But the battalion commander of the Azavastal factory complained that Russian troops were obstructing efforts to evacuate civilians from the factory.