Headlines
Redwan Rahman graduates from FilmdomThe local government minister has instructed to cut the road if necessary to remove the waterRequest to withdraw closure shop at night till EIDThe days of the Western monolithic world are over: PutinLeaders of Germany, France, and Italy in Kyiv to express solidarity‘Presidents of two countries call and pressurized Mbappé’Two U.S. citizens are thought to be missing or taken prisoner in UkraineCOVID: The technical committee suggested lifting some restrictionsPetrol prices hit record highs in the USCanada wants a stern warning against cigarettesThe task force to protect the mountains, demanded the formation of a speedy trial tribunalDepot fire: CID tries to find the cause on CCTVRussian passports are being issued in occupied UkraineFire on Parabat Express: Railroad to Sylhet is normal after 4 hoursAnother 24 children died in Mariupol, Ukraine said
Home More Politics BNP has been ‘lying’ by quoting foreigners: Hasan
Facebook
Twitter
WhatsApp
Print 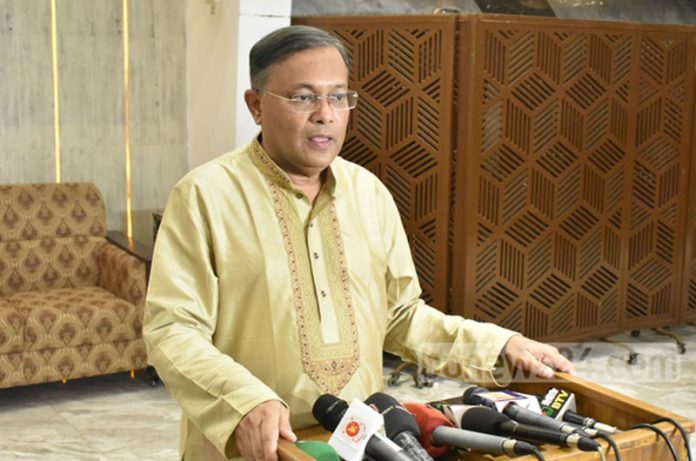 Staff Reporter: Quoting foreigners, the BNP has made ‘false and fabricated’ statements at different times. Hassan Mahmoud said that this was proved by the anger of the German ambassador.

He was responding to a question from reporters at an Iftar at Bahaddarhat in Chittagong on Saturday evening.

He said, “The BNP often makes various statements quoting foreigners, most of which are false and fabricated. This was proved by the outrage of the German ambassador.

Quoting the German ambassador, he said that the BNP had “lied”. Again, to stop helping Bangladesh by writing letters to foreigners.

“BNP Secretary General Mirza Fakhrul Islam Alamgir wrote a letter in his own hand to the US Congressmen to stop aid to Bangladesh.”

Describing Mirza Fakhrul as a ‘champion in lies’, Hassan Mahmood said, “There was no reason for such a big incident to happen in a small incident. The police are arresting the accused after examining the video footage, that is why the BNP leaders have spoken. ”

Vice Chancellor of Chittagong University of Engineering and Technology (CUET) Rafiqul Alam took part in the discussion of the Iftar program organized in honor of the residents of Rangunia living in the city. The acting principal of Jamia Ahmadiyya Sunni Madrasa conducted prayers and munajat. Maulana Liaquat Ali.