Headlines
Redwan Rahman graduates from FilmdomThe local government minister has instructed to cut the road if necessary to remove the waterRequest to withdraw closure shop at night till EIDThe days of the Western monolithic world are over: PutinLeaders of Germany, France, and Italy in Kyiv to express solidarity‘Presidents of two countries call and pressurized Mbappé’Two U.S. citizens are thought to be missing or taken prisoner in UkraineCOVID: The technical committee suggested lifting some restrictionsPetrol prices hit record highs in the USCanada wants a stern warning against cigarettesThe task force to protect the mountains, demanded the formation of a speedy trial tribunalDepot fire: CID tries to find the cause on CCTVRussian passports are being issued in occupied UkraineFire on Parabat Express: Railroad to Sylhet is normal after 4 hoursAnother 24 children died in Mariupol, Ukraine said
Home Headlines Bodies are scattered on the streets of Mariupol and many questions
Facebook
Twitter
WhatsApp
Print 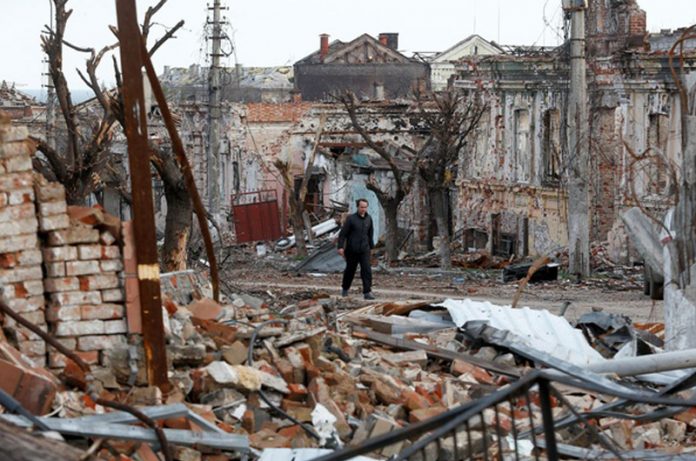 Md. Ashraful Islam: Multiple videos released recently show more than 20 bodies lying on the main road in the Ukrainian port city of Mariupol. All of which appear to be corpses of civilians.

According to the BBC, the graphic videos were posted on social media in the last few days.

Earlier, pictures of civilians lying on the streets in the town of Bucha, near the capital Kiev, caused a stir around the world.

The United Nations says it has launched an investigation into allegations that Russian forces killed hundreds of civilians during Ukraine’s aggression.

That UN investigation is still ongoing. Meanwhile, it was first reported that a mass grave about 65 meters long had been found near Mariupol. About 200 people are thought to have been buried in the mass grave, identified by satellite imagery.

Now, a video of Mariupol’s body has been added.

Fighting has been raging for weeks in the southern Ukrainian city of Mariupol. With most of the city under Russian control, Mariupol could fall at any moment.

The BBC has tried to review the video of Mariupol which was found.

What is seen in the video?

Four videos of bodies lying on a section of a road in Mariupol have been released.

According to the BBC, a video showed 18 bodies. Everyone who looks at the clothes thinks they are civilians. No weapons were seen in the video.

A corpse fell at a bus stop, a bag fell on the market next to it. Another body was found next to a broken car.

According to the BBC, a total of 23 bodies were seen in the four videos.

In addition, the videos show destroyed buildings, torn power lines, and debris lying on the streets. People were also seen walking past the corpses.

Where was the video recorded?

All videos are of a road near Ichil Iron and Steel Works, north of Mariupol. The BBC has confirmed the truth of the road mentioned in the video. The bodies were found on Boika Avenue, a road near the Ilyich Iron Plant.

The buildings, road signs, bus stops, and other objects are seen in the video were considered by the BBC as clues and matched with satellite and road images.

Who made the videos?

According to the BBC, a video was made by Patrick Lanchester, a former US Navy officer. He has been regularly uploading videos from Russia and their allies’ territories in eastern Ukraine to his social media account since 2014.

Lanchester occasionally appeared as a guest on Russian state television. He is also seen on the Inforvers website.

Another video was posted by Italian journalist Vittorio Nicola Rangeloni. He lives in the Donbas region of eastern Ukraine. He has been posting videos of Mariupol on his social media account since last March.

The third and fourth videos were posted by the Russian news agency Anna News and the pro-Kremlin telegram channel Signal.

The BBC has tried to contact both Lanchester and Rangoleni. But there has been no response from them yet.

When was the video captured?

The BBC could not confirm when the videos were recorded. The first video the BBC got online was Anna News Report. It was uploaded on April 15.

The other two videos were most likely posted on April 17 and April 19.

According to the Institute for the Study of War (ISW), the area where the videos were captured was occupied by the Ukrainian army until March 26. On April 8, Russian forces took control of the area. However, according to the Russian Defense Ministry, hundreds of Ukrainian troops surrendered at the Ilyich Iron Plant on April 13.

The BBC has been seeking satellite images of Boika Avenue since last March from US firm Maxer. They have been sending pictures since April 11. It is not clear whether there are dead bodies lying on the road.

How did those people die?

The video asks about the cause of death of people lying next to some pedestrians. They say a Ukrainian sniper killed them. The sniper is targeting people traveling on this road.

“I’m scared, I’m scared,” said one man in a video posted by Rangelloni. They said there was a sniper sitting there, people going to fetch their work documents, and he was shooting them. “

Another said the same thing. However, none of them admitted that they did not see any murder with their own eyes.

The BBC has not been able to independently verify pedestrian statements. They have contacted the Ukrainian and Russian authorities to find out.

In the Lancaster video, a man has long denounced the Ukrainian government and praised President Putin.

The BBC has used computer algorithms to see if the faces of those who spoke in the video matched any other images taken during the war or the faces in the video. But they were not found anywhere in the millions of pictures.

What is the body language of the corpses?

The BBC videos show a former sniper in the army. Who declined to be named.

“It simply came to our notice then.

Showing a corpse, he added that he hoped that after being shot in the head, there would be more bleeding, and it would be seen rolling around. It looks like a sack that encloses by a drawstring.

The BBC has also spoken to a number of forensic pathologists.

One of them is Dr. Victor Wiedon. “All the bodies that were scattered on the road near the Ilyich Iron Plant appear to have died at about the same time,” he said.

“There are clothes on the body in the pictures. It is not possible to say for sure about the cause of death from so far away. But most likely they were shot dead, maybe in the head. “

Another forensic pathologist said. Carl Weigren has said almost the same thing. “Those people died at a very close time,” he said. But even then, the cause of their deaths cannot be ascertained. “

He also mentioned that there was not much blood around the bodies.

“I don’t see much of a visible injury on the fully clothed corpses. This makes me think that most likely these are the result of a blunt force injury. The explosion was caused by a shock wave. “

Showing a corpse, he added, “It has wrought on its face. It looks like the body has been lying there for weeks. There is no meat on the face, maybe some animal has eaten it. ”