Headlines
Redwan Rahman graduates from FilmdomThe local government minister has instructed to cut the road if necessary to remove the waterRequest to withdraw closure shop at night till EIDThe days of the Western monolithic world are over: PutinLeaders of Germany, France, and Italy in Kyiv to express solidarity‘Presidents of two countries call and pressurized Mbappé’Two U.S. citizens are thought to be missing or taken prisoner in UkraineCOVID: The technical committee suggested lifting some restrictionsPetrol prices hit record highs in the USCanada wants a stern warning against cigarettesThe task force to protect the mountains, demanded the formation of a speedy trial tribunalDepot fire: CID tries to find the cause on CCTVRussian passports are being issued in occupied UkraineFire on Parabat Express: Railroad to Sylhet is normal after 4 hoursAnother 24 children died in Mariupol, Ukraine said
Home Sports Chelsea collapsed at Everton in Lampard
Facebook
Twitter
WhatsApp
Print 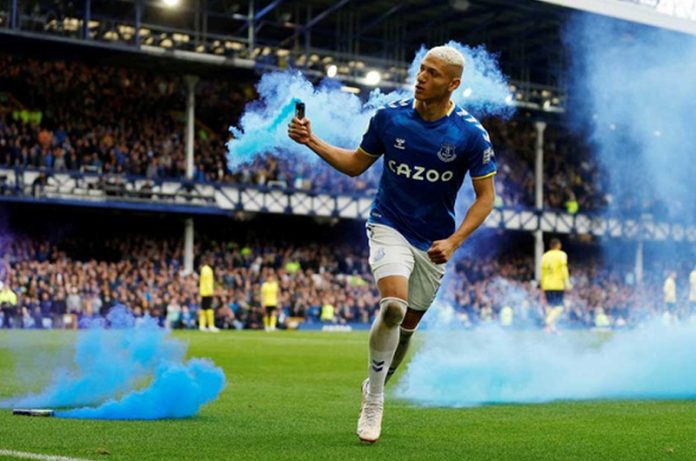 Sports Desk: Chelsea, who had a bad time at home, now lost to their opponents. Thomas Tuchel’s team needed a win to move on to the top four. But Everton’s fight is bigger, to survive in the Premier League. The team at risk of relegation had no choice but to win. Frank Lampyard’s team has achieved that in combat football.

Everton beat Premier League 1-0 at home on Sunday. Brazilian forward Richarlison scored the goal at the beginning of the second half.

Everton has won their last three Premier Leagues matches against Chelsea at Godison Park. They won four consecutive home matches against the London club between 1970 and 1973.

Chelsea, which is ahead in everything from possession of the ball to attack, has repeatedly lost the lead in front of the goal. Everton goalkeeper Jordan Pickford stopped them one by one. His fight did not fail, Richardson brought 3 points to the team.

Even then, Everton is at risk of relegation. They are in 16th place with 9 wins and 5 draws in 33 matches. Chelsea with 3 points in 34 matches.

Everton got a chance to go ahead in the first minute. Anthony Gordon’s free-kick from outside the D-box goes just outside the post.

Chelsea took some time to adjust to the enthusiastic support of the hosts and the start of Everton’s offensive football.

Neither team was able to create a significant opportunity in the first half. Despite several attacks, Tuchel’s side failed to put any shots on target before the break.

Richardson put the team ahead with great skill in the 46th minute. Cesar Aspilicueta brought danger by keeping the ball on his feet for a long time. The Brazilian forward snatched the ball from him and gave the ball to his teammate and found the address.

Everton got the goal and pressed Chelsea. Three minutes later, Vitaly Mikolenko wasted a chance to give the team a 2-0 lead. Goalkeeper Eduan Mondi came out of the line and saved Chelsea from danger. Mikolenko’s shot flew out of the post.

Chelsea increased their attack by adjusting themselves. Mason Mount almost equalized in the 59th minute. He got the ball from Kai Hervatz and took a shot, which was blocked in the post. Then Aspilicueta got the ball inside the box. Pickford thwarted his attempt with a great save.

Everton’s savior Pickford again in the next minute. Antonio Rudigar got the ball from the corner. Going forward, the English goalkeeper failed him.

Both teams created some great opportunities in the counter-attack match. Mateo Kovacic entered the D-box in the third minute of added time, playing one-on-one with Marcos Alonso. The Croatian midfielder’s powerful shot was blocked by Pickford, who showed extraordinary skill throughout the match.

Manchester City and Liverpool are in the top two of the league. At the end of 34 rounds, the points of both teams are 84 and 82 respectively.

Tottenham Hotspur is in fourth place with 61 points in the match.