Headlines
Redwan Rahman graduates from FilmdomThe local government minister has instructed to cut the road if necessary to remove the waterRequest to withdraw closure shop at night till EIDThe days of the Western monolithic world are over: PutinLeaders of Germany, France, and Italy in Kyiv to express solidarity‘Presidents of two countries call and pressurized Mbappé’Two U.S. citizens are thought to be missing or taken prisoner in UkraineCOVID: The technical committee suggested lifting some restrictionsPetrol prices hit record highs in the USCanada wants a stern warning against cigarettesThe task force to protect the mountains, demanded the formation of a speedy trial tribunalDepot fire: CID tries to find the cause on CCTVRussian passports are being issued in occupied UkraineFire on Parabat Express: Railroad to Sylhet is normal after 4 hoursAnother 24 children died in Mariupol, Ukraine said
Home Headlines China imposes strict travel ban
Facebook
Twitter
WhatsApp
Print 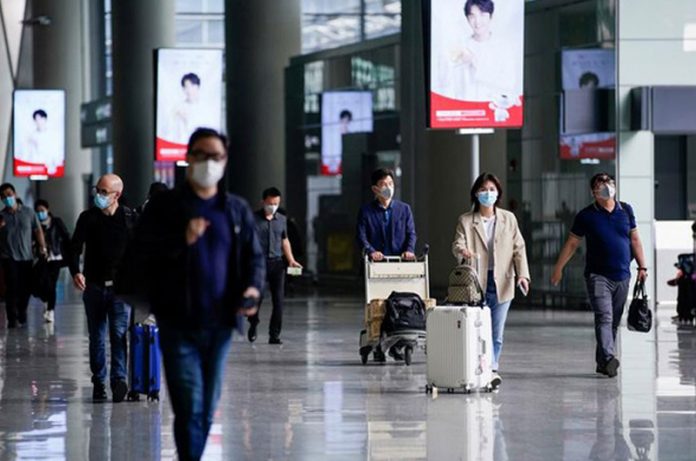 In a statement on Thursday, China’s National Immigration Administration said it would tighten the screening process for travel documents such as passports. Strictly restrict those who wish to travel abroad.

According to CNN, the rationale behind China’s move is to reduce the risk of contracting the virus when leaving the country and re-entering the country.

For this reason, citizens will be allowed to go abroad only for ‘necessary’ purposes such as the resumption of work, study, business, scientific research, and treatment.

According to the announcement, those who want to go abroad to fight the epidemic and provide disaster relief will be given priority.

Officials did not say how the new restrictions would be enforced or how citizens with valid documents would be barred from traveling.

The ban on foreign travel is the toughest move in decades, putting more pressure on the country’s people, CNN writes. This is because, in the last two years, people have endured ‘Draconian-style’ covid control systems, including mass examinations and compulsory quarantine.

Reacting to the government’s decision, a commenter on China’s Weibo platform, such as Twitter, commented:

Others believe that people are trying to leave the country for fear of a new government lockdown, which has led to a resurgence of the Covid epidemic in Beijing, prompting authorities to crack down on travel.

These fears are compounded by the chaos and unemployment in locked-down cities like Shanghai.

Another wrote, “Are we going back to the King Dynasty’s policy of national isolation?”

The Qing Dynasty was the last dynasty of China in the late 19th century and early 20th century when China was separated from the rest of the world.

Until the early 2000s, ordinary Chinese travel abroad was severely restricted. But as the country’s national income increased and the government relaxed the rules, it increased.

According to the country’s immigration authorities, Chinese people traveled abroad 70 million times in 2019, the last normal travel year before the epidemic.

But after the onset of the epidemic in 2021, that number has decreased. At that time, there were only 73 million trips abroad.

Even before that announcement on Thursday, traveling inside or outside China was extremely difficult. The border is still closed to Assad from the outside. Assad is only allowed to enter from outside with Chinese citizens and special visas or immigration permits.

Flights are limited and expensive … and those who want to come usually have to go through a strict 21-day quarantine.

China has further reduced the number of travel documents and dramatically discouraged travel.

According to the Chinese Immigration Administration, only 69.7 million documents were issued in 2021, down from 8 percent in 2019. They will stop renewing passports for “unnecessary” travel in February.

The U.S. Board of Colleges this week announced the cancellation of the Advanced Placement (AP) exam at various locations due to the Covid restrictions, leaving these students already frustrated. These tests are considered an important part of college admissions in the United States.

The frustration of the Chinese people has been growing over the past few months due to the lockdown across the country.

According to CNN, at least 32 cities in China are still under complete or partial lockdown, affecting 220 million people.

The richest city, Shanghai, has been under lockdown since late March. Throughout April, people trapped at home have not received food, medicine, or other necessities.

Recently, there have been allegations through social media that community workers have been forcibly entering people’s homes without permission and damaging their personal belongings during disinfection.

As seen in a viral video, residents are arguing with police officers, trying to force them out of the house. It is unknown at this time what he will do after leaving the post.

After Shanghai, the country’s capital Beijing is expected to be the next target, CNN reported.

Beijing authorities have encouraged residents to stay at home, with public hearings being conducted. Shopping in the supermarkets is a growing panic, with long queues in the market for stockpiling essentials in the event of a lockdown.

Beijing officials have denied the lockdown. He urged the people not to stockpile food. They insist there are enough stocks.

However, their call can hardly come to fruition. The confidence of the people has already been shattered. A similar citywide lockdown was called after Shanghai denied the allegations.

“This is a familiar image,” a Weibo user wrote below a video of Beijing officials trying to calm the public, CNN reported.

Another wrote, “Who wants to take a risk after learning this?”