Headlines
The local government minister has instructed to cut the road if necessary to remove the waterRequest to withdraw closure shop at night till EIDThe days of the Western monolithic world are over: PutinLeaders of Germany, France, and Italy in Kyiv to express solidarity‘Presidents of two countries call and pressurized Mbappé’Two U.S. citizens are thought to be missing or taken prisoner in UkraineCOVID: The technical committee suggested lifting some restrictionsPetrol prices hit record highs in the USCanada wants a stern warning against cigarettesThe task force to protect the mountains, demanded the formation of a speedy trial tribunalDepot fire: CID tries to find the cause on CCTVRussian passports are being issued in occupied UkraineFire on Parabat Express: Railroad to Sylhet is normal after 4 hoursAnother 24 children died in Mariupol, Ukraine saidBelayet, who is in his fifties, has been given a good admission test against young
Home Headlines Clash in New Market: 6 students of Dhaka College identified in Nahid’s...
Facebook
Twitter
WhatsApp
Print 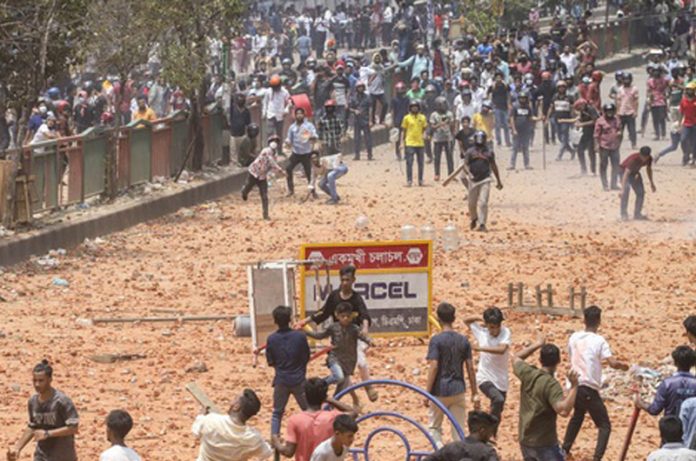 Md. Ashraful Islam: Detective police have identified six students involved in the beating and stabbing to death of deliveryman Nahid Mia during a clash between Dhaka College students and New Market shop workers.

Dhaka Metropolitan Police Deputy Commissioner (Media) Faruk Hossain said on Monday, “They all belong to Dhaka College. Several were wearing helmets at the time of the incident. Attempts are being made to arrest them. “

The Detective Branch (DB), which is in charge of investigating the case, raided the Dhaka College dormitory on Sunday. However, no one was arrested from there.

Police have found out that all the six people who were initially identified are involved in the politics of Chhatra League. However, Deputy Commissioner Farooq did not reveal the names or details of the six.

However, the names of some eyewitnesses and video analysts have already appeared in the media. They are all leaders and activists of the Dhaka College Chhatra League.

Dhaka College Chhatra League has no committee now. Although a convening committee was formed in 2016, it could not form a full committee. The student league of the college is now divided into several parts.

Dhaka College Acting Principal Moinul Hossain said on Monday afternoon that no member of law enforcement had come to him to seek information about any of the identified students.

In response to a question, Principal Moinul Hossain said, “If any member of law enforcement wants to know about any student, help will be provided.”

The acting principal said there was no information that any student had been arrested. They took one, later released him, but took away his mobile phone. “

After the workers of two shops in New Market started arguing over setting the Iftar table on April 18, one party called some BCL workers from Dhaka College dormitory. They returned to the dormitory after being beaten and went to attack the New Market at midnight on Monday with more students.

The next day, more than 50 people were injured in the day-long clashes. Among them was Nahid, a deliveryman at a computer accessories store on Elephant Road. A shopkeeper named Morsalin was injured in the brick attack. They later died at the hospital.