Headlines
Redwan Rahman graduates from FilmdomThe local government minister has instructed to cut the road if necessary to remove the waterRequest to withdraw closure shop at night till EIDThe days of the Western monolithic world are over: PutinLeaders of Germany, France, and Italy in Kyiv to express solidarity‘Presidents of two countries call and pressurized Mbappé’Two U.S. citizens are thought to be missing or taken prisoner in UkraineCOVID: The technical committee suggested lifting some restrictionsPetrol prices hit record highs in the USCanada wants a stern warning against cigarettesThe task force to protect the mountains, demanded the formation of a speedy trial tribunalDepot fire: CID tries to find the cause on CCTVRussian passports are being issued in occupied UkraineFire on Parabat Express: Railroad to Sylhet is normal after 4 hoursAnother 24 children died in Mariupol, Ukraine said
Home More Environment Climate and renewable energy: Dhaka-Copenhagen activities will increase
Facebook
Twitter
WhatsApp
Print 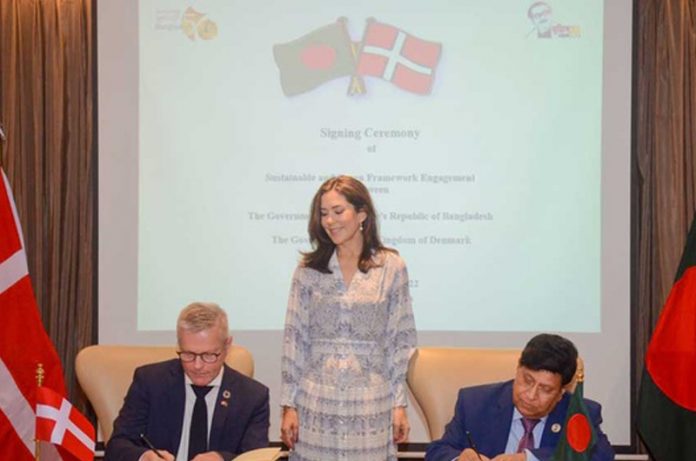 Staff Reporter: Bangladesh has signed a bilateral cooperation agreement with Denmark to work on a wide range of issues related to climate change and renewable energy.

The document titled ‘Sustainable and Green Framework Engagement’ was signed in the presence of visiting Danish Crown Princess Mary Elizabeth at La Meridian Hotel in Dhaka on Monday.

The Foreign Minister then held a bilateral meeting with the Danish Minister. During the talks, various aspects of bilateral cooperation between the two countries came up.

Regarding the signed document, Momen said, “It is a general framework. Under this, we will take many action programs. Denmark is very vocal on climate issues. And we are not only good at climate issues, we are also the president of the Climate Vulnerable Forum. ”

He said that the framework for tackling and adapting to climate change would be unveiled through this framework.

On what kind of cooperation would be available under this, the Foreign Minister said that in the light of the framework, the modus operandi of the cooperation program on climate change and renewable energy would be fixed.

“As much as there is work, we can state the requirements. They will support us with money, technology, and expert knowledge. In this case, they are pioneers. ”

“Denmark has good expertise in wind power and solar power. They will help us achieve our goals. ”

Meanwhile, a joint press release quoting Danish Minister for Development and Cooperation Mortensen said, “Denmark and Bangladesh have a strong and active involvement in the global climate change agenda.

“The signing of the Green Framework Document, signed today, is a sign that the Paris Climate Agreement is moving towards implementation.”

Referring to the meeting between the two ministers on cooperation with the Rohingya, Momen said, “They are aware of the fact that the Rohingyas are destroying the vegetation in the area. They will also help us with climate issues there. ”

He also called on Denmark to co-operate with the Gambian government’s lawsuit against Myanmar’s military genocide.

“I said, help the Gambia there so that genocide does not happen anywhere else in the world,” he said. He agreed to that. I hope they will help. “

Referring to Denmark’s assistance of 2 million Euros for the Rohingya in Bhasanchar, Momen said, “They are very vocal about this. Together with the European Union, they are doing everything in their power to address the Rohingya issue. They will be members of the Security Council, and we urge them to play a stronger role. “