Headlines
Redwan Rahman graduates from FilmdomThe local government minister has instructed to cut the road if necessary to remove the waterRequest to withdraw closure shop at night till EIDThe days of the Western monolithic world are over: PutinLeaders of Germany, France, and Italy in Kyiv to express solidarity‘Presidents of two countries call and pressurized Mbappé’Two U.S. citizens are thought to be missing or taken prisoner in UkraineCOVID: The technical committee suggested lifting some restrictionsPetrol prices hit record highs in the USCanada wants a stern warning against cigarettesThe task force to protect the mountains, demanded the formation of a speedy trial tribunalDepot fire: CID tries to find the cause on CCTVRussian passports are being issued in occupied UkraineFire on Parabat Express: Railroad to Sylhet is normal after 4 hoursAnother 24 children died in Mariupol, Ukraine said
Home More Environment Climate risk: The Prime Minister wants more participation of rich countries
Facebook
Twitter
WhatsApp
Print 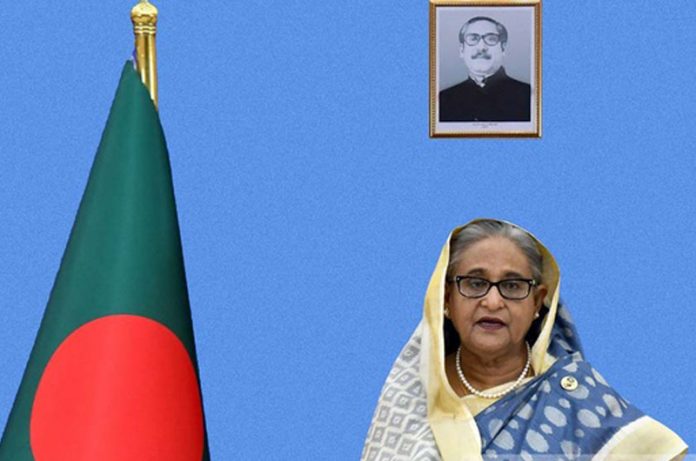 Staff Reporter: Prime Minister Sheikh Hasina has called upon the major economies to work with all stakeholders on a partnership basis to ensure a sustainable future for the next generation.

The prime minister was speaking at a high-level event titled “Major Economy Forum on Energy and Climate” in Washington, DC on Friday. The event was organized at the invitation of US President Joe Biden.

The Prime Minister also called upon the major economies to play an important role in the COP 26 conference to be held in Glasgow next November. He hopes that the conference will yield strong and significant results.

He put forward six-point proposals for consideration in Friday’s forum, including reducing carbon emissions from the world’s largest emitters, allocating funds to the climate fund as promised, and transferring technology.

In the first phase, the Prime Minister hoped that the industrialized countries would take necessary steps to reduce carbon emissions to limit global warming (compared to the pre-industrial era) to 1.5 degrees Celsius.

In the second phase, he said, the developed countries would have to meet their annual অঙ্গ 100 billion pledge for climate funding and distribute a 50:50 ratio between adaptation and mitigation.

In her third proposal, the Prime Minister called on developed countries to come forward with the most efficient energy solutions, besides transferring technology to developing countries.

In the fourth proposal, he said that in the transition to the use of renewable energy, the respective development priorities of the nation-states should be taken into consideration and how much they have lost and suffered.

In the fifth proposal, he said, all countries need to share responsibility for the repatriation of people displaced by rising sea levels and salinity, river erosion, floods, and droughts.

In her latest resolution, Sheikh Hasina said the major economies need to work with all global partners on a partnership basis to ensure a sustainable future for the next generation.

Mentioning Bangladesh as one of the countries most at risk of climate change, the Prime Minister said Bangladesh is facing severe climate impact due to rising sea level and salinity, river erosion, floods and drought, and 1.1 million Rohingya being forcibly displaced from Myanmar.

As President of the Climate Risk Forum (CVF) and V-20, the Prime Minister said Bangladesh’s main goal is to highlight the interests of climate-risk-prone countries.

He also mentioned that Bangladesh is continuing its best activities through the South Asia Regional Office of the Global Center on Adaptation in Dhaka.

Sheikh Hasina said Bangladesh is going to implement the ‘Mujib Climate Prosperity Plan’, which will run an activity ranging from climate risk to climate tolerance and from there to climate prosperity.