Headlines
Redwan Rahman graduates from FilmdomThe local government minister has instructed to cut the road if necessary to remove the waterRequest to withdraw closure shop at night till EIDThe days of the Western monolithic world are over: PutinLeaders of Germany, France, and Italy in Kyiv to express solidarity‘Presidents of two countries call and pressurized Mbappé’Two U.S. citizens are thought to be missing or taken prisoner in UkraineCOVID: The technical committee suggested lifting some restrictionsPetrol prices hit record highs in the USCanada wants a stern warning against cigarettesThe task force to protect the mountains, demanded the formation of a speedy trial tribunalDepot fire: CID tries to find the cause on CCTVRussian passports are being issued in occupied UkraineFire on Parabat Express: Railroad to Sylhet is normal after 4 hoursAnother 24 children died in Mariupol, Ukraine said
Home Uncategorized Colombia’s ‘drug lord’ Otoniel arrested
Facebook
Twitter
WhatsApp
Print 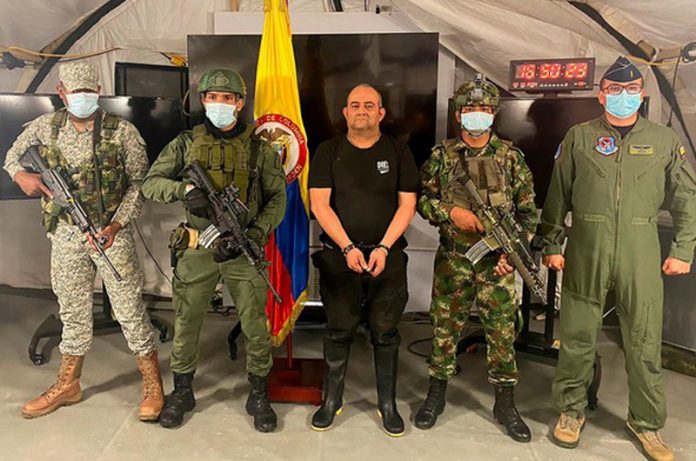 According to the BBC, this ‘drug lord’ of Colombia is better known as Otoniel. He was arrested in a joint operation by the army, air force, and police on Saturday.

The Colombian government has announced a লাখ 800,000 reward for information leading to the capture of Otoniel. And the United States has put the price of his head at 5 million dollars.

“This is the biggest push against drug traffickers in our country in this century,” Colombian President Evan Duque said in a video message. It’s just like the fall of Pablo Escobar in the 1990s. “

Otoniel, 50, was detained at his home in the Uraba region of Colombia’s northwestern province of Antioch. The area is near the Panama border. A police officer was killed during the operation, President Doke said.

Prior to this success, the security forces had conducted several failed operations in the last few years to nab the culprit. Thousands of security officials took part in the operation but to no avail.

Colombian security forces have identified the ring as the country’s most influential criminal group. And U.S. officials have described the cycle as “massively armed and extremely violent.”

The ring, which operates in several Colombian provinces, also has extensive international contacts. They are involved in drug and human trafficking, illegal gold mining operations, and extortion, the BBC reports.

The clique is estimated to have 1700 armed members. Most of them have been recruited from far-right paramilitary groups. Members of the ring have also been arrested in remote countries such as Argentina, Brazil, Honduras, Peru, and Spain.

Many of the routes used in drug smuggling from Colombia to the United States and further afield to Russia are controlled by this criminal group.

But the Colombian government believes their recent activities have destroyed much of the cycle’s power and forced many of its leading members to hide in remote jungle areas.

Otoniel has been accused of sending dozens of cocaine shipments to the United States, killing police officers, and recruiting children. Otoniel, who was indicted in the United States in 2009, may have been extradited to that country and could eventually be seen in a New York court, the BBC reported.