Headlines
Redwan Rahman graduates from FilmdomThe local government minister has instructed to cut the road if necessary to remove the waterRequest to withdraw closure shop at night till EIDThe days of the Western monolithic world are over: PutinLeaders of Germany, France, and Italy in Kyiv to express solidarity‘Presidents of two countries call and pressurized Mbappé’Two U.S. citizens are thought to be missing or taken prisoner in UkraineCOVID: The technical committee suggested lifting some restrictionsPetrol prices hit record highs in the USCanada wants a stern warning against cigarettesThe task force to protect the mountains, demanded the formation of a speedy trial tribunalDepot fire: CID tries to find the cause on CCTVRussian passports are being issued in occupied UkraineFire on Parabat Express: Railroad to Sylhet is normal after 4 hoursAnother 24 children died in Mariupol, Ukraine said
Home Country Communal attacks: Protesters leave Shahbag demanding law to protect ‘minorities’
Facebook
Twitter
WhatsApp
Print 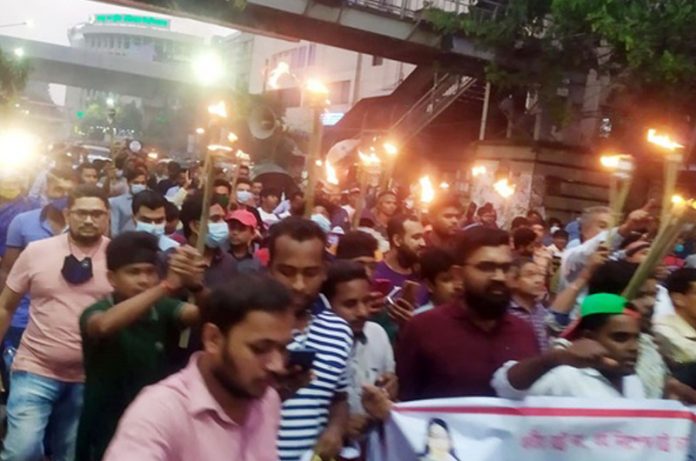 Representative of Dhaka University: Protesters have left Shahbagh, giving the government two weeks to legislate and form a commission to protect religious minorities.

Leaders and activists of various organizations of the Hindu community, led by the Bangladesh Hindu Parishad staged a protest by blocking the Shahbagh junction for about two and a half hours from 4 pm on Friday.

From there at around 6.45 pm they went to the National Press Club with a torch procession and ended their program.

Earlier, the Bangladesh Hindu Parishad organized a protest rally in front of the Shahbagh National Museum, demanding justice for those involved in the communal attack and security of religious minorities.

Sajan Kumar Mishra, general secretary of the council, said from the protest rally in Shahbag, “We are giving a two-week ultimatum to the government to enact the Minority Protection Act and form a commission.” If we do not see the need to enact minority protection legislation within these two weeks, we will announce a march along with the Prime Minister’s Office. ”

The blockade demanded the formation of a tribunal to expedite the prosecution of communal attacks, compensation of Rs 50 lakh to each of the affected families, enactment of the Minority Protection Act, and formation of a National Minorities Commission.

Advocate Sumon Kumar Roy, president of the Bangladesh Hindu Bar Council, said during the protest in Shahbag, “You know what a hellish attack on traditional religions across the country. The administration has failed to fulfill its responsibilities there. The state has failed to provide security to minorities.”

Earlier in the day, protesters chanted slogans such as “Wake up, wake up, wake up the Hindus”, “Break the abode of fundamentalism, demolish it”, “Break the abode of jihadists, demolish it”, “Your is my address, Padma-Meghna-Jamuna”. Why the attack on the temple, the administration wants an answer ‘,’ Why the fire in Rangpur, the administration wants an answer ‘.

During the Durga Puja, on the morning of October 13, a puja mandapa of Darpan Sangha on the banks of Comilla Nanua Dighi was attacked for allegedly insulting the religion by keeping the holy book of Muslims, the Quran.

Then it spread to different parts of the country, including Comilla. The temple and the puja mandapa were attacked and vandalized, as well as deaths.

Several other organizations, including the Hindu Parishad, have been protesting since the incident.