Headlines
Redwan Rahman graduates from FilmdomThe local government minister has instructed to cut the road if necessary to remove the waterRequest to withdraw closure shop at night till EIDThe days of the Western monolithic world are over: PutinLeaders of Germany, France, and Italy in Kyiv to express solidarity‘Presidents of two countries call and pressurized Mbappé’Two U.S. citizens are thought to be missing or taken prisoner in UkraineCOVID: The technical committee suggested lifting some restrictionsPetrol prices hit record highs in the USCanada wants a stern warning against cigarettesThe task force to protect the mountains, demanded the formation of a speedy trial tribunalDepot fire: CID tries to find the cause on CCTVRussian passports are being issued in occupied UkraineFire on Parabat Express: Railroad to Sylhet is normal after 4 hoursAnother 24 children died in Mariupol, Ukraine said
Home Crime Conflict in New Market: Two murder cases are going on in DB
Facebook
Twitter
WhatsApp
Print 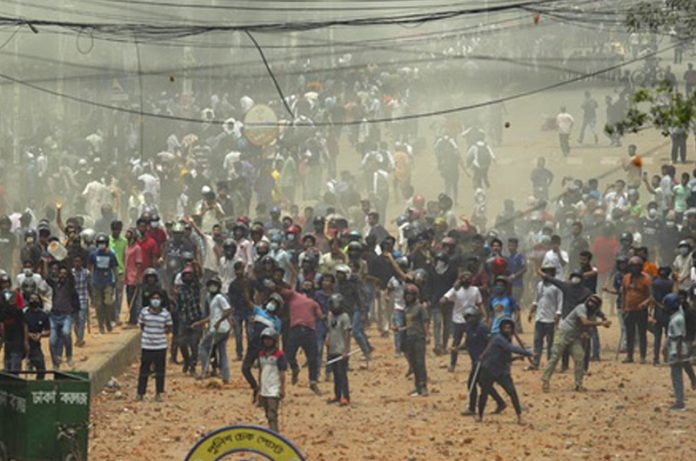 Md. Ashraful Islam: Detective police are investigating two of the four murder cases in which students of Dhaka College clashed with shop owners and staff in the New Market area of ​​the capital.

A murder case was registered on Wednesday night in connection with the death of deliveryman Nahid Mia in a clash.

New Market Police OC Sham Qayyum said, Nahid’s uncle was killed. The murder case filed by Saeed has been handed over to the detective police.

“Everything, including the docket, was handed over to the detective police on Friday.”

Another murder case was registered on Thursday night in connection with the death of shop worker Morsalin. In this case, also 100 to 150 unidentified persons have been accused.

New Market Zone Additional Commissioner of Police Shahenshah said, “This case will also be handed over to the detective police.”

However, no arrests have been made so far, he said, adding that “police are analyzing CCTV cameras and other videos.”

Asked about the identification of three students of Dhaka College in the CCTV camera video inside gate number four of New Market, he said, “Police are working on everything, who were wearing helmets and who went to the area from outside.”

New Market Police Station SI Mehedi Hasan has filed a case under the Explosives Act outside the murder case. The Inspector (investigation) of the same police station Yamin Kabir has filed another case alleging rioting, arson, and obstruction of police work.

In the case of Inspector Yamin Kabir, there are names of 24 people including the former president of New Market Thana BNP Advocate Maqbool Hossain.

The two shops, Welcome and Capital Fastfood, have been at loggerheads with each other over the allocation of Maqbool from the two city corporations. However, do not run any shop yourself. Rafiqul Islam and Shahidul Islam have rented two shops. Rafiqul and Shahidul are relatives again.

The 24 people named in the case are leaders and activists of various BNP organizations in Ward No. 18.

The OC said, ” Those whose names have been mentioned have been charged as instigators. However, the case does not mention whether they belong to any political party. ”

An intelligence official said they were working to determine if the incident was a show of strength between the two shops, or whether it was politically motivated.

The bloody clash between the students and the shopkeepers started on Monday night after some students of Dhaka College were beaten in a food shop in New Market.

According to the shop owners, one of the employees of the two shops got into a quarrel and one party called some BCL workers from the Dhaka College dormitory.

They went back to the dormitory after being beaten and went to attack the New Market at midnight with more students.

More than 50 people were injured in the day-long clashes on Tuesday. Among them was a 16-year-old boy named Nahid Mia who was stabbed in the street.

Nahid worked as a delivery assistant at a store called Data Tech Computer on Elephant Road. He died on Tuesday night while undergoing treatment at Dhaka Medical College.

According to the police inquest, Nahid had four cuts on the left side of his head, two to three and a half inches long. Doctors gave 23 stitches to four wounds.

Three cut wounds on the left side of the back as well. Each of which is five inches long. There were also five stitches in the cut below the ankle of the left foot, and there were bluish-black wounds in different places on both feet. There were bruises on the nose and mouth.

Morsalin, a shop worker who was hit by a brick in Tuesday’s clash, died early Thursday while undergoing treatment.