Headlines
Redwan Rahman graduates from FilmdomThe local government minister has instructed to cut the road if necessary to remove the waterRequest to withdraw closure shop at night till EIDThe days of the Western monolithic world are over: PutinLeaders of Germany, France, and Italy in Kyiv to express solidarity‘Presidents of two countries call and pressurized Mbappé’Two U.S. citizens are thought to be missing or taken prisoner in UkraineCOVID: The technical committee suggested lifting some restrictionsPetrol prices hit record highs in the USCanada wants a stern warning against cigarettesThe task force to protect the mountains, demanded the formation of a speedy trial tribunalDepot fire: CID tries to find the cause on CCTVRussian passports are being issued in occupied UkraineFire on Parabat Express: Railroad to Sylhet is normal after 4 hoursAnother 24 children died in Mariupol, Ukraine said
Home Entertainment Dear Satyajit: The poster came on the death anniversary, after the release...
Facebook
Twitter
WhatsApp
Print 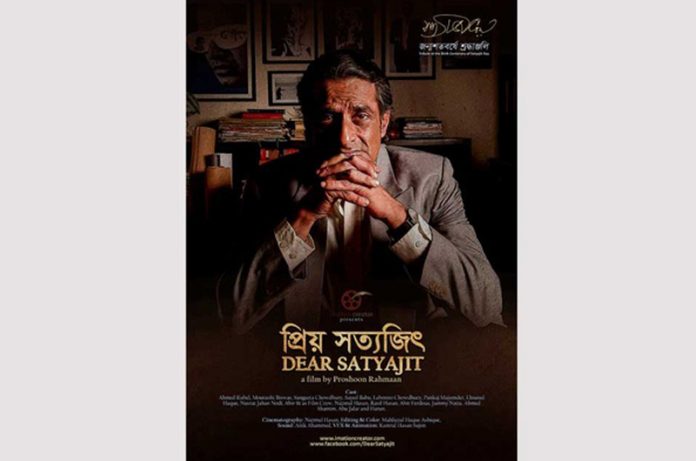 Entertainment Desk: The Dhaka movie ‘Priya Satyajit’, made on the occasion of the birth centenary of the legendary filmmaker of the Indian subcontinent, is being released after EID.

Producer Prasoon Rahman has released a pair of posters of the movie ‘Priyo Satyajit’ on Friday night ahead of his death anniversary on April 23.

Prasoon Rahman said that the movie has already got censor clearance; After EID, ‘Priya Satyajit’ will be released in cinemas.

Though there was a plan to release on the occasion of Satyajit Ray’s birth anniversary on May 2, it has been postponed, said Prasoon.

The movie is made under the banner of Emation Creator, the producer’s own production company.

According to the producer, Satyajit Ray has a direct and indirect influence on the development of many filmmakers in the subcontinent. Most of the people who have been interested in making life-oriented films for the last 50 years are almost ideal producers. With such passion, this tribute film called ‘Priyo Satyajit’ was made in Bangladesh.

The film was shot in the house of Satyajit Ray’s grandfather Upendrakishore Roy Chowdhury in Kishoreganj and a few other areas and a house in Old Dhaka.

According to the producer, the story of the movie is about three filmmakers of three periods. The first is Ray himself. Who exists there even though he is not present. And the other two of the next two generations.

While visiting the house of his grandfather Upendrakishore Roy Chowdhury with Satyajit Ray and his creations, new producer Aparajita Haque discovered another story of veteran producer Asif Mahmud who was associated with Satyajit Ray’s ‘Apu Trilogy’.

Some real crew is playing the role of Aparajita’s collaborating film crew. Among them are photographers Nazmul Hasan, Rasif Chowdhury, Mukhar, Abiha, Shamim, and Zafar.