Headlines
Redwan Rahman graduates from FilmdomThe local government minister has instructed to cut the road if necessary to remove the waterRequest to withdraw closure shop at night till EIDThe days of the Western monolithic world are over: PutinLeaders of Germany, France, and Italy in Kyiv to express solidarity‘Presidents of two countries call and pressurized Mbappé’Two U.S. citizens are thought to be missing or taken prisoner in UkraineCOVID: The technical committee suggested lifting some restrictionsPetrol prices hit record highs in the USCanada wants a stern warning against cigarettesThe task force to protect the mountains, demanded the formation of a speedy trial tribunalDepot fire: CID tries to find the cause on CCTVRussian passports are being issued in occupied UkraineFire on Parabat Express: Railroad to Sylhet is normal after 4 hoursAnother 24 children died in Mariupol, Ukraine said
Home More Editors Choice Dengue control
Facebook
Twitter
WhatsApp
Print 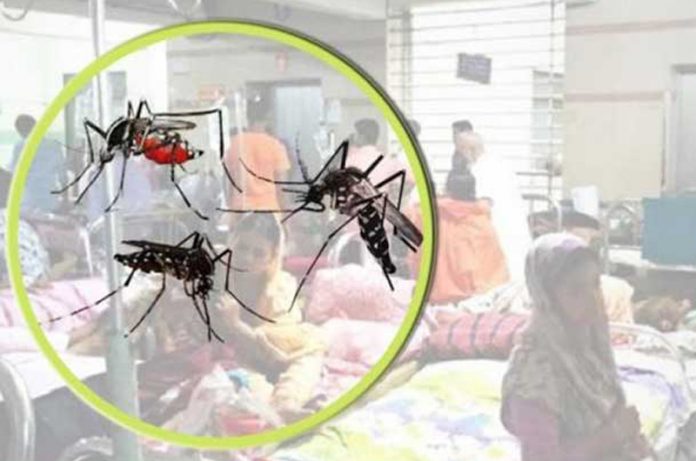 News Desk: Entomologists are questioning the quality of mosquito control work of Dhaka’s two city corporations in view of the increasing number of dengue patients in the capital. They say that proper action is not being taken to eradicate Aedes mosquitoes. There are flaws in mosquito control management.

Now it is necessary to kill the mosquitoes quickly by intensive fogging and parricide. The deficit is going to be noticed in this activity. The main reason for the increase in dengue cases in Dhaka is the failure of mosquito control activities.

It may be mentioned that TK 95.25 crore has been spent on mosquito control in the fiscal year 2020-21. Despite this, the Aedes mosquito has taken a terrible form this time in the dengue season. As a result, the number of dengue patients is increasing. Officially, the number of dengue patients has exceeded 10,000; In fact, experts think that this number is much higher.

In fact, while everyone is busy preventing corona, the prevalence of dengue is on the rise. Almost every day, people in different parts of the country, including the capital, are being infected with dengue fever. The death rate is also increasing. However, due to the corona situation, the health service has almost collapsed, and many people are not being admitted to the hospital even though they have fevers. This is the main reason why the exact picture of dengue is not being reflected. Extensive preparations were needed in advance to prevent the spread of dengue.

The point is not that mosquito eradication activities should be carried out as soon as the dengue season arrives. Experts have been advising for year-round activities to control Aedes mosquitoes throughout the year. Sadly, the two city corporations of Dhaka did not take appropriate steps in this regard.

To prevent the spread of dengue, the city corporation must give utmost importance to the destruction of Aedes mosquito breeding grounds. Since there is no vaccine to prevent dengue; So the only way to stay safe is to protect people from mosquito bites. Therefore, care should be taken so that water does not accumulate anywhere. Besides, the responsibility of the concerned organizations including the City Corporation is to remove the stagnant water in all parts of the city, especially in places where there is a conducive environment for mosquito breeding, and to make arrangements for effective spraying of mosquito repellent.

Where there is no rainwater drainage system, water naturally accumulates for a few days. It is more common, especially in areas where construction is underway. In addition to removing stagnant water in these places, regular mosquito repellent should be sprayed. It should be noted that the Aedes mosquito does not get a chance to lay eggs in any way. In order to stay safe and healthy, the government, as well as every citizen, should be aware and vigilant to prevent the spread of Aedes mosquitoes, this is desirable.