Headlines
The local government minister has instructed to cut the road if necessary to remove the waterRequest to withdraw closure shop at night till EIDThe days of the Western monolithic world are over: PutinLeaders of Germany, France, and Italy in Kyiv to express solidarity‘Presidents of two countries call and pressurized Mbappé’Two U.S. citizens are thought to be missing or taken prisoner in UkraineCOVID: The technical committee suggested lifting some restrictionsPetrol prices hit record highs in the USCanada wants a stern warning against cigarettesThe task force to protect the mountains, demanded the formation of a speedy trial tribunalDepot fire: CID tries to find the cause on CCTVRussian passports are being issued in occupied UkraineFire on Parabat Express: Railroad to Sylhet is normal after 4 hoursAnother 24 children died in Mariupol, Ukraine saidBelayet, who is in his fifties, has been given a good admission test against young
Home Sports Domingo will not talk about the BCB president
Facebook
Twitter
WhatsApp
Print 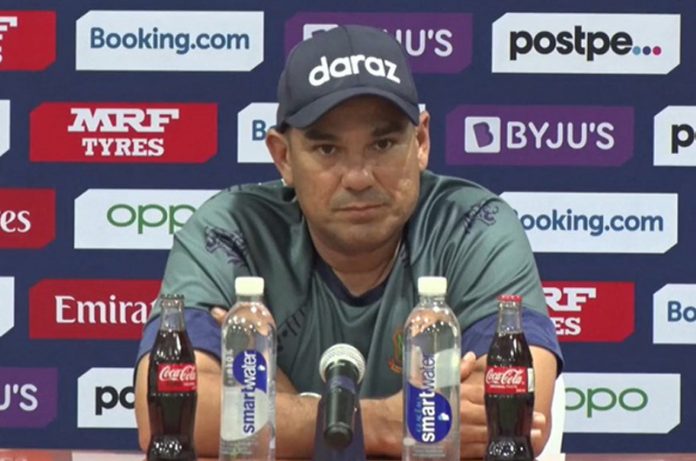 Sports Correspondent: BCB president Nazmul Hasan blamed the batting of three senior cricketers for the loss. Russell Domingo did not go deep into that discussion. The Bangladesh coach made it clear that he did not have any discussion outside the team.

Those who relied on the team were the cause of Bangladesh’s disappointment in the first match of the T20 World Cup. Shakib Al Hasan made 20 runs off 26 balls. Mushfiqur Rahim made 36 off 36 balls after hitting six off two balls. The pair of 48 runs took 48 balls. Later Mahmudullah played 22 balls and made only 23.

The height that the required run rate reaches in their slow batting, others have not been able to match that difficult equation.

The day after the team lost, BCB president Nazmul Hasan told the media that the team lost because of the batting of three senior cricketers.

Domingo’s opinion was sought in the context of the BCB president’s statement. The Bangladesh coach did not go directly to that context and kept the cricketers at bay.

“I am not here to talk to the president. Everyone has the right to give their opinion. From my point of view, I will not criticize my cricketers. I have full faith in them, I have full confidence. ”

“Everything outside the team doesn’t matter to me right now. My focus is entirely on my team and it makes sure that we are 100% by their side so that they can perform well. ”

Shakib has not been in rhythm with the bat for some time. His best batting time is far away, normal batting is not seen in recent times. Mushfiqur is also playing in the New Zealand series. Mahmudullah occasionally played effective innings but was not consistent enough.

Where experience is supposed to be an asset, is it becoming a burden in the Bangladesh team? The coach doesn’t think so at all.

“They can never be understood. They are world-class. They themselves know that the level at which they are used to play, they could not play in this match. However, they are champion cricketers for Bangladesh. I have no reason to question their ability. ”

“Riyadh has won matches against Australia and New Zealand a few days ago. Maybe he was uncomfortable not playing in the preparation match. But I will never question its value. They say this is a great performance. ”