Headlines
Redwan Rahman graduates from FilmdomThe local government minister has instructed to cut the road if necessary to remove the waterRequest to withdraw closure shop at night till EIDThe days of the Western monolithic world are over: PutinLeaders of Germany, France, and Italy in Kyiv to express solidarity‘Presidents of two countries call and pressurized Mbappé’Two U.S. citizens are thought to be missing or taken prisoner in UkraineCOVID: The technical committee suggested lifting some restrictionsPetrol prices hit record highs in the USCanada wants a stern warning against cigarettesThe task force to protect the mountains, demanded the formation of a speedy trial tribunalDepot fire: CID tries to find the cause on CCTVRussian passports are being issued in occupied UkraineFire on Parabat Express: Railroad to Sylhet is normal after 4 hoursAnother 24 children died in Mariupol, Ukraine said
Home More Politics EC formed again through search committee: Information Minister
Facebook
Twitter
WhatsApp
Print 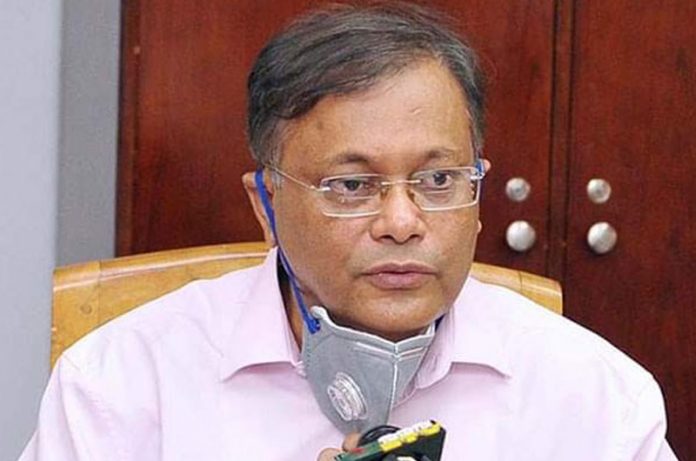 Senior Reporter: Information and Broadcasting Minister Hasan Mahmud has said that the President will again form the Election Commission through a ‘search committee.

He was responding to a question from reporters after a meeting with representatives of the Editor’s Forum in the conference room of the Information Ministry at the Secretariat on Thursday.

The governing body has the authority to form the Election Commission. In the absence of law, the President has been forming it with recommendations through the search committee.

Two days ago, BNP secretary general Mirza Fakhrul Islam Alamgir objected to the formation of the Election Commission through a search committee, saying it was a “deception” with the people.

In response, the Information Minister said, “Mr. Mirza Fakhrul Islam Alamgir speaks every day. He said the same thing every day. There is no difference in words. ”

Regarding the BNP’s demand for a non-partisan government during the elections, Awami League joint general secretary Hasan Mahmud said, “There will never be a caretaker government in Bangladesh.

“According to the constitution, the current government will be in charge of the elected government. Routine will work. And the election will be under the Election Commission. Elections are not held under the government. This is the case in all developed countries. It will be the same in our country. ”

‘Clean feed implementation will be tough’

Information and Broadcasting Minister Hasan Mahmud has said that there will be austerity measures taken by the government to implement clean feed on foreign channels.

He said, “Implementing clean feed was not an easy task. It has not been implemented in 15 years. We have taken the initiative once before. It was not possible to do that on various excuses. This time we have implemented the decision by doing groundwork in advance and informing all the places that can be discussed. So we will not budge from this decision. ”

Clean feed means it can’t contain any ads Foreign advertisements are also seen on foreign channels shown in Bangladesh. The government has been strict to stop it.