Headlines
The local government minister has instructed to cut the road if necessary to remove the waterRequest to withdraw closure shop at night till EIDThe days of the Western monolithic world are over: PutinLeaders of Germany, France, and Italy in Kyiv to express solidarity‘Presidents of two countries call and pressurized Mbappé’Two U.S. citizens are thought to be missing or taken prisoner in UkraineCOVID: The technical committee suggested lifting some restrictionsPetrol prices hit record highs in the USCanada wants a stern warning against cigarettesThe task force to protect the mountains, demanded the formation of a speedy trial tribunalDepot fire: CID tries to find the cause on CCTVRussian passports are being issued in occupied UkraineFire on Parabat Express: Railroad to Sylhet is normal after 4 hoursAnother 24 children died in Mariupol, Ukraine saidBelayet, who is in his fifties, has been given a good admission test against young
Home More Metropolitan Eid Jamaat is in that Tetultala ground
Facebook
Twitter
WhatsApp
Print 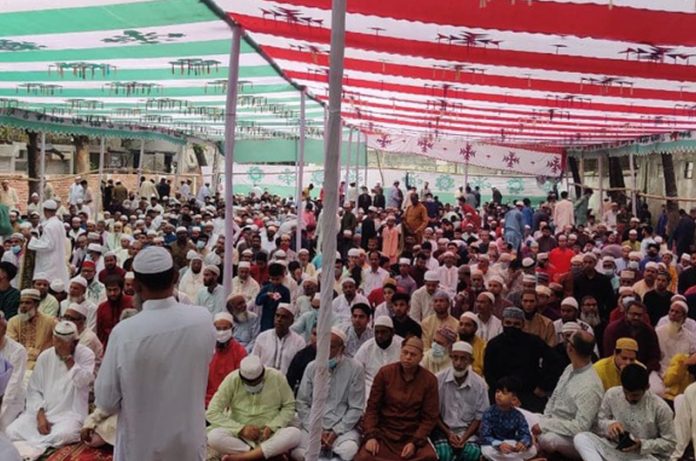 Senior Reporter: After defending the Tentultala field of Kalabagan in Dhaka, the locals offered EID prayers there.

Eid-ul-Fitr congregation was held at Tetultala ground at 8 am on Tuesday. Muslims of different ages in the area took part in it.

Awnings are erected on the ground around the Eid Jamaat, and infrastructure is built with bamboo.

Asked about the Eid Jamaat being held here, Kalabagan Police Station OC Paritosh Saha said, “I don’t know if there was a Jamaat here before, and I haven’t heard.”

Local children and teenagers used to play sports and various social events in the area were taking place in the tetultala floor field of government land of 1 bigha area.

When the initiative was taken to set up Kalabagan Thana in that field recently, a movement was formed under the leadership of Syeda Ratna, an activist from Udichi.

Police in riot gear stormed a rally on April 24, removing hundreds of protesters by truck. The Prime Minister then instructed not to build a police station building there.

As a result, the field is protected for the children and teenagers in the area to play, although the field will remain under the supervision of the police.

Asked if the bamboo infrastructure for Eid Jamaat was under police supervision, the OC said, “No.”