Headlines
Redwan Rahman graduates from FilmdomThe local government minister has instructed to cut the road if necessary to remove the waterRequest to withdraw closure shop at night till EIDThe days of the Western monolithic world are over: PutinLeaders of Germany, France, and Italy in Kyiv to express solidarity‘Presidents of two countries call and pressurized Mbappé’Two U.S. citizens are thought to be missing or taken prisoner in UkraineCOVID: The technical committee suggested lifting some restrictionsPetrol prices hit record highs in the USCanada wants a stern warning against cigarettesThe task force to protect the mountains, demanded the formation of a speedy trial tribunalDepot fire: CID tries to find the cause on CCTVRussian passports are being issued in occupied UkraineFire on Parabat Express: Railroad to Sylhet is normal after 4 hoursAnother 24 children died in Mariupol, Ukraine said
Home Country Eid Yatra by train: Complaints about e-tickets, suffering at the station too
Facebook
Twitter
WhatsApp
Print 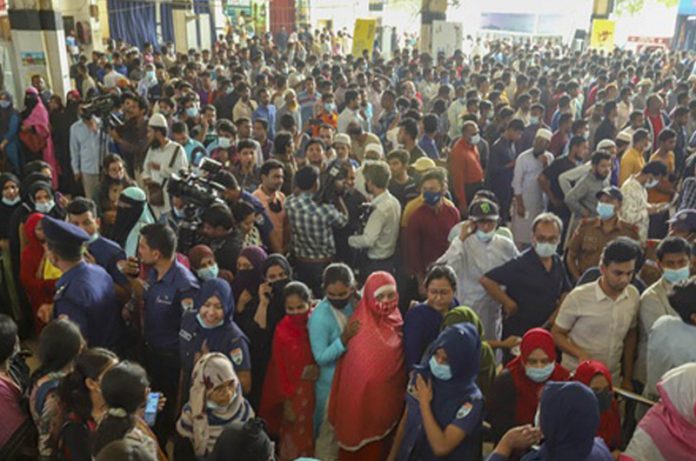 Staff Reporter: Passengers are talking about getting embarrassed online to buy train tickets in advance on the occasion of EID; There is no salvation from suffering even if you go to the counter without getting there.

This EID, advance train tickets from the capital Dhaka to different destinations of the country started selling last Saturday; Half of the tickets are being sold online, and the rest are being sold at four stations in Dhaka.

Passengers are reporting that they will not be able to access the e-ticketing website at 8 am on the first day of ticket sales. After an hour, the website is normal, but by then the online ticket is over. The picture on Sunday and Monday was the same.

Shahporan Islam, a student of Dhaka University, was trying to buy a train ticket online on Sunday for Rajshahi on April 26. He could not access the website even after trying from 8:30 in the morning.

He was spoken to on Monday at the Kamalapur railway station counter, at the advance ticketing line.

Shahparan said, “I needed to go home on the 26th. I haven’t been able to get any tickets since I tried online on Sunday morning. I was able to manage a ticket for the 29th train from 5 am at Kamalapur railway station at 1 pm. ”

Visiting the Facebook group of train passengers ‘Bangladesh Railway Fan Group’, it was seen that many passengers who did not get train tickets online have posted expressing their anger.

Most of them complained that they could not access the website for one and a half hours from the morning. After a while, you can enter, but almost all the tickets are sold out.

Unable to access the e-ticketing site on Monday morning, SM Ghiyasuddin posted in the group. He writes, “I have been trying to enter the site since 8:15 in the morning. I was able to enter at 11 o’clock. Then I went and saw that all the tickets were sold out. So who was able to enter? Who got the ticket? “

However, some people have been seen posting in excitement after being able to buy tickets online.

Kauser Ferdous writes, “It is easier to access the server (website) from desktop or laptop than to login from mobile. Today (Monday) at 9:15 am I was able to buy a ticket for the 29th Chittagong Subarna Express. I still can’t believe I got the ticket. “

Another person in the ‘Bangladesh Railway Family’ Facebook group wrote that even though tickets were to be sold from 8 am, he got the ticket at 5:15 am by visiting the website out of curiosity.

He expressed surprise at how he got the ticket.

Regarding the complaints of the passengers, Farhat Ahmed, the manager of the public relations department of Sahaj.com, said, We’ve been using technology from the beginning to keep the queue management system simple so that the server doesn’t go down. On the first day, there were 500,000 hits per minute online. There were 1 million hits on Sunday and 16 million on Monday. “

Asked about the complaints of passengers not getting tickets, he said, “Look, the stock of tickets is low. That means there are about 13,000 (per day) tickets for sale online. On the first day when people went to the website to buy EID tickets, there were 5 lakh hits. Then the first 13 thousand people got tickets. Those who are after that did not get it. There is nothing wrong with us. When the daily online allotment is over, tickets are no longer available. ”

Several people were found at the Kamalapur railway station on Monday, who had come here the previous day after trying unsuccessfully to buy tickets online.

One of them, Sheikh Imdadul Hossain, said, “I tried to get tickets online on both Saturday and Sunday. After not getting it, I came here on Monday morning and after sitting here, I got a ticket to go to Khulna on the 29th.

“Passengers have been waiting here since Sunday night. What a situation to think about once! People who come and stand at night are getting tickets at noon. Going to the counter, every passenger has to show the documents. They are being checked and given tickets. So the passenger line is taking more time to clear. ”

Even after arriving at the station, many passengers did not get tickets by noon due to long lines. Many are complaining that it is taking a long time to show the national identity card while buying tickets.

In this context, Kamalapur station manager Masud Sarwar said, “In fact, after two years, people are going home on EID. So this time there is a little more anxiety among the passengers. And that is why the number of ticket seekers at the counters is relatively high.

“National identity cards or birth certificates are being used to stop the black market of tickets in the interest of the passengers. In this case, the passengers also have to help us with patience. “

Railway Minister Nurul Islam Sujon is hoping to stop the black market by making identity cards compulsory. While inspecting Kamalapur station on Monday afternoon, he said, “No one has any complaint about today’s ticket. Because we have made the system, there is no chance of any other fraud. You buy tickets with the identity card, I can’t go with your ticket. ”

In response to a question from reporters as to why the picture of suffering from train tickets for Eid Yatra is not changing after so many things, he said, “The number of our trains is less than the demand of the people. 5 million people will travel every day. The capacity of the road is only 1.5 million.

“We are selling tickets according to the capacity of our railways. Not everyone will get a ticket. If 5 lakh people want to go, I can pay 20 thousand there. ”

He visited Kamalapur railway station on Monday afternoon and after visiting the ticket counters, he also spoke to the passengers standing in line. At that time the passengers complained of not getting tickets along with various sufferings.

Journalists also questioned Railway Minister Nurul Islam Sujan about the passengers’ allegations. He said of the crowd, “If people are standing in line today for tomorrow’s ticket, what do we have to do?”

Regarding the allegations of the black market, the minister said, “How will the black market? If I can’t get on your ticket, what do I do with the ticket? If one person buys a ticket for four, he has to submit the ID card for four. ”

The minister was also asked about the allegations of suffering from getting tickets online since the new e-ticketing service provider Sahaj, Synesis, and Vinsen took over the joint venture. In reply, he said that the number of trains was less than the demand at this time.