Headlines
Redwan Rahman graduates from FilmdomThe local government minister has instructed to cut the road if necessary to remove the waterRequest to withdraw closure shop at night till EIDThe days of the Western monolithic world are over: PutinLeaders of Germany, France, and Italy in Kyiv to express solidarity‘Presidents of two countries call and pressurized Mbappé’Two U.S. citizens are thought to be missing or taken prisoner in UkraineCOVID: The technical committee suggested lifting some restrictionsPetrol prices hit record highs in the USCanada wants a stern warning against cigarettesThe task force to protect the mountains, demanded the formation of a speedy trial tribunalDepot fire: CID tries to find the cause on CCTVRussian passports are being issued in occupied UkraineFire on Parabat Express: Railroad to Sylhet is normal after 4 hoursAnother 24 children died in Mariupol, Ukraine said
Home Country Eighth and ninth-grade classes two days a week
Facebook
Twitter
WhatsApp
Print 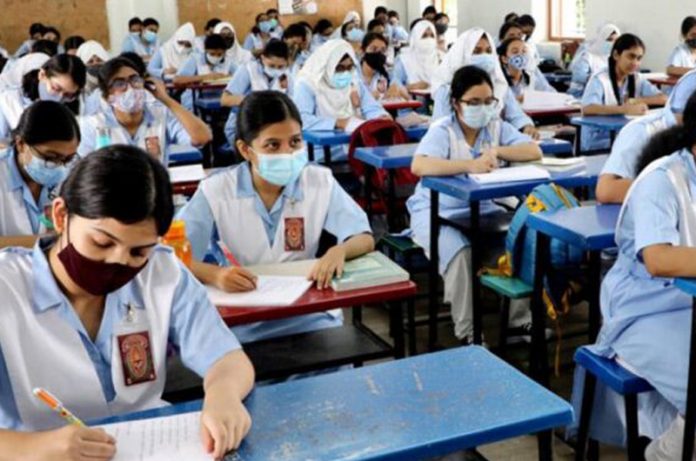 Staff Reporter: A week after the school opened in the midst of the epidemic, the eighth and ninth grades are increasing by one day.

According to the Department of Secondary and Higher Education (Maushi), from now on, classes for eighth and ninth grades will be two days a week instead of one.

Director-General of the Department, Syed Mohammad. A notification signed by Golam Farooq said that the eighth class will be held every Sunday and Thursday. The ninth class will be on Saturday and Wednesday.

Besides, there will be the sixth class on Tuesday and a seventh class on Monday as before.

Classes for Class X and SSC candidates will be six days a week as per the previous decision.

The order was issued to conduct class activities of all government and non-government educational institutions at the secondary level from September 20 according to the new schedule.

The government has reopened schools and colleges since last Sunday after a year and a half of closure due to the coronavirus epidemic. The presence of students brought life back to the classroom.

To avoid the risk of infection, students of all classes are taking classes at different times of the day without returning to class at the same time.