Headlines
Redwan Rahman graduates from FilmdomThe local government minister has instructed to cut the road if necessary to remove the waterRequest to withdraw closure shop at night till EIDThe days of the Western monolithic world are over: PutinLeaders of Germany, France, and Italy in Kyiv to express solidarity‘Presidents of two countries call and pressurized Mbappé’Two U.S. citizens are thought to be missing or taken prisoner in UkraineCOVID: The technical committee suggested lifting some restrictionsPetrol prices hit record highs in the USCanada wants a stern warning against cigarettesThe task force to protect the mountains, demanded the formation of a speedy trial tribunalDepot fire: CID tries to find the cause on CCTVRussian passports are being issued in occupied UkraineFire on Parabat Express: Railroad to Sylhet is normal after 4 hoursAnother 24 children died in Mariupol, Ukraine said
Home More Politics Fakhrul wants unity by forgetting the dilemma and conflict to build the...
Facebook
Twitter
WhatsApp
Print 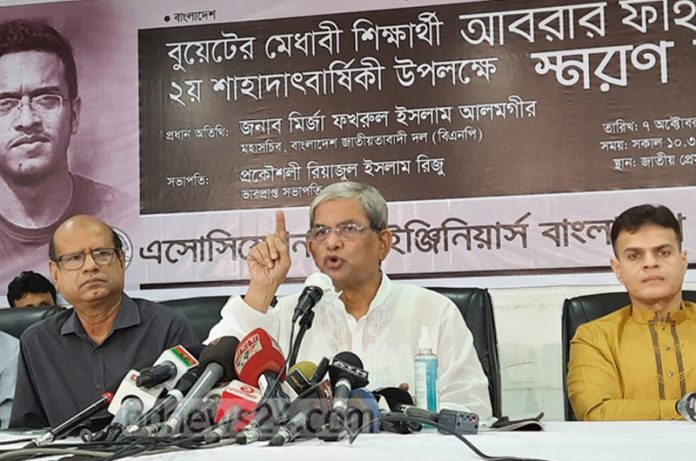 “We have to unite and remove this horrible monstrous government and establish a people’s government, a people’s parliament. I would like to call on you to forget all our dilemmas and unite, and through unity, we will create a strong mass movement. ”

Criticizing the present Awami League government, Mirza Fakhrul said, “Today, they (the government) want to establish a one-party system of government and a vassal state in the same way by putting a wrapper of democracy in a very planned manner and talking about democracy.”

Commenting that the people of this country have never accepted injustice, the BNP secretary-general said, “I believe very much, and I am hopeful that it will never be possible to defeat the people of Bangladesh in this way. This government must step down and hand over power to the people. ”

The conference was organized by the Association of Engineers, Bangladesh at the National Press Club on the occasion of the second anniversary of the death of BUET student Abrar Fahad.

Regarding Abrar’s murder, Mirza Fakhrul said, “Abrar’s death is not an isolated incident. There is a conspiracy going on to make Bangladesh a kneeling state through a far-reaching plan. We have to get out of that conspiracy. Let’s unite, let’s go to that struggle. ”

Condemning the arrest of expatriate journalist Konak Sarwar’s sister Nusrat Shahrin Raka, the BNP general secretary said, “Konak Sarwar escaped torture and saved his life and took refuge in the United States.” From there he publishes some truths through his channel.

That is why this vindictive government is torturing her sister. Kanak’s sister, who is not involved in politics in any way, is a housewife, a mother of three, who was arrested today. Not only the arrest, but he has also now been remanded. ”

In the last few years, Mirza Fakhrul has alleged that many BNP leaders and activists have been ‘tortured in the same manner.