Headlines
Redwan Rahman graduates from FilmdomThe local government minister has instructed to cut the road if necessary to remove the waterRequest to withdraw closure shop at night till EIDThe days of the Western monolithic world are over: PutinLeaders of Germany, France, and Italy in Kyiv to express solidarity‘Presidents of two countries call and pressurized Mbappé’Two U.S. citizens are thought to be missing or taken prisoner in UkraineCOVID: The technical committee suggested lifting some restrictionsPetrol prices hit record highs in the USCanada wants a stern warning against cigarettesThe task force to protect the mountains, demanded the formation of a speedy trial tribunalDepot fire: CID tries to find the cause on CCTVRussian passports are being issued in occupied UkraineFire on Parabat Express: Railroad to Sylhet is normal after 4 hoursAnother 24 children died in Mariupol, Ukraine said
Home Country Farewell to ‘Anandamoyee’
Facebook
Twitter
WhatsApp
Print 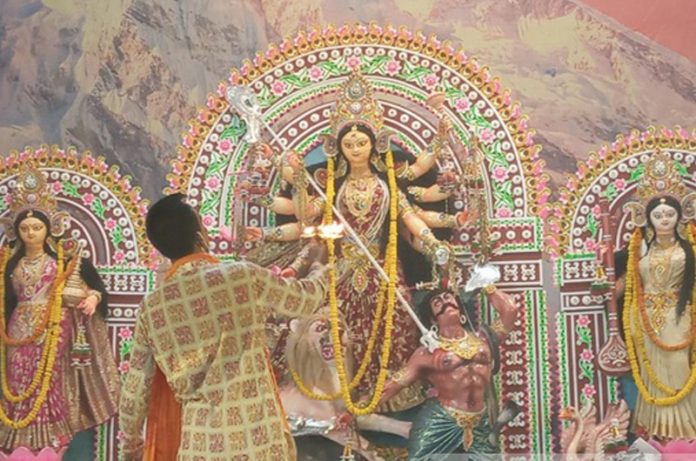 Md. Ashraful Islam: The journey to ‘Father’s house’ in mortals is over; It is time to return to the ‘Kailase Devalaya’ by pressing the cradle.

Vijaya Dashami is going to be the companion of the festival which was started by the Bengali Hindus in the worship of the goddess to wake up on the sixth day.

Kishore Ranjan Mandal, general secretary of the Dhaka Metropolitan Puja Committee, said the classical end of Durga Puja was on Friday from 8 am to 9:11 am on Vijaya Dashami with ‘Vihit Puja’ and later ‘Darpan Bisarjan’.

According to Hindu belief, the ten-armed goddess Durga left Kailash every autumn to kill the demons and come to the mortal world as the daughter of Katyayani Muni. After spending a fortnight with the children at the father’s house, he went back to the temple. These 15 days of Ashwin Shukla Paksha are the festival of Devi Paksha, the mortal world.

The main ritual of Durga Puja started on Monday, the sixth day of Navratri. However, communal incitement on Wednesday and attacks on mandapas and temples in several districts have hurt the spirit of the festival.

After the Maha Nabami, on Friday morning, in the ‘Vihit Puja’ of Vijaya Dashmi, besides the sixteenth puja, the goddess idol is worshiped with jara, pan and shapla dala.

Before returning to the in-laws’ house, the female benefactors greeted the goddess Durga with vermilion, drink, and durba; Through this, it is prayed that the earth will become green after cutting the rust. However, in the epidemic situation, no game of Sindur was organized again.

Along with the joy of ‘Mahishasur Badher’, the melody of sadness is also playing in the mandapa before the departure of the goddess. Devotees have visited various temples in the capital since morning and offered last-minute prayers at the feet of Goddess Durga with tears in their eyes.

Dharmadas Chattopadhyay, the chief priest of the Dhakeswari temple, told reporters, “Mother Durga has won today by killing Mahishasur. That is why today is our day of joy, we celebrate. I wish victory to all irrespective of race, religion, and caste. ”

Due to the epidemic, the procession of Vijaya Dashmi is not taking place again. Idol immersion has been organized at Waizghat, Turag, Demra, and Postagola Ghats of the capital from 3 pm on Friday.

Kishore Ranjan Mandal said, “Considering the Friday prayers today, we have fixed the time of Niranjan at 3 pm after the prayers so that no untoward incidents take place.”

Kishore Ranjan said that after the idol Niranjan, ‘water of peace’ will be brought to the temple; In the evening there will be ‘blessing’ in the mandapa. Through this, the formality of worship will be completed.

The priests said they prayed for relief from the coronavirus epidemic during this puja.

Traditional religions believe that in the Treta age, Lord Rama preached to Goddess Durga to rescue his wife Sita. He rescued Sita by killing Ravana with the help of Durga as per the instructions of Brahma. Durgotsab is the time of the arrival of the goddess.

This puja is also known as Durga puja in autumn, as Rama invoked the goddess in autumn.

According to Hindu belief, Durga came this time on horseback. Kailasa is returning to the temple by swinging.

The scriptures say about the arrival of the goddess on horseback: ‘Chhatrabhangasturangame’. That is, there will be instability in the social, political, and worldly spheres. Chaos, anarchy, accidents, and untimely deaths will increase.

And the scripture says about the result of the goddess’s departure by pressing the cradle: ‘Dolayang Morkong Bhabet’. That is, epidemics, earthquakes, wars, catastrophes, droughts will see the effect, the companion will be death and loss.

This time Durga Puja has been organized in 32,117 mandapas across the country; Compared to last year, the number of mandapas has increased by 1,905. Fort worship has been done in 238 mandapas in Dhaka this year.