Headlines
Redwan Rahman graduates from FilmdomThe local government minister has instructed to cut the road if necessary to remove the waterRequest to withdraw closure shop at night till EIDThe days of the Western monolithic world are over: PutinLeaders of Germany, France, and Italy in Kyiv to express solidarity‘Presidents of two countries call and pressurized Mbappé’Two U.S. citizens are thought to be missing or taken prisoner in UkraineCOVID: The technical committee suggested lifting some restrictionsPetrol prices hit record highs in the USCanada wants a stern warning against cigarettesThe task force to protect the mountains, demanded the formation of a speedy trial tribunalDepot fire: CID tries to find the cause on CCTVRussian passports are being issued in occupied UkraineFire on Parabat Express: Railroad to Sylhet is normal after 4 hoursAnother 24 children died in Mariupol, Ukraine said
Home More Agriculture Farmers who benefit from cucumber
Facebook
Twitter
WhatsApp
Print 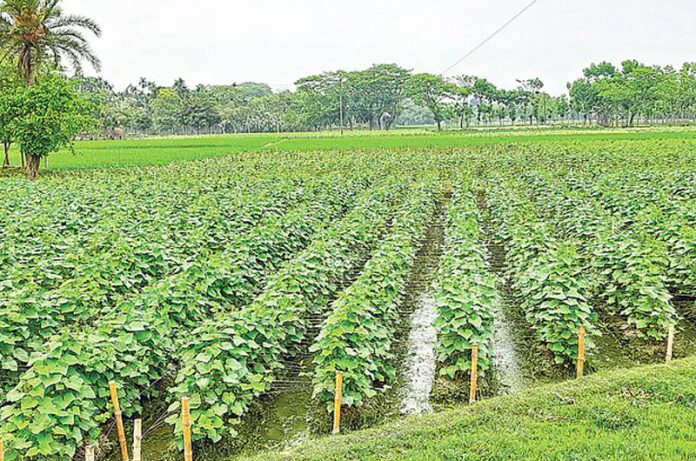 Representative: Cucumber is the main ingredient in salads. For many, this vegetable acts as a great tonic to quench the hunger and thirst of Chaitra. There is a huge demand for vegetables in the market. And since there is always demand for cucumber, farmers are also benefiting by cultivating this vegetable.

Cucumber has become a favorite crop of Chaitra manga harvesting farmers in the char areas of Nandail and Ishwarganj upazilas of Mymensingh.

Speaking on the Nandail-Trishal regional highway, said the farmer of Bahadur Nagar village of Moazzempur Union. With Siddique Miah. He said that every ten hundred acres of land cost about 12 thousand rupees to grow cucumbers. Yield starts in 40-45 days. It is sold for 50 to 60 thousand rupees. Wholesalers from Karwan Bazar in the capital came here and bought cucumbers. Cucumbers are sold for a whole month, he added. So this crop is becoming profitable for the farmers.

It can be seen on the ground that cucumber seeds have been planted about one-and-a-half feet above ground level. This height has been created by cutting the soil into piles.

Talking to some farmers, it is learned that if it rains untimely, waterlogging may occur in the land. When the water collects, the rotting cucumber tree will die. This height has been made by cutting the soil for him. Once the soil has dried up due to drought, then frozen or irrigation water can be used.

Nargis Akhter, 25, wife of farmer Fazlul Haque, said she came to see the land at least once a day. Her husband has planted cucumbers in 20th-century land. Cucumbers were destroyed in a fire last year. Many farmers have been affected. If you can sell the harvest this time in the market, you will be able to make up for the loss of the last time. In addition to cucumbers, other farmers have also cultivated pumpkins, sweet pumpkins, and squash. These three vegetables are quite expensive in the market. Karala 40 to 50 rupees per kg. Pumpkins are sold for Rs 30-40 each and a small sweet pumpkin for Rs 30-40

Getting acquainted with the technology. Again, they are able to save their family from the clutches of Mangar in the month of Chaitra.