Headlines
Redwan Rahman graduates from FilmdomThe local government minister has instructed to cut the road if necessary to remove the waterRequest to withdraw closure shop at night till EIDThe days of the Western monolithic world are over: PutinLeaders of Germany, France, and Italy in Kyiv to express solidarity‘Presidents of two countries call and pressurized Mbappé’Two U.S. citizens are thought to be missing or taken prisoner in UkraineCOVID: The technical committee suggested lifting some restrictionsPetrol prices hit record highs in the USCanada wants a stern warning against cigarettesThe task force to protect the mountains, demanded the formation of a speedy trial tribunalDepot fire: CID tries to find the cause on CCTVRussian passports are being issued in occupied UkraineFire on Parabat Express: Railroad to Sylhet is normal after 4 hoursAnother 24 children died in Mariupol, Ukraine said
Home Country Fear of EID journey on the ‘suffering’ highway
Facebook
Twitter
WhatsApp
Print 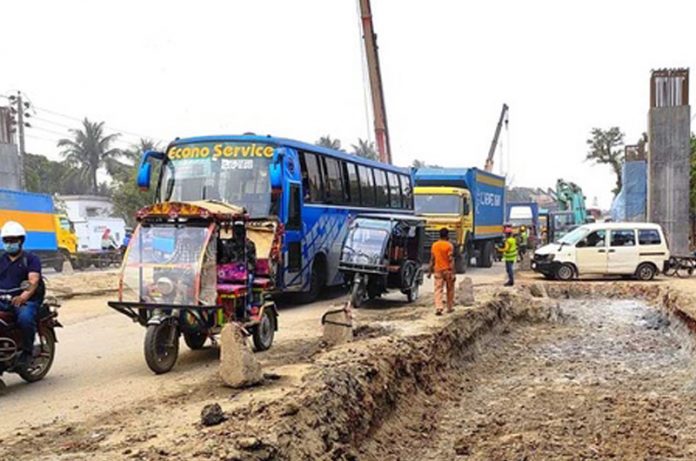 Gazipur Representative: The distance of Dhaka-Mymensingh road is about 120 kilometers; Passengers traveled this route in two hours. It takes five-six hours after the commencement of work on the mega project BRT. Due to heavy traffic before the weekend, it stops at eight or nine hours.

Passengers and transport owners and workers of this route, who have been suffering for almost a decade, are fearing the same fate this EID. However, the BRT authorities say that work is underway to fix the road with the predominance of EID.

The Bus Rapid Transit (BRT) project has been running since 2012 at a distance of 20 km from Hazrat Shahjalal International Airport to Chandna Crossroads in Gazipur. The four-year project has been completed several times and the budget has been doubled so far.

There is no problem with the eight-kilometer road from the airport to Turag bridge. But the picture of the next 12 kilometers of road is horrible; Passengers have to sit in a traffic jam for hours on end.

Sultan Ahmed Sarkar, president of Gazipur District Road Transport Workers-Employees Union, said, “Chandna crossroads is 12 kilometers from Tongi. About three kilometers from Tongi the road is ditches and broken but not in the rest. Work on the BRT project on the road has been going on for the last few years. Due to which it now takes three to four hours to cross 12 kilometers. Sometimes more than that. ”

“As there are no restrictions on the coronavirus epidemic this time, several times more people will go home this time than in the last two years. This will increase the number of passengers and vehicles on the road. As a result, there will be extreme suffering on this unfinished highway during the EID procession. ”

Gazipur Metropolitan Police (GMP) Deputy Commissioner (DC-Traffic) Abdullah Al Mamun said if the mega-project runs on the road, there will be temporary problems in the movement of vehicles. The BRT authorities have been asked to identify some problems and resolve them expeditiously.

Citing a survey, the police official said, “An average of 60,000 vehicles pass through the Dhaka-Mymensingh highway every 24 hours. And before EID, this number increases several times.

According to the BRT authorities, the work has been going on since 2012. The project costing TK 2,040 crore was supposed to be completed in December 2016. Later, the term was extended to December 2016 and the expenditure increased to 264 crores 82 lacs 14 TK. The last two-phase project is expected to be completed in December this year, with increased time and cost. It will have 25 stations in different places.

At present 18 stations are being constructed in the middle of the road at several places including Tongir Hossain Market, Kunia, Barbari, Board Bazaar, and Chaydana. Gazipur Metropolitan Police Deputy Commissioner (DC-Traffic) Abdullah Al Mamun said the roads in those areas were narrowing and traffic was being disrupted.

He said apart from this, there were two lanes towards Mymensingh in some areas west of Station Road, including Banspatti in Gazipura, but they were not matched. There is space between the two lanes. No road has been constructed from the front of Cherag Ali Anudwip CNG filling station to Mill Gate in the Dhaka-bound lane. This old road is full of ditches in places.

Due to not covering the mouth of the drain built on the side of the highway, minor accidents are also taking place. Apart from this, waterlogging occurs in front of Kunia, Tayrunnesa Medical, Hossain Market, Bhogra, Basan, Madhumatia Road, and Tongi Hospital due to light rain.

An on-site inspection from Tongi’s Turag Bridge to Chandna Chowrasta on Tuesday revealed that the flyover above and the carpeting below the BRT project have not been completed in many places yet. Due to the work, the four-lane highway has become a three-lane of two-lane. The speed of vehicles is very slow, causing traffic jams.

The Chandna crossroads area is quite congested. Due to the BRT project, the vehicles are not moving at their normal speed. Traffic jams on both sides.

Vehicles were seen moving at normal speed on both sides of the road at Bhogra bypass. However, when the traffic pressure increases, traffic jams occur on narrow roads.

After that the construction work of the BRT project station was going on in Gachha, Malek’s house, Board Bazaar, Kunia Barbari area, and the vehicles could not run at normal speed.

In the Gazipura area, vehicles are running intermittently on the narrow road on both sides as the road construction block has been left in the middle of the road. The same situation happened in front of Cherag Ali Aftab CNG station and truck stand across Gazipura.

The road from Mill Gate to Turag Bridge in Tongi has not been carpeted for one and a half kilometers. Meanwhile, the vehicles are moving.

Akram Hossain, a resident of Gazipur area and a local businessman, said: As the roads on both sides become smaller, traffic jams are often created here. Therefore, if the blocks are removed before EID, the vehicles will be able to run at normal speed. ”

ENA Paribahan bus driver Abu Taher said, “One of the major problems on the Dhaka-Mymensingh road is waterlogging. There is a risk of rain from the beginning of Boishakh. As such, it may rain before EID. If it rains, you will have to suffer from Tongi to Cherag Ali.

There are many industries from Tongi to Bhaluka in Gazipur. Of these, Gazipur alone has more than five thousand factories. Millions of workers live here. These workers will go home during the EID holidays. Many workers take their families home on public buses. Many times, the workers of the organization go home in reserve vehicles.

GMP DC (Traffic) Abdullah Al Mamun said there would be many problems if the workers were given EID leave together. Leave at different times. And workers’ reserve buses cannot be parked on the highway.

BRT project director ASM Ilyas Shah told reporters, “Most of the work on the entire project has been completed. Now the pace of work has been further increased by giving priority to EID Yatra. It has been instructed to finish the carpeting on the lower part of the road before EID. ”

“Hopefully, the road will be made fully operational before the EID journey.”

About the BRT project:

Under the 20-year Transport Plan (STP) made for Dhaka in 2005, an initiative was taken to construct a separate bus lane on the 20 km road from the airport to Gazipur. This is the BRT project, which was approved by the Executive Committee of the National Economic Council (ECNEC) on December 1, 2012.

Under the project, four kilometers of elevated BRT lanes, six flyovers, and 25 BRT stations will be constructed from Gazipur to the airport. There will be two BRT lanes, four mixed traffic lanes, two non-mechanical lanes, and 75 connecting roads on both sides of the road including subways for pedestrians and other facilities. The work has been given to four companies.

BRT project director. Mohirul Islam Khan said that even though the project was approved in 2012, ancillary activities including the design of the project were done till 2018. And in November 2016, the work order for this project was given to the contractors. Work is going on as per the work schedule.

The project is expected to be completed by December 22, 2022. Now, the contractors of this project are in financial crisis due to the increase in the price of construction materials. Even then, overall cooperation is being provided to overcome this liquidity crisis.

Mohirul Islam Khan hoped that the project would be completed on time if new obstacles were not created.