Headlines
The local government minister has instructed to cut the road if necessary to remove the waterRequest to withdraw closure shop at night till EIDThe days of the Western monolithic world are over: PutinLeaders of Germany, France, and Italy in Kyiv to express solidarity‘Presidents of two countries call and pressurized Mbappé’Two U.S. citizens are thought to be missing or taken prisoner in UkraineCOVID: The technical committee suggested lifting some restrictionsPetrol prices hit record highs in the USCanada wants a stern warning against cigarettesThe task force to protect the mountains, demanded the formation of a speedy trial tribunalDepot fire: CID tries to find the cause on CCTVRussian passports are being issued in occupied UkraineFire on Parabat Express: Railroad to Sylhet is normal after 4 hoursAnother 24 children died in Mariupol, Ukraine saidBelayet, who is in his fifties, has been given a good admission test against young
Home Country Fire on Parabat Express: Railroad to Sylhet is normal after 4 hours
Facebook
Twitter
WhatsApp
Print 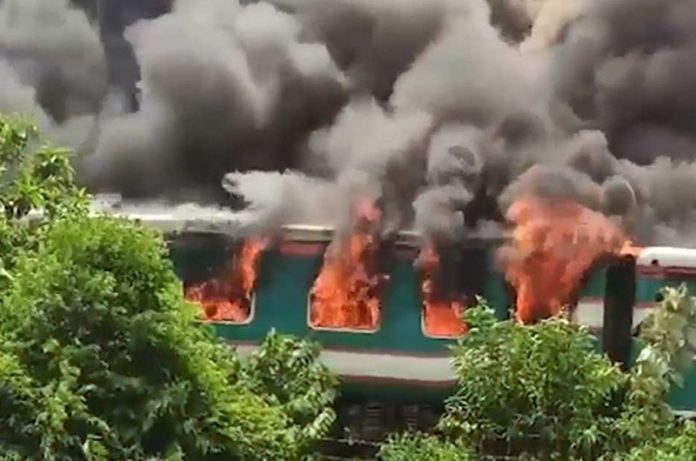 Moulvibazar Representative: Four hours after the fire broke out in the carriage of ‘Parabat Express’ train in Shamsernagar Upazila of Moulvibazar, train communication with Sylhet has returned to normal.

A fire broke out in a train carriage near Shamsernagar Airport at 1 pm on Saturday; After that, the railway communication with Sylhet was stopped all over the country.

Four units of fire service and civil defense work to control the fire. They brought the fire under control in an hour’s effort.

The bogie was detached from the two trains after the fire broke out. The train with the two bogies and other bogies left for Kulaura station around 4 pm. After the other work, the train was started, said Feroz Dohar, senior deputy assistant engineer of the railway.

According to the railway authorities, the train was going from Dhaka to Sylhet. The fire started from the food truck of the train. The fire then spread to a nearby passenger carriage. Then the driver stopped the train.

However, no one was injured. The passengers are all safe.

He told reporters that the committee has been asked to submit a report within seven working days.