Headlines
The local government minister has instructed to cut the road if necessary to remove the waterRequest to withdraw closure shop at night till EIDThe days of the Western monolithic world are over: PutinLeaders of Germany, France, and Italy in Kyiv to express solidarity‘Presidents of two countries call and pressurized Mbappé’Two U.S. citizens are thought to be missing or taken prisoner in UkraineCOVID: The technical committee suggested lifting some restrictionsPetrol prices hit record highs in the USCanada wants a stern warning against cigarettesThe task force to protect the mountains, demanded the formation of a speedy trial tribunalDepot fire: CID tries to find the cause on CCTVRussian passports are being issued in occupied UkraineFire on Parabat Express: Railroad to Sylhet is normal after 4 hoursAnother 24 children died in Mariupol, Ukraine saidBelayet, who is in his fifties, has been given a good admission test against young
Home Country Former state minister Murad forehead was fractured when the ceiling fan fell
Facebook
Twitter
WhatsApp
Print 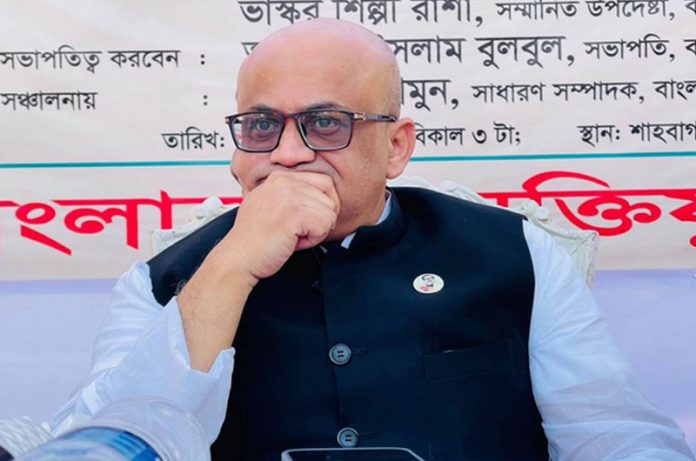 Jamalpur representative: In just a few months, many things have changed, so the ceiling fan in the living room of your home will also open!

That is what happened to Jamalpur MP Murad Hasan, who lost the post of State Minister for Information due to his indecent remarks.

The disaster happened on Thursday night. Murad was talking to some followers at his house at Daulatpur in Sarishabari Upazila of Jamalpur.

He said on the telephone, “Suddenly the ceiling fan opened and hit my forehead. Later the doctor came and did three stitches. ”

“There is nothing to worry about,” he said. Even then, he has been kept under observation. ”

Murad Hasan, who has a medical degree, went to Parliament for the first time from the Jamalpur-4 constituency in the 2008 elections.

Murad had to lose his post of state minister in December last year after an actress was threatened on the telephone and audio of indecent remarks was leaked. The local MP was also relieved from the post of Jamalpur Awami League.

Murad left the country for Canada on the night of December 9 amidst various dramas. But he was unable to enter Canada or the United Arab Emirates and had to return home two days later. Since then, he has been hidden from public view.