Headlines
Redwan Rahman graduates from FilmdomThe local government minister has instructed to cut the road if necessary to remove the waterRequest to withdraw closure shop at night till EIDThe days of the Western monolithic world are over: PutinLeaders of Germany, France, and Italy in Kyiv to express solidarity‘Presidents of two countries call and pressurized Mbappé’Two U.S. citizens are thought to be missing or taken prisoner in UkraineCOVID: The technical committee suggested lifting some restrictionsPetrol prices hit record highs in the USCanada wants a stern warning against cigarettesThe task force to protect the mountains, demanded the formation of a speedy trial tribunalDepot fire: CID tries to find the cause on CCTVRussian passports are being issued in occupied UkraineFire on Parabat Express: Railroad to Sylhet is normal after 4 hoursAnother 24 children died in Mariupol, Ukraine said
Home Sports Gayle’s glimpse, Lewis’s storm of 6 sixes
Facebook
Twitter
WhatsApp
Print 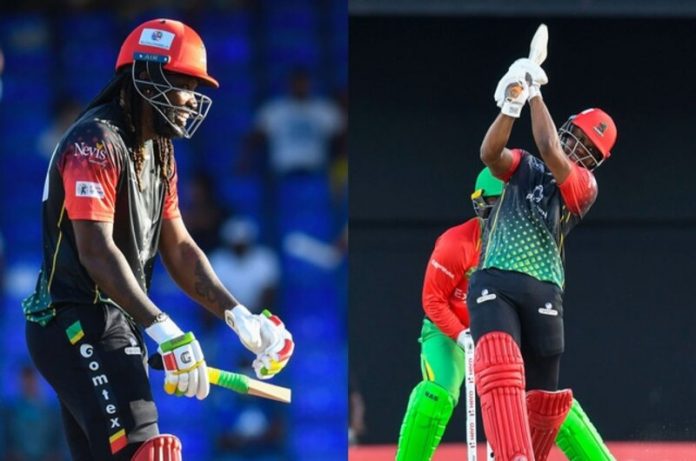 Sports Desk: The goal was not very easy. But the devastating batting of Evin Lewis and Chris Gayle made it effortless. Where Lewis had finished in the previous match, it was as if he started the bowlers again. Gayle gifted stormy innings early on. The Patriots beat St. Kitts and Nevis in the final of the Caribbean Premier League (CPL).

In the second semi-final of the CPL, Lewis played an unbeaten innings of 7 off 39 balls with 6 sixes and 3 fours in St. Kitts on Tuesday. Gayle hit 5 fours and 3 sixes in 42 balls.

St. Kitts and Nevis won by 6 wickets with 13 balls to spare in the Guyana Amazon Warriors’ 18-run stand.

Lewis had played an unbeaten innings of 102 off 51 balls in the previous match. He started the storm by chasing runs in the semi-final match. In the first three overs, he has two sixes. Gayle’s run was then 1 off 8 balls.

Gayle got pacer Odin Smith in the fourth over. 23 runs came from four overs and one six. In the next over, Gayle hit Imran Tahir with sixes and fours and Lewis hit sixes.

Gayle was out in the eighth over, but Lewis’s violence continued. St. Kitts and Nevis Patriots did not have much speed to win.

Lewis touched fifty off 24 balls, including six sixes. He later returned with the team’s victory. Captain Dwayne Bravo made 34 off 31 balls.