Headlines
Redwan Rahman graduates from FilmdomThe local government minister has instructed to cut the road if necessary to remove the waterRequest to withdraw closure shop at night till EIDThe days of the Western monolithic world are over: PutinLeaders of Germany, France, and Italy in Kyiv to express solidarity‘Presidents of two countries call and pressurized Mbappé’Two U.S. citizens are thought to be missing or taken prisoner in UkraineCOVID: The technical committee suggested lifting some restrictionsPetrol prices hit record highs in the USCanada wants a stern warning against cigarettesThe task force to protect the mountains, demanded the formation of a speedy trial tribunalDepot fire: CID tries to find the cause on CCTVRussian passports are being issued in occupied UkraineFire on Parabat Express: Railroad to Sylhet is normal after 4 hoursAnother 24 children died in Mariupol, Ukraine said
Home Country High-speed 3G and 4G internet services are closed across the country
Facebook
Twitter
WhatsApp
Print 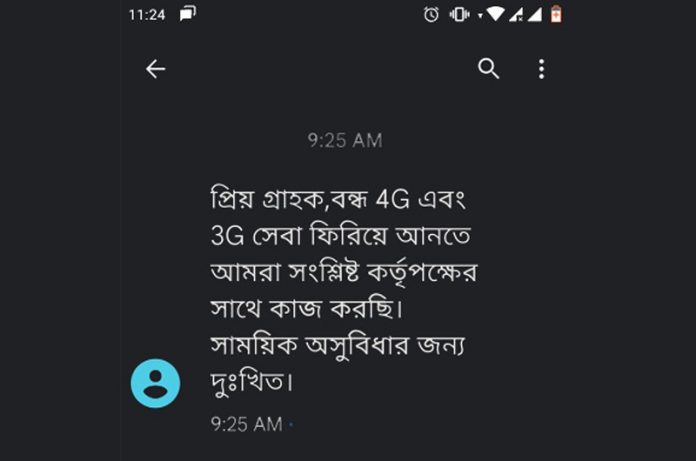 Md. Ashraful Islam: Mobile phone subscribers across the country are unable to use high-speed 3G and 4G internet.

Readers from different districts of the country have said that they have not been able to get 3G and 4G internet on their mobiles since Friday morning. However, the 2G service is still in operation.

High-speed internet services in six districts have been shut down since Wednesday after attacks and vandalism of Durga Puja mandapas and temples in several districts, including Comilla, two days ago after communal incitement spread on social media.

Similar steps have been taken across the country since the morning of Vijaya Dashmi on Friday, with mobile phone operators talking to several senior officials.

They say they have shut down 3G and 4G internet services since 5 am on Friday, following instructions from the telecom regulator BTRC.

One of the telco officials said, “BTRC has asked to stop the service till further orders.”

BTRC officials did not want to comment on the matter. And Posts and Telecommunications Minister Mustafa Jabbar has avoided the issue.

He told bdnews24.com on Friday morning that the problem could be due to a technical glitch and hoped it would be resolved soon.

More than half of the 16 crore mobile phone subscribers in the country use Grameenphone.

On Friday morning, Grameenphone sent an SMS to its customers saying, “We are working with the concerned authorities to bring back the closed 4G and 3G services.” Sorry for the inconvenience. “

Pictures and videos of alleged ‘insulting the Qur’an’ at a temple in Comilla spread quickly on Facebook on Wednesday morning. The temple was then attacked, leading to clashes with police.

Although a puja mandapa was started on the banks of Nanua Dighi in Comilla, several other temples and mandapas were attacked till the afternoon. Similar incidents took place in Chandpur, Chittagong, Cox’s Bazar, Bandarban, Moulvibazar, Gazipur, Chapainawabganj, and several other districts.

After the issue came to light, Posts and Telecommunications Minister Mustafa Jabbar said that the government would take immediate steps to curb ‘propaganda’ on social media.

He told bdnews24.com on Wednesday that he had been in constant touch with Facebook authorities since the incident.

“It has already been recommended to block more than 100 Facebook links. We hope these will stop. “

He said that the internet speed in the area had been brought under control immediately after the incident in Comilla so that the ‘non-propagandists’ would not get a chance.

According to the latest regulator BTRC, the total number of internet users in the country has crossed 12.5 crores; Of these, 11 crores 54 lakh subscribers use mobile internet.