Headlines
Redwan Rahman graduates from FilmdomThe local government minister has instructed to cut the road if necessary to remove the waterRequest to withdraw closure shop at night till EIDThe days of the Western monolithic world are over: PutinLeaders of Germany, France, and Italy in Kyiv to express solidarity‘Presidents of two countries call and pressurized Mbappé’Two U.S. citizens are thought to be missing or taken prisoner in UkraineCOVID: The technical committee suggested lifting some restrictionsPetrol prices hit record highs in the USCanada wants a stern warning against cigarettesThe task force to protect the mountains, demanded the formation of a speedy trial tribunalDepot fire: CID tries to find the cause on CCTVRussian passports are being issued in occupied UkraineFire on Parabat Express: Railroad to Sylhet is normal after 4 hoursAnother 24 children died in Mariupol, Ukraine said
Home More Aviation Hijacking: Pistol ‘plastic toy made in Bangladesh’
Facebook
Twitter
WhatsApp
Print 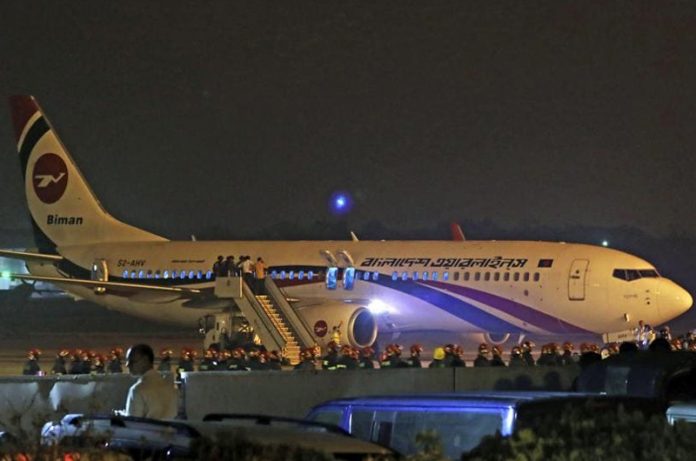 Md. Ashraful Islam: The pistol recovered from Palash Ahmed, who was killed in a commando operation in the hijacking incident in Chittagong, was reported by the CID’s forensic department as a plastic toy made in Bangladesh.

The department’s special superintendent of police, Rumana Akhtar, said on Wednesday: The magazine of the pistol can be separated. Inside, small plastic granules like bullets can be kept. There are also a few words. It’s not a toy at all. “

It was handed over to the Counter-Terrorism Unit of the Chittagong Metropolitan Police (CMP) on Tuesday after the CID’s forensic department reported their ballistic tests on March 8. This specialized unit of the police is investigating the hijacking incident.

Investigating officer Inspector Rajesh Barua said, “We received the ballistic report last night. It was said there was a toy pistol. There is no opportunity to use gunpowder or shoot. ”

On the toy pistol was written in English – ‘Song series Osaka, Aman Industries, Made in Bangladesh’.

A Biman Bangladesh Airlines Boeing-737 with 147 passengers left Dhaka for Chittagong on 24 February. The plane was supposed to reach Dubai at night via Chittagong.

But flight BG-147 made headlines in the international media soon after landing at Shah Amanat Airport in Chittagong. Authorities say a young man armed tried to hijack the plane.

After about two hours of tension, the commando operation ended the crisis. Army and Air Force officials said the young man with the pistol was killed. After checking the fingerprints, the RAB said the next day, the young man’s name was Palash Ahmed, his home was in Narayanganj.

The two passengers told reporters that the hijacker was threatening the passengers with a pistol. They also heard gunshots. However, Chittagong Police Commissioner Mahbubar Rahman said that night that the pistol was a toy.

A case filed by the Civil Aviation Authority (CAA) at Patenga Police Station in Chittagong later said, “An unidentified miscreant (Palash) ran through the middle of the plane and tried to enter the front cockpit. Bomb and weapon-like objects were seen in his hands.

The miscreant shouted that the Prime Minister should listen to some of his demands. Otherwise, he threatened to destroy the plane with the explosives he had.

The bomber detonated two explosives at the time.

The deceased Palash was the husband of actress Shimla, who divorced him three and a half months ago.

The statement described the accused’s crime as “Palash Ahmed tried to hijack the plane by intimidating the pilot, cabin crew and passengers by threatening them with weapons and ammunition.”