Headlines
Redwan Rahman graduates from FilmdomThe local government minister has instructed to cut the road if necessary to remove the waterRequest to withdraw closure shop at night till EIDThe days of the Western monolithic world are over: PutinLeaders of Germany, France, and Italy in Kyiv to express solidarity‘Presidents of two countries call and pressurized Mbappé’Two U.S. citizens are thought to be missing or taken prisoner in UkraineCOVID: The technical committee suggested lifting some restrictionsPetrol prices hit record highs in the USCanada wants a stern warning against cigarettesThe task force to protect the mountains, demanded the formation of a speedy trial tribunalDepot fire: CID tries to find the cause on CCTVRussian passports are being issued in occupied UkraineFire on Parabat Express: Railroad to Sylhet is normal after 4 hoursAnother 24 children died in Mariupol, Ukraine said
Home Technology How does BTRC remove ‘offensive’ content?
Facebook
Twitter
WhatsApp
Print 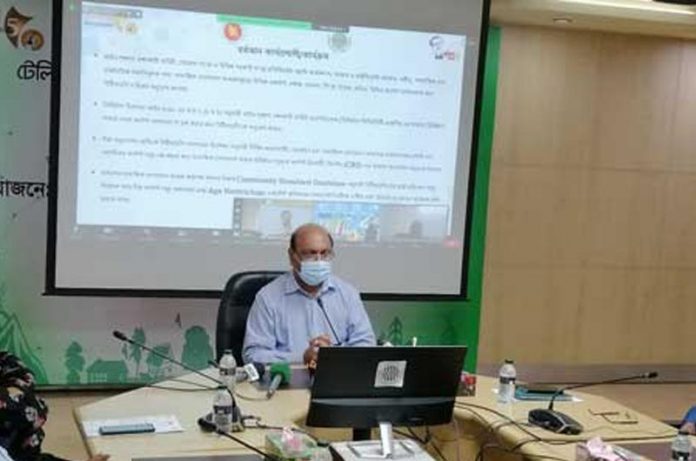 Senior Reporter: BTRC, the regulator of the telecommunications sector, has given a detailed account of how much the Bangladesh government can do and how much it is doing to remove ‘offensive’ content from websites and social media.

The commission says it can block any website from Bangladesh if it wants. Such measures are being taken in the case of pornography and gambling sites. But if you want to remove the content on social media, you have to rely on their will.

“We are in a kind of helplessness, it is social media, we are dependent on their grace,” Posts and Telecommunications Minister Mustafa Jabbar told a news conference at the BTRC office on Monday on social media, content, and accessories.

The High Court on Sunday expressed outrage over the BTRC’s role in removing personal videos and photos that went viral on various online platforms, including social media. A day later, the commission organized a press conference.

Brigadier General Nasim Parvez, Director General (Systems and Services) of the Commission, shared information on how the BTRC complained about social media, content, and ancillary issues and how it was removed.

“Through the website and social media, various offensive content including anti-government, anti-state, social, political, pornographic, cultural or religious provocative and extremist content is being promoted which is increasing at an alarming rate every day,” he said.

Nasim Parvez said that children and teenagers are spending a lot of time on social media or playing games online, which is hampering their studies as well as their normal mental development.

Whose complaint does BTRC hear?

The press conference was informed that with the approval of the government, sensitive/offensive websites, domains, blogs, and links were blocked through the Cyber ​​Threat Detection and Response System of the Department of Telecom (DOT) under the Department of Posts and Telecommunications.

As a result, those websites or links are not open or seen from Bangladesh. But in other parts of the world, it remains open.

The Cyber ​​Threat Detection and Response (CTDR) system has already blocked access to more than 22,000 pornographic and online gambling sites from Bangladesh, the BTRC director-general said.

And if you want to remove social media posts?

The BTRC requests through the Content Reporting System (CRS) of the concerned social media company to close or remove any account or any post, photo, video content on social media as per the instructions of the government.

The company then decides what it will do according to its own community standard guidelines. After analyzing the complaint, they can remove, block or control the content, suspend or close the account, and not respond to requests.

Since social media companies are not registered in Bangladesh, they have no obligation to comply with the request of the Bangladesh government. However, they can also make requests if they are in line with their community standard guidelines.

The BTRC recently contacted Facebook to direct the Supreme Court to remove insulting posts and objectionable content about the Chief Justice of Bangladesh. In the process, the offensive posts were removed from five Facebook accounts and one other account.

Nasim Parvez said that in the last year, the Bangladesh government has requested the closure of 16,736 offensive Facebook links. Of these, 4,006 links have been closed.

In 62 cases, YouTube authorities responded to requests to block 431 YouTube links. In addition, links to 1,060 websites have been blocked at this time.