Headlines
Redwan Rahman graduates from FilmdomThe local government minister has instructed to cut the road if necessary to remove the waterRequest to withdraw closure shop at night till EIDThe days of the Western monolithic world are over: PutinLeaders of Germany, France, and Italy in Kyiv to express solidarity‘Presidents of two countries call and pressurized Mbappé’Two U.S. citizens are thought to be missing or taken prisoner in UkraineCOVID: The technical committee suggested lifting some restrictionsPetrol prices hit record highs in the USCanada wants a stern warning against cigarettesThe task force to protect the mountains, demanded the formation of a speedy trial tribunalDepot fire: CID tries to find the cause on CCTVRussian passports are being issued in occupied UkraineFire on Parabat Express: Railroad to Sylhet is normal after 4 hoursAnother 24 children died in Mariupol, Ukraine said
Home Entertainment How far is Abdul Alim’s song rescued from Pakistan?
Facebook
Twitter
WhatsApp
Print 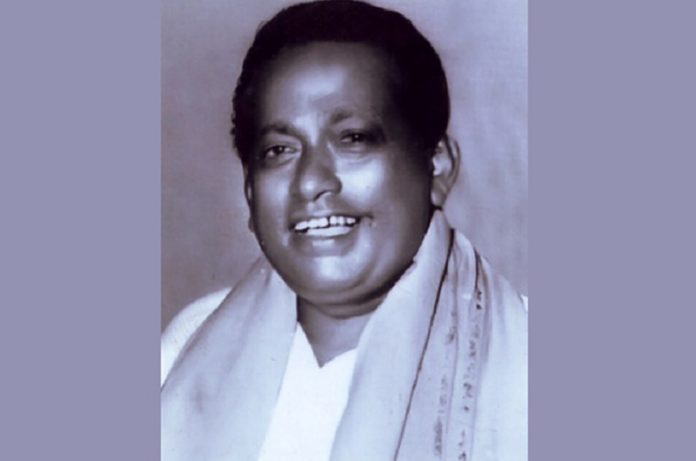 Entertainment Desk: A few of the hundreds of songs by folk musician Abdul Alim, aired on Karachi Radio and Pakistan Television (PTV) in West Pakistan in the 1960s, were brought to the country a few records three years ago; The family of the Ekushey Medal winner hopes that the rest of the records will be recovered with the help of the government.

Before independence, Abdul Alim was very popular among the listeners in Bangladesh as well as in West Pakistan; He used to sing regularly on Karachi Radio and PTV.

Folk musician Nurjahan told bdnews24.com that three years ago, Abdul Alim was interviewed and some of his songs were recorded in Pakistan in collaboration with Prime Minister Sheikh Hasina’s international affairs adviser Gowher Rizvi and the then High Commissioner to Pakistan Sohrab Hossain.

Salahuddin Ahmed, additional director general (programming) of Bangladesh Betar, said he did not know the information.

According to Nurjahan, some of Abdul Alim’s songs have been recovered by the state as well as individual initiatives, but at least 70 of them remain in Pakistan.

Nurjahan Alim said, “Abdul Alim’s songs are the wealth of Bangladesh, why his songs will be in that country? Some of these songs may have been lost. We got some songs with the official initiative. I am trying to bring the rest officially. Besides, I am trying to bring it personally. ”

Alim’s family has already applied to the Ministry of Information and Broadcasting to recover the remaining songs, he said.

Asked about the progress of the rescue operation, Bangladesh High Commissioner to Pakistan Ruhul Alam Siddiqui told bdnews24.com, “I have been here for a year. I have no information about this. I don’t know if Mr. Abdul Alim was in the process of taking any song from here. ”

Nurjahan said it was not possible to rescue all the songs at that time due to the unfavorable political situation in Pakistan.

“No one wants to go because of the political situation. Then there was Mr. Sohrab; He did then. If Abdul Alim is not evaluated on his own, it cannot be done by anyone. ”

Researcher Shamsul Alam Babu said Bangla songs were recorded on Karachi radio and studios before the establishment of FDC and gramophone in Dhaka.

“There are still a lot of songs in many places around the world that haven’t been saved yet. Abdul Alim went to sing in Pakistan as well as Europe. They have been recorded in those areas. No one is looking for them. All songs need to be saved. ”

Abdul Alim was very popular in Pakistan in the sixties. His song ‘Next Place Land’ was used in a Pakistani serial a few years ago. In the words of lyricist Abdul Latif, the song sung by Abdul Alim has been heard by the listeners of Bangladesh as well as Pakistan for decades.

Abdul Alim was born on 26 July 1931 in the village of Talibpur in Murshidabad, India. This artist used to sing kirtan in different festivals. After that, Leto sang for Jatra Dal. Later he came to Calcutta and got the company of Kazi Nazrul Islam and Abbasuddin.

After partition, Alim settled in Dhaka. He started his career as a staff artist at Betar. He has acted in Bangladesh’s first film ‘Mukh O Mukhosh’. Since then, he has sung in many more movies. Among the folk songs sung by him, spiritual and mystical Murshid songs have taken place in the minds of the listeners.

Abdul Alim died on 5 September 1984. In recognition of his contribution to music, the Bangladesh government posthumously awarded him the Ekushey Padak in 1986.